The United Arab Emirates has become the first of the Persian Gulf’s petrostates to commit to eliminating planet-warming emissions within its borders.

“The UAE net-zero initiative will provide us with precision and boost our efforts to accelerate the energy transition,” the Department of Energy of Abu Dhabi, the capital, said in a statement.

The new target aligns the UAE with most major economies and the deadline scientists say gives the world some chance of avoiding the worst effects of global warming. The commitment is the latest from countries ahead of United Nations-sponsored climate talks starting later this month in Glasgow, Scotland, and known as COP26.

It’s a bet that will probably play well with the U.S., European Union and U.K., who have pushed fossil-fuel producers to accelerate plans to reduce their emissions. It could also put pressure on neighboring Saudi Arabia, the world’s biggest oil exporter, to make a similar pledge.

The UAE relies heavily on the export of oil and gas, which makes up about 30% of its gross domestic product, despite decades of efforts to diversify the economy. The nation of 10 million people also has one of the world’s highest emissions rates per capita — ahead of the likes of Australia and the U.S.

It’s a “very ambitious step,” said Jim Krane, author of ‘Energy Kingdoms: Oil and Political Survival in the Persian Gulf’ and a fellow at Houston’s Rice University. “For one of the world’s most oil-dominated economies to declare a net-zero goal is really a sign of the times. It’s going to buy it a lot of influence.” 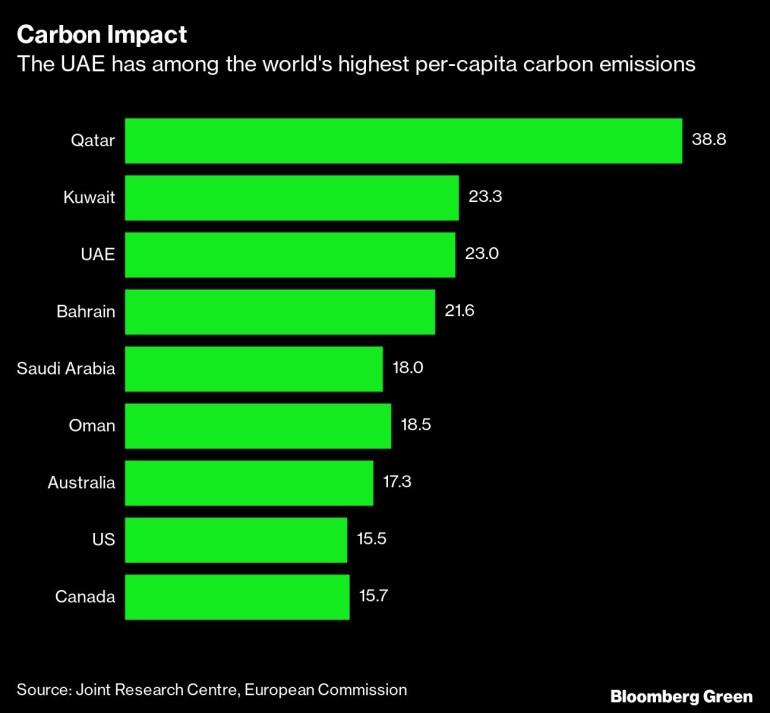 The government doesn’t plan to move away from fossil fuels any time soon. State energy giant Abu Dhabi National Oil Co. is set to increase its oil-production capacity to 5 million barrels a day from just over 4 million within a decade.

Yet that expansion could still be compatible with a net-zero goal as defined by UN rules, which only account for emissions generated within a country’s borders. The UAE would only be responsible for implementing measures to cut emissions from the extraction and processing of exported fuel.

“That’s the messaging: oil and gas are part of our future, but we’ll provide a cleaner product,” said Karen Young, senior fellow at the Middle East Institute in Washington D.C. The UAE “wants to see itself as different and forward-looking within the region.”

In mapping out a scenario for the world to reach net-zero, the International Energy Agency still sees the planet consuming as much as 24 million barrels of oil a day by 2050 — down from around 100 million now. The idea is that by then any remaining emissions will be balanced out by capturing and burying carbon dioxide or planting trees.

The UAE is a member of the Organization of the Petroleum Exporting Countries, which has a more bullish outlook for the future of oil. The cartel thinks fossil-fuel demand will only plateau in the 2040s under a business-as-usual scenario. International oil companies such as BP plc and TotalEnergies SE forecast that consumption has already peaked or will do so within a decade.

“A net-zero goal for the entire economy is a major step forward,” said Randolph Bell, senior director at the Atlantic Council. “It will put additional pressure on Saudi Arabia to do so.” 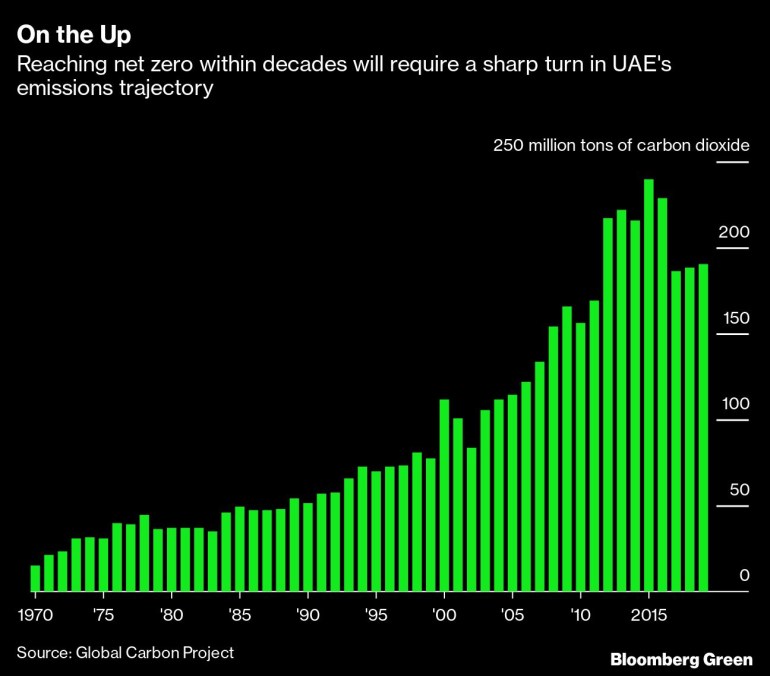 The UAE has already taken steps to build its green credentials. Abu Dhabi is home to the International Renewable Energy Agency headquarters, and the city’s $240 billion sovereign wealth fund Mubadala has invested heavily in its renewable-energy arm Masdar. Adnoc has started test shipments of blue hydrogen, a fuel seen as crucial to the energy transition.

The decision could bolster the UAE’s bid to host COP28. The only other country in contention to host the 2023 climate talks is South Korea, which already has a net-zero goal. Still, the move will remain a largely symbolic one until policy makers announce short-term measure that show how the UAE’s carbon-neutrality target can be met.

“For years, Gulf countries kind of ignored climate concerns and pretended that they weren’t realistic or were decades off,” said Ben Cahill, senior fellow at the Center for Strategic and International Studies. “There’s been a sea-change in the approach, and the UAE’s net-zero goal is a big symbol of it.”