China’s property industry has suffered its first default on a dollar bond since China Evergrande Group sank deeper into crisis in recent weeks, fueling investor concerns over other highly leveraged borrowers and about global contagion.

Creditors are now scanning debt repayment calendars as they try to suss out where the next flashpoints across the increasingly strained property industry may be.

The stumble stirred broader angst in volatile markets during a week of public holidays in China and amid uncertainty about Evergrande, one of the country’s largest developers and the biggest issuer of junk bonds in Asia. The average price of Chinese high-yield dollar notes wound up dropping 1.3 cents Tuesday, the worst tumble since July, according to a Bloomberg index. Developer shares slid, with Sunac China Holdings Ltd. and China Aoyuan Group Ltd. falling at least 10% Tuesday. 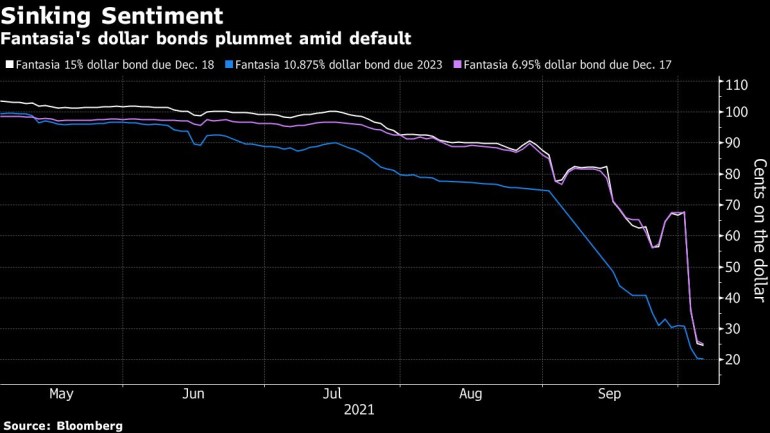 While Fantasia itself poses fewer risks to broader markets than Evergrande due to its smaller size–it ranked 60th in a list of contracted sales in the first quarter vs 3rd for Evergrande–the builder’s saga has flagged several risks that are increasingly weighing on investors’ minds.

One key concern is opaque debt in the sector, flagged in recent days when people familiar said that a widely unknown dollar note with an official due date of Oct. 3 issued by an entity called Jumbo Fortune Enterprises is guaranteed by Evergrande. In Fantasia’s case, the company had said just several weeks before defaulting that its operating performance was good, it had sufficient working capital and no liquidity issue. It stirred unease about hard-to-quantify obligations last week when it refuted a report that money for a privately placed bond hadn’t been transferred.

That private placement bond was “guaranteed by the company, but it does not appear to have been disclosed in the company’s financial reports,” though the developer has said that it prepared funds for a remaining $50 million of the securities due in early October, Fitch Ratings said in a report on Oct. 4. “We believe the existence of these bonds means that the company’s liquidity situation could be tighter than we previously expected.”

The rapid reversal was reflected in the credit market. Price indications on the dollar bond that defaulted this week were as high as 98 cents just last week. In international debt markets, it’s rare for notes to be indicated that close to par when they’re on the brink of payment failure. Fantasia’s other securities due in December and further down the line had already been registering distress.

One date in investors’ focus is Oct. 15, when Beijing-based Xinyuan Real Estate Co. must repay a $229 million outstanding on a dollar bond. Fitch slashed the company’s rating by one notch to CCC last month, citing “heightened refinancing risk” on the firm’s upcoming maturity in October.

Here’s a rundown on the rating moves made late Tuesday in Asia on Fantasia:

There was no immediate reply from Fantasia Wednesday on request for comment on its debt payment plans.