By Saket Sundria and Rajesh Kumar Singh and Debjit ChakrabortyBloomberg

India is grappling with an escalating crisis as stockpiles of coal, the fuel used to generate about 70% of the nation’s electricity, dwindle to the lowest in years just as power demand is set to surge.

Coal-fired power stations have an average of four days’ worth of stock of the fuel, according to the latest data, and more than half the plants are already on alert for outages. Power Minister Raj Kumar Singh has warned that the nation could be handling a supply squeeze for as long as six months.

Power shortages are already emerging, and the gap between available electricity supply and peak demand widened to more than 4 gigawatts on Monday, according to government data from power ministry. 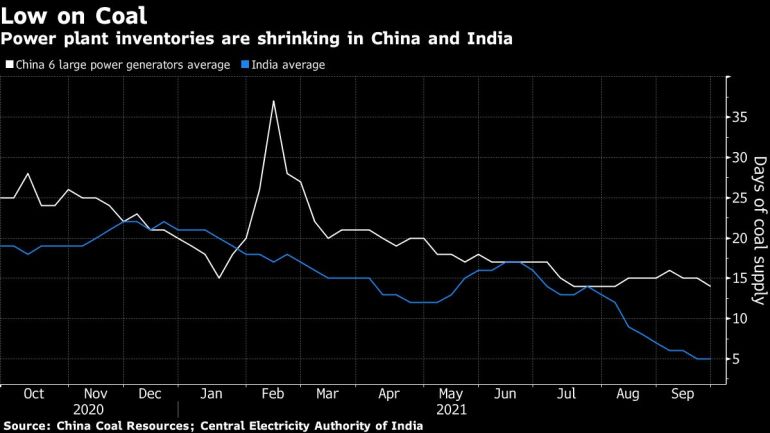 While shortages of coal in China, and that nation’s power crunch, have commanded most attention, it’s India that’s facing a potentially worsening scenario.

Industrial and domestic consumption usually hits peak levels as India enters a festival season from later in October and that could risk stalling a rebound in Asia’s third-biggest economy, which has been recovering from an unprecedented 7.3% contraction in the fiscal year ended in March.

Here are some potential next steps and constraints in India’s crisis:

State-run Coal India Ltd., the world’s top producer of the fuel, is seeking to increase daily coal supply to 1.9 million tons by mid-October from about 1.7 million tons currently, an increase that would go a long way to help ease the deficit. Deliveries to power plants are currently short by between 60,000 and 80,000 tons a day, according to Anil Kumar Jain, India’s coal secretary.

Coal production has been hit by severe flooding in India’s eastern and central states during the typical monsoon season, with mines and key logistics routes impacted. Any recovery will hinge on the weather — rains need to stop to allow mines to ramp up operations and for coal trucks to resume deliveries.

On Tuesday the government said it will allow companies that have been allotted coal and lignite mines for their own use to sell 50% of their annual output in a bid to ease shortages.

While coal stockpiles at power plants are perilously low, it remains unlikely the operations will completely run out of fuel. Government ministries and industry are working to closely monitor stocks, and could move again to divert supplies away from industrial users — like aluminum and cement makers — to prioritize power generation. That’d leave those industries faced with their own dilemma: curb output, or pay high prices for imported coal.

Rationing domestic power supplies, especially in rural and semi-urban areas, may emerge as one of India’s easiest solutions — though it’d pose other challenges for Prime Minister Narendra Modi.

Indian power distributors do typically cut supplies to certain areas on a rotational basis when generation is lower than demand, and an extension of load-shedding would likely be considered if power plants take any further hits.

However, doing so would risk jeopardizing the country’s fragile economic recovery and Modi’s government is already facing criticism for failing to generate enough new jobs.

Soaring power prices could potentially make it viable for some coastal plants to use high-cost imported coal, easing some of the burden on domestic miners.

The country meets around three-quarters of power demand with locally-produced coal, and much of the rest is imported from countries including Indonesia, South Africa and Australia.

Spot prices of power sold through the Indian Energy Exchange Ltd. jumped more than 63% year-on-year in September to average 4.4 rupees ($0.06) a kilowatt hour and were as high as 13.95 rupees on Wednesday, according to official data. That means some plants likely could now look to snap up prompt cargoes of seaborne coal, even with prices of the commodity at a record. 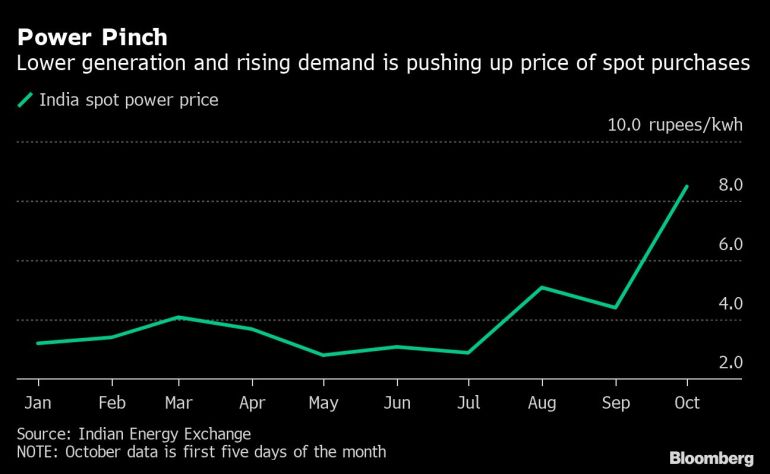 New guidelines are being drafted to allow generation companies to sell surplus electricity on the exchanges, in part to spur idled plants back into action. Two giant plants in Gujarat state owned by Tata Power Co. and Adani Power Ltd. are among those that have been mothballed as a result of issues including high imported coal prices.

The same monsoon rains that have flooded coal mines are likely to boost hydro-power generation.

Large hydro-electric projects on dams are India’s major electricity source after coal and the sector performs at its peak around the rainy season which typically extends from June to October.

Generation from the projects accounted for about 14% of India’s total during the six months through Sept. 30, and that share could increase if the plants can operate at higher utilization rates. Recent data shows hydro-power generation is above target in a sign that companies are beginning to ramp up output.

There could be a larger role for natural gas to play, even with global prices currently surging. India has almost 25 gigawatts of gas-based generation capacity, though nearly 80% of that capacity remains unused because of high prices of the fuel.

However, in a desperate situation the gas-powered fleet could help prevent any widespread power outages. State-run generator NTPC Ltd., for example, has idled capacity that can be fired up in around 30 minutes if needed and is connected to a gas grid.

Any switch to oil products like fuel oil and diesel could be limited due to pollution curbs and prohibitively high prices. As it stands, the lack of large oil-fired plants directly connected to the grid means gas-to-fuel swaps are unlikely to take place on a grand scale.

Some commercial establishments, including hospitals and malls, as well as small industries use diesel-based generators to ensure uninterrupted power supply in case of outages. But record high diesel prices in the country will prevent their widespread use.