The price of oil jumped in New York on Monday to its highest level since 2014 after the Organization of the Petroleum Exporting Countries (OPEC) and its allies, a grouping known as OPEC+, agreed to stick to its existing plan to add 400,000 barrels per day (bpd) of oil to the global market in November.

Monday’s decision comes amid a worsening global energy crunch and calls on the oil cartel to further loosen the taps to cool red-hot prices. More oil flooding the market means cooler prices while less oil coupled with growing demand can cause prices to spike.

United States West Texas Intermediate (WTI) crude futures rose past $78, their highest since 2014 after gaining for the past six weeks. WTI settled up 2.27 percent at $77.60.

Demand for crude will likely spike in the coming months as winter approaches in the Northern Hemisphere and the market struggles to meet demand.

A constrained supply environment and a demand spike as countries come out of COVID-19 lockdowns have set the stage for a global energy crisis.

“Absent a significant change of course by OPEC+ to its current production plan, which we now know there won’t be, the current climb in prices is likely to continue,” Reed Blakemore, deputy director of the Atlantic Council’s Global Energy Center, told Al Jazeera. 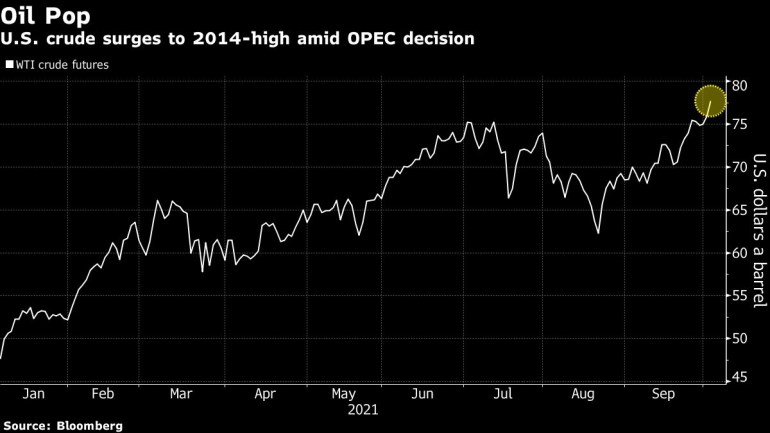 OPEC+ faced pressure from crude consumers such as the US to loosen the taps some more and help cool prices. The price of crude has spiked 50 percent in 2021, threatening to derail the recovery from the coronavirus pandemic.

OPEC+ is the most impactful supply-side market participant, according to Rystad Energy, which forecasts that there is still about 10 million bpd of spare oil production capacity worldwide. OPEC+ has the lever on 9.2 million bpd.

OPEC+ agreed in July to boost output by 400,000 bpd each month until next April to phase out 5.8 million bpd of existing cuts. The cartel, led by Saudi Arabia and Russia, had agreed to take barrels off the market after COVID-19 shutdowns essentially wiped out demand for crude in 2020.

“It’s important to remember that today’s meeting was related to November production levels, so any decision today would likely have been more of a signal rather than changing the fundamentals, which are currently driving a rally across the broader energy sector,” Blakemore explained.

A lot can happen over the course of a month, however. OPEC+ is set to meet again on November 3.

“If we get to the next meeting and prices are still climbing, then there will be significantly more pressure for OPEC+ to intervene,” Blakemore said. “Especially if tightness in gas markets increases and the current boost to oil demand as a result of fuel switching proves to be a much more of a medium-term trend.”