The United States economy grew at a slower pace in the three months ending September, as a wave of COVID-19 cases, supply chain bottlenecks, surging inflation and ebbing federal financial lifelines downshifted the pace of the nation’s economic recovery.

US gross domestic product (GDP) which measures the value of goods and services produced by the economy, grew 2 percent in the third quarter from the same period a year ago, the US Department of Commerce said on Thursday.

“Overall, this is a big disappointment given that the consensus expectation at the start of the quarter in July was for a 7.0% gain and even our own bearish 3.5% forecast proved to be too optimistic,” said Capital Economics chief US economist Paul Ashworth in a note to clients.

A sharp slowdown in consumer spending was behind the disappointing growth figures. Personal consumption grew a scant 1.6 percent on an annualised basis in the third quarter, compared with 12 percent in the second quarter.

Myriad factors are taking the wind out of the sails of US consumers, whose spending accounts for roughly two-thirds of the nation’s economic growth.

A wave of COVID-19 infections driven by the highly contagious Delta variant swept through parts of the country in the three months ending in September. Gummed up supply chains and continuing shortages of raw materials drove prices higher for businesses, many of which in turn passed them on to consumers. And as prices climbed, many consumers had less money to spend, thanks to waning government stimulus.

As economies around the world cast off COVID restrictions, supplies of many raw materials cannot keep up with demand. Those shortages are on display at the nation’s ports where backups are rife and within the latest GDP data.

A global shortage of semiconductors for instance has weighed heavily on US auto manufacturing. That, in turn, showed up in the data under the consumption of durable goods – aka goods designed to last three years or more.

“That drop was entirely due to a massive 70% annualised slump in motor vehicle consumption,” said Ashworth, who added that he does not expect a “dramatic rebound in consumption over the next couple of quarters” due to the continuing chip shortage.

Shortages of raw materials and labour have led to higher input prices for businesses, many of which are passing those increases on to consumers.

While some purchases can be put off, essentials like food, energy and shelter cannot be delayed. Rents are on the rise, thanks to a hot US housing market driven by low-interest rates. Food prices are increasing due to higher input costs and energy prices are climbing, thanks to a global energy crunch.

That could weigh heavily on US consumers as winter sets in, with retail prices for natural gas, heating oil, propane and electricity expected to hit multiyear highs.

Low-income households will feel the pain most acutely because inflation takes a bigger bite out of their total income.

But workers currently hold the upper hand in the US labour market. A record 4.3 million Americans quit their jobs in August and the number of job openings – 10.4 million that month – is hovering near all-time highs.

Some 51 percent of small business owners said they had job openings they could not fill in September, according to the National Federal of Independent Businesses.

That has translated into fatter paychecks for workers. Average hourly wages in September were up 4.6 percent from the same period a year ago. But that did not keep pace with inflation. Consumer prices that same month increased 5.4 percent on an annualised basis. 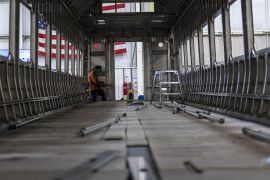 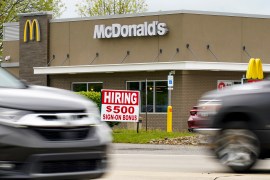 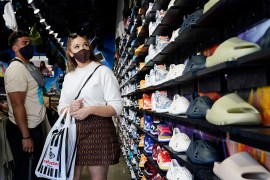 Pain in the wallet: US inflation hits another 13-year high

Soaring food and shelter costs accounted for more than half of the gain in September’s US consumer price index. 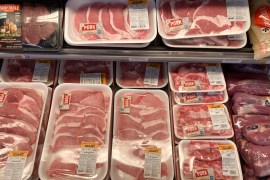 US wholesale inflation surges to another record

US producer prices surged 8.6 percent in September from the same period a year ago – the biggest jump on record.