President Vladimir Putin told Gazprom PJSC to turn to refilling European gas-storage facilities next month, signaling that long-awaited additional Russian supplies could be on the way.

The move will “create a more favorable situation on the European energy market,” Putin said at a meeting broadcast on state television Wednesday.

He ordered the state-controlled energy giant to focus on filling underground storage in Germany and Austria starting Nov. 8, once it’s completed the process at home. Gazprom Chief Executive Officer Alexey Miller, speaking to the president via video link, said the domestic re-injection campaign would be extended a week longer than the original Nov. 1 conclusion.

Russia’s focus on rebuilding domestic gas inventories, combined with low storage rates at Gazprom sites in the European Union, has become a major concern for the continent’s market, which is struggling with an energy squeeze and sky-high prices.

European inventories on the whole are at the lowest seasonal level in almost a decade. 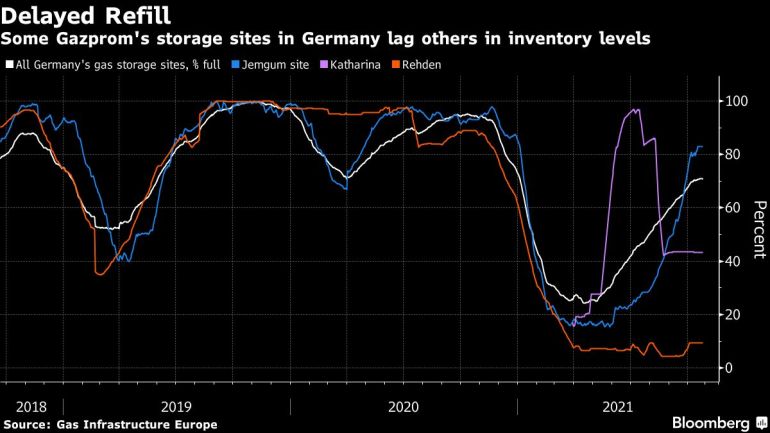 Putin’s first verbal intervention into the market earlier this month eased the gas rally but prices have recovered slightly since. Transit capacities that Gazprom has booked for November don’t yet promise any significant boost in deliveries to Europe. The company has said it’s meeting all contractual obligations, while some EU officials have accused the company of withholding fuel to accelerate approval of its controversial Nord Stream 2 pipeline.

All gas-storage sites in Europe’s biggest market, Germany, where Gazprom has several facilities, are about 71% full now, according to data from Gas Infrastructure Europe.

The situation with facilities owned and co-owned by the Russian exporter varies – from 83% at Jemgum to 9.5% at Rehden. Gazprom has used some volumes it stored in the EU in August to compensate for reduced shipments after a fire at a Siberian processing plant.

In Russia, Gazprom plans to stockpile a record 72.6 billion cubic meters for the upcoming winter. The plan was to complete this task by Nov. 1, but the gas producer will continue rebuilding its Russian inventories through Nov. 7 as planned virus lockdowns will dampen fuel consumption, Miller said.