By Alice Huang and Olivia TamBloomberg

A Chinese developer of real estate projects that use green technologies has become the latest builder to default, adding to the record for offshore bonds from the nation’s borrowers.

Modern Land China Co., which is based in Beijing and builds energy-saving homes throughout the nation, didn’t repay either the principal or interest on a $250 million bond due Monday, according to a filing Tuesday morning. The company is working with its legal counsel Sidley Austin and expects to engage independent financial advisers soon, the filing said.

Chinese borrowers have defaulted on about $9 billion of offshore bonds this year, with the real estate industry accounting for one-third of that amount. That’s come as authorities clamp down on excessive leverage in the real estate sector amid a crisis at China Evergrande Group that has left many investors around the world on edge. 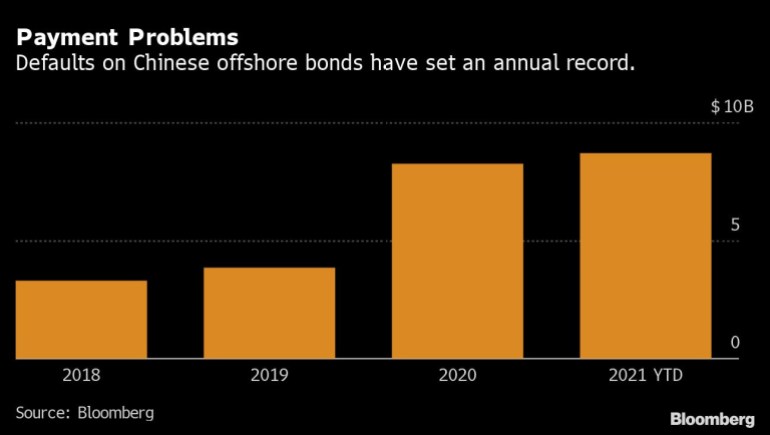 Multiple developers have defaulted this month, though Evergrande made a coupon payment last week before a grace period expired. Still, Evergrande’s creditors are bracing for an eventual debt restructuring that could rank among the largest ever in China.

Policy makers are trying to keep such issues from snowballing. Chinese authorities told billionaire Hui Ka Yan to use his personal wealth to alleviate Evergrande’s deepening debt crisis, according to people familiar with the matter.

Separately, China’s National Development and Reform Commission called on companies to make active preparations for offshore bond repayment at a symposium with some companies in key industries Tuesday.

Credit-rating downgrades of Chinese developers have accelerated further in October, hitting a record high for a second straight month. There were 44 cuts in the sector by Moody’s Investors Service, S&P Global Ratings and Fitch Ratings as of Oct. 21, after 34 downgrades for all of September, according to Bloomberg-compiled data. 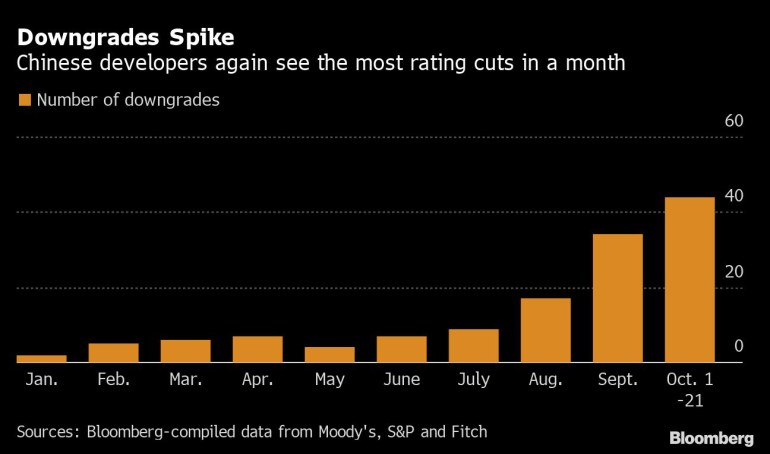 Also hindering capital-raising is the surge in yields on Chinese junk-rated debt, recently reaching their highest in a decade at 20% and resulting in the country’s developers making up nearly half the world’s distressed dollar bonds. Still, a media representative for Ronshine China Holdings Ltd. told Bloomberg that the developer paid the $30.2 million of interest due Monday on a dollar bond. Peer Agile Group Holdings Ltd. said it has sufficient funds to meet upcoming debt maturities.