By Lynn Thomasson and Bailey LipschultzBloomberg

Shares of Digital World Acquisition Corp. have skyrocketed 1,225% since an announcement that the blank-check company will merge with Trump Media & Technology Group. The stock nearly tripled to $131.90 when the U.S. stock market opened Friday morning before triggering a halt for volatility after it quadrupled on Thursday. 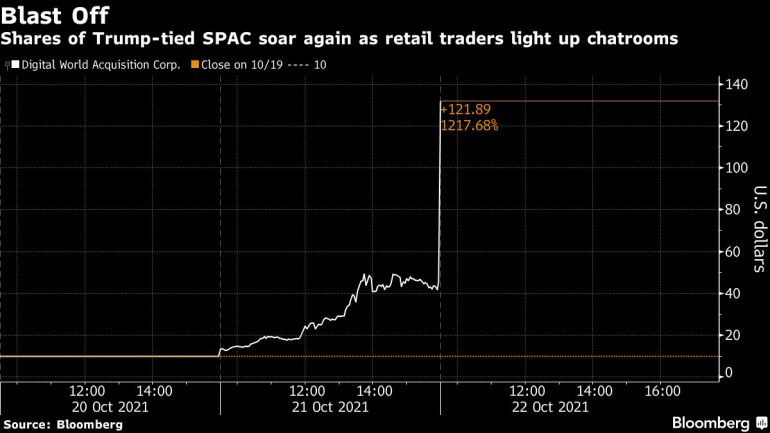 Trump’s fans on social media have pumped the stock on Reddit and StockTwits, fueling heavy trading. On Thursday, the special-purpose acquisition company was the top purchase on Fidelity’s platform with about 55,000 buy orders from customers. That demand carried on Friday with more than 20,000 buy orders being registered on Fidelity’s platform, double the buying seen in the second-most actively traded stock Phunware Inc., a newly crowned MEME stock.

The former president’s new enterprise will be in operation by the first quarter of 2022, according to a news release. It plans to start a social media company called Truth Social. The moves, if all goes according to plan, would occur well ahead of the 2022 midterm elections.

The stock was the most actively traded company with a market value above $500 million. About 35 million shares had changed hands by 9:30 a.m. in New York, according to Bloomberg data.