The pension fund for Houston’s firefighters is tip-toeing into cryptocurrency investing.

The Houston Firefighters’ Relief and Retirement Fund, which has $5.5 billion of assets, said it invested $25 million in Bitcoin and Ether through NYDIG, a Bitcoin-focused subsidiary of asset manager Stone Ridge.

“I see this as another tool to manage my risk,” said Ajit Singh, the chief investment officer for fund. “It has a positive expected return and it manages my risk. It has a low correlation to every other asset class.”

State and local government pension funds are a powerful force in investing, overseeing more than $5.5 trillion in assets, according to the National Association of State Retirement Administrators. Though as stewards of taxpayer funds they’ve been slow to pile into the speculative mania around cryptocurrencies, Houston’s step isn’t unprecedented. Two Virginia pension funds that first bought digital assets two years ago have recently said they are planning to expand their investments by another $50 million. 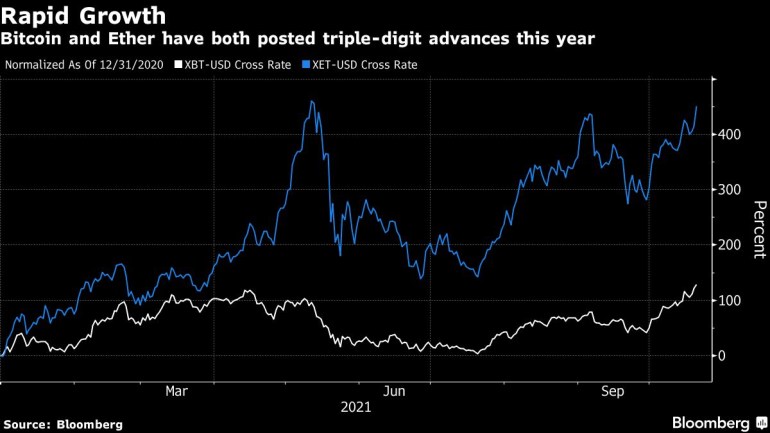 With Bitcoin hitting new highs Wednesday and more than doubling since the beginning of the year, some institutional investors are giving crypto another look. This week’s rally, which pushed Bitcoin above $66,000, was spurred by optimism that the launch of the first futures exchange-traded fund for the currency in the U.S. would lead to more mainstream acceptance.

Singh said he preferred direct tokens, rather than taking on risk associated with futures-related investments.

“We didn’t want to get the synthetic exposure,” he said. “We decided to go directly to the token. As more and more institutional adoptions happen, there will be more and more dynamics that develop for supply and demand. And having physical assets — actual tokens — gives us in the future the possibility of income generation potential.”

The Houston fund handles retirement benefits for more than 6,600 active and retired firefighters and family beneficiaries. Since 2004, active firefighters have contributed 9% of their salary to the fund, with the city of Houston contributing at least twice that amount.

Singh is confident that the crypto investment will pay off.

“We have been studying this as an asset class to add to our investment portfolio for quite some time; we were watching it, we were analyzing it,” he said. “It became an asset class we could not ignore anymore.”