Production at U.S. factories fell by the most in seven months in September, in part reflecting a sharp pullback in the manufacturing of motor vehicles as well as broader backlogged supply chains and materials shortages. 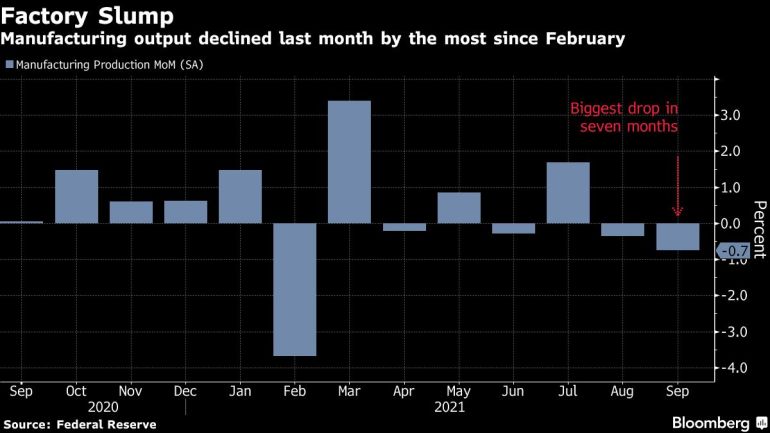 The median estimate in a Bloomberg survey of economists called for a 0.1% monthly increase in both factory production and industrial output. Stocks fell and Treasury yields were up after market open.

Resilient demand among firms and consumers has kept production elevated, but it’s also contributed to order backlogs as manufacturers struggle to source materials and skilled labor. The weaker-than-expected September print indicates that producers continue to be held back by snarled supply chains.

The report showed motor vehicles and parts output fell 7.2% last month, the sharpest drop since April, after a 3.2% decrease in August, as a global shortage of semiconductors continues to weigh on production.

Automakers including Toyota Motor Corp. have slashed production outlooks for the coming months, citing the parts shortage as a limiting factor. S&P Global Ratings also lowered its U.S. auto sales forecast for this year and expects a “bumpy road” in 2022.

Manufacturing job openings are near a record high, and for the products factories can source, prices have soared. Recent data from the Labor Department showed a price gauge of processed goods for intermediate demand, which include materials and components used in manufacturing and construction, are up almost 24% from 12 months ago.