India’s economy is set for its biggest annual contraction in records going back to 1952 as the rapid spread of coronavirus cases and measures to contain them hurt businesses and households.

Gross domestic product will shrink 7.7% in the financial year ending March 2021, the statistics ministry said in its first advance estimate published on Thursday. That’s steeper than a 7.5% drop forecast by the Reserve Bank of India, as well as economists surveyed by Bloomberg. 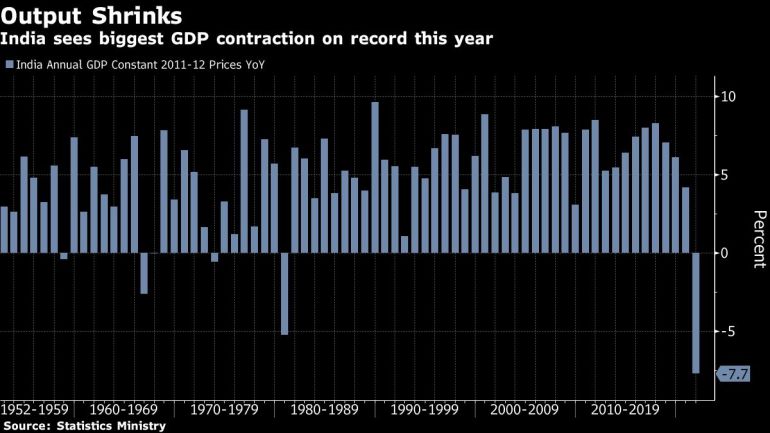 The estimates may undergo sharp revisions due to disruptions caused by steps to contain the pandemic, said the statistics office, which had suspended data collection coinciding with a nationwide lockdown.

The rupee declined 0.3% at close in Mumbai on Thursday before the data was published, while sovereign bonds were little changed.

Despite one of the strictest coronavirus lockdowns, India is now home to the world’s second-highest virus infections — which at more than 10.4 million has kept the government from fully reopening the economy. The contraction in the nation’s GDP will also be the first since 1980, when the economy shrank 5.2%, and is set to be the worst slump in Asia after Philippines’ estimated 8.5%-9.5% drop.

But unlike the Southeast Asian economy, which is expected to extend the decline for a second straight year in 2021, economists forecast India to bounce back strongly in the next financial year starting April 1, helped by a string of fiscal and monetary steps. For now, the country is in a recession after two straight quarters of contraction in GDP.

“While weak global growth and a sudden volteface on domestic pandemic control are key short term risks, over the medium term, easier financial conditions, stronger global demand and accelerated vaccinations could lead to an economic upcycle in 2021,” Sonal Varma and Aurodeep Nandi, economists at Nomura Holdings Inc. in Singapore, wrote before the data was released.

India this month granted emergency approval for the vaccine developed by AstraZeneca Plc and the University of Oxford, paving the way to begin inoculations of its population of about 1.3 billion.

Calls are growing for the innoculation drive to be complemented by more support from fiscal and monetary policy makers. While Finance Minister Nirmala Sitharaman is due to present the government’s annual budget on Feb. 1, the RBI’s Monetary Policy Committee will decide on interest rates later that week.