Bitcoin traded at $33,365 in Asia on Monday, after soaring to a record high of $34,800 on Sunday as investors continue to bet the digital currency is on its way to becoming a mainstream asset.

The latest milestone for the world’s most popular cryptocurrency came less than three weeks after it crossed $20,000 for the first time, on December 16, and Bitcoin has now surged some 800 percent since mid-March.

With Bitcoin’s supply capped at 21 million, some see it as a hedge against the risk of inflation as governments and central banks turn on the stimulus taps in response to the COVID-19 pandemic. Some also view it as a safe-haven play during the COVID-19 pandemic, akin to gold.

“Some of it is reflecting the fear of a weaker dollar,” Bank of Singapore currency analyst Moh Siong Sim said of the most recent rally.

“It seems like people are preferring Bitcoin as an expression of concern over currency debasement, relative to gold.”

Bitcoin’s advance also reflects increasing expectations it will become a mainstream payment method, with PayPal opening its network to cryptocurrencies.

The potential for quick gains has also attracted demand from larger US investors, as well as from traders who normally stick to equities. 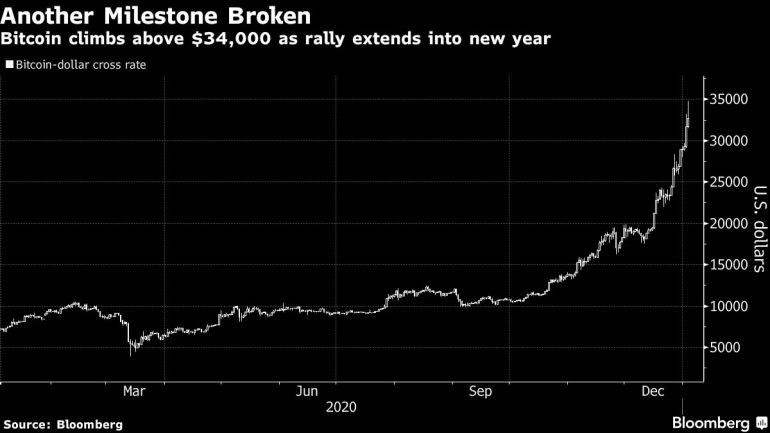 The currency “will be on the road to $50,000 probably in the first quarter of 2021,” said Antoni Trenchev, managing partner and co-founder of Nexo in London, which bills itself as the world’s biggest crypto lender, Bloomberg reported. Institutional investors returning to their desks this week will likely boost prices further after retail buying over the holidays, he said.

Bitcoin trades on numerous exchanges, one of the largest of which is Coinbase, itself preparing to go public to become the first major US cryptocurrency exchange to list on Wall Street.

Multiple competitor cryptocurrencies use similar blockchain, or electronic ledger, technology. Ethereum, the second biggest, shot to a record $1,014 on Sunday.