Renewables overtook fossil fuels as the European Union’s main source of electricity for the first time in 2020 as new projects came online and coal power shrank, a report shows.

Renewable sources such as wind and solar generated 38 percent of the 27-member bloc’s electricity in 2020, with fossil fuels such as coal and gas contributing 37 percent, the report published on Monday by think-tanks Ember and Agora Energiewende showed.

Denmark achieved the highest proportion of wind and solar power, which contributed 61 percent of its electricity needs in 2020. Ireland achieved 35 percent and Germany 33 percent.

Countries with the lowest share of renewables, below 5 percent, were Slovakia and the Czech Republic, the data showed.

Curbs on homes and businesses designed to limit the spread of the coronavirus led to a 4-percent drop in overall electricity demand in the EU last year, but the effects were felt more keenly by fossil fuel producers, the report showed.

“Coal generation fell in almost every country, continuing coal’s collapse that was well in place before COVID-19,” the report said.

Renewables on the rise

Many European countries are phasing out polluting coal-fired power plants to meet emission-reduction targets, but low electricity prices amid the pandemic lockdowns also made some coal plants unprofitable to run compared with cheaper renewable generation.

“Renewables will keep rising, because we keep installing more and more. The jury’s out as to whether fossil fuels will rebound but if they do rebound it’s not expected to be by a lot,” Dave Jones, Ember’s senior electricity analyst said.

Some change is taking place within fossil fuel companies themselves.

In recent months, oil giant BP has slashed its team of geologists, engineers and scientists to less than 100 – from a peak of more than 700 a few years ago – as part of a climate change-driven overhaul triggered last year by CEO Bernard Looney, the Reuters news agency reported, citing unnamed sources. The move is part of BP’s rapid shift away from oil and gas, which will nevertheless be its main source of cash to finance a switch to renewables for at least the next 10 years.

EU leaders committed last month to cut the bloc’s 2030 greenhouse emissions by 55 percent compared with 1990 levels and affirmed their pledge to turn Europe into the world’s first climate-neutral continent by 2050. Acknowledging the risk that the bloc’s ever-stricter environmental regulations could force polluting activities to relocate elsewhere in the world, policymakers are eager to eliminate “carbon leakage” by forcing the rest of the globe to fall in line with the Paris Agreement against climate change. 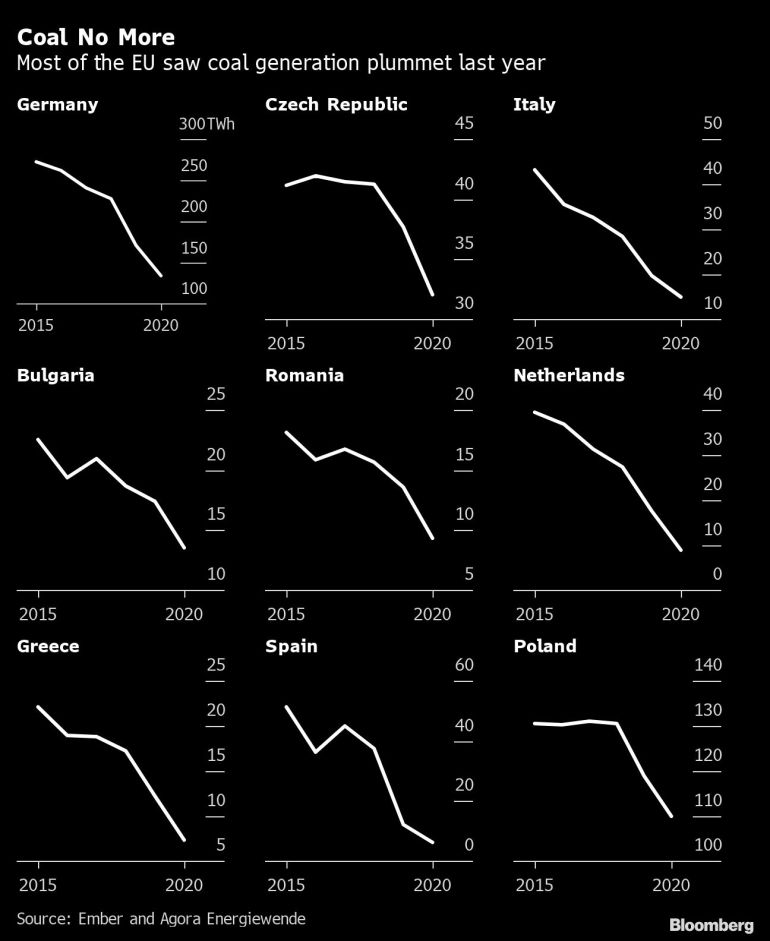 The EU’s executive arm is drafting a law, to be unveiled by June, that would start penalising imports of certain goods from countries with weak pollution rules, thereby helping to protect the competitiveness of local producers abiding by stricter standards.

The moves come as the issuance of global green bonds reached a record high of $269.5bn at the end of last year and could reach $400-$450bn this year, a report by the Climate Bonds Initiative (CBI) showed on Monday. CBI is a London-based non-profit which promotes investment in the low-carbon economy.

Green bonds, which started in 2007, are a growing category of fixed-income securities that raise capital for projects with environmental benefits, such as renewable energy or low-carbon transport. While currently a fraction of the overall debt market, they are attracting attention because the need to meet emissions-reduction targets will require trillions of dollars of capital from public and private sectors.

Issuance of such bonds is likely to get a further boost this year driven by United States President Joe Biden’s decision to restore the US as a member of the Paris climate accord which seeks to limit global temperature increases to two degrees Celsius (3.6 degrees Fahrenheit).

Another push may come from the British government. In a letter to the governor of the Bank of England (BoE), a group of members of parliament said it should stop buying bonds from businesses whose activities accelerate global warming, and instead, it should align its corporate bond-purchasing programme “with Paris Agreement goals as a matter of urgency”, Reuters reported, quoting a letter that Philip Dunne, chairman of the House of Commons’ Environmental Audit Committee, wrote to BoE Governor Andrew Bailey.

In a further nod to the effect of climate change on economies and lives, British Prime Minister Boris Johnson will announce plans on Monday for the UK to team up with Egypt, Bangladesh, Malawi, Saint Lucia and the Netherlands to help communities around the world that are threatened by climate change to adapt and build resilience.