China’s successful control of Covid-19 made it the only major economy to have grown last year, but a wide income inequality gap and still weak consumer spending reflects an unbalanced recovery.

Here’s a deeper look at some of the underlying data published alongside the gross domestic product report this week:

Official figures released on Monday which showed that the economy’s growth rate surpassed pre-pandemic levels in the last quarter also revealed that the richest 20% of Chinese had an average disposable income of more than 80,000 yuan ($12,000) last year, 10.2 times what the poorest 20% earn.

The multiple in the U.S. is about 8.4 and closer to 5 in Western European countries such as Germany and France, according to data from the Organisation for Economic Co-operation and Development. By this measure, China’s inequality levels are comparable with Mexico, where the top 20% earn 10.4 times the bottom 20%. 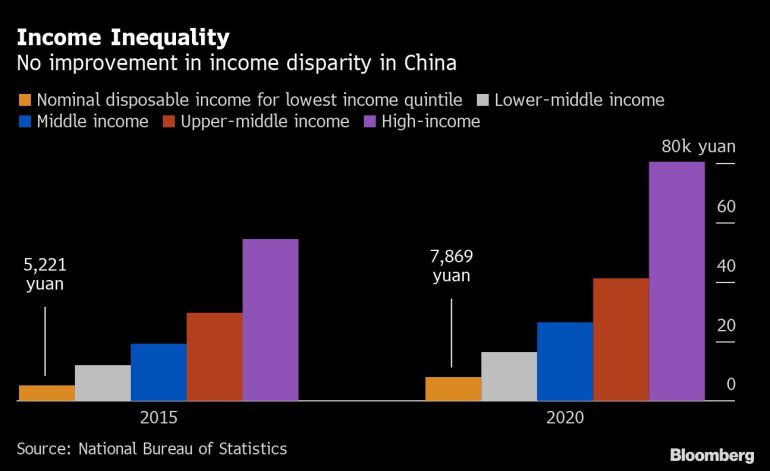 President Xi Jinping has flagged the country’s unequal income distribution as a threat to its future growth, with officials considering more redistributive policies to encourage household spending. The latest data showed little progress has been made so far, with the income gap remaining largely stable since 2015.

The full-year 2020 data also showed that even though China’s suppression of the virus allowed normal economic activities to resume by the second half of the year, growth in household spending has yet to return to pre-pandemic levels.

China’s per-capita consumption, after adjusting for inflation, dropped 4% in 2020. That’s comparable with forecasts for U.S. personal consumption spending, which is projected to have fallen 3.8% in 2020, according to a Bloomberg survey.

Retail sales declined 3.9% in 2020 from the previous year, a steeper decline than in developed economies such as the U.S., where government payments to workers stuck at home and unemployed supported spending on consumer goods.

In common with other economies, China’s spending on services suffered more than spending on goods due to closures and fear of the virus, with an almost 17% drop in spending at restaurants last year. 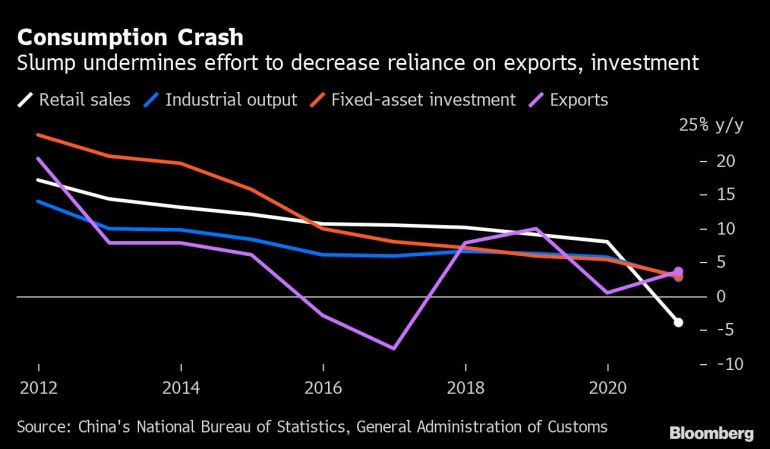 However, China’s effective suppression of Covid-19 meant almost all consumer services were able to safely re-open by the second half of the year. After falling in the first three quarters, spending in restaurants and accommodation such as hotels increased 2.7% in the final three months of 2020.

Millions of migrant workers lost their jobs early in 2020 as factories, shops and restaurants were shuttered to contain the virus. When lockdowns were lifted later in the spring, some chose to remain in their rural hometowns, with official data showing the number of migrant workers declining by 5.2 million in 2020 from 2019.

China offered relatively little direct support to households hit by job-losses in the first quarter, meaning many had to rely on savings that they are now trying to replenish.

“Right now, Chinese households still save three percentage points more of their income than pre-Covid,” according to Houze Song, a researcher on China’s economy at the Paulson Institute.

In contrast to consumption, China’s industrial economy hit new records in 2020. Crude steel output rose above 1 billion tons for the first time, and the production of rolled steel and aluminum also surged as investment in real-estate and infrastructure climbed. 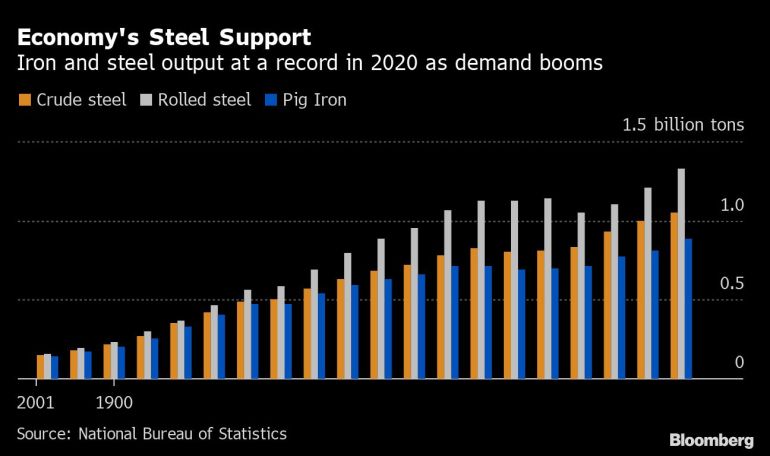 Overall service sector growth was 2.1% in 2020, lagging the expansion of GDP, while the industrial sector which includes manufacturing and construction grew 2.6%. There were some bright-spots for the services sector in 2020 according to a sectoral breakdown of growth released by the National Bureau of Statistics, with strong expansion in information technology and finance. 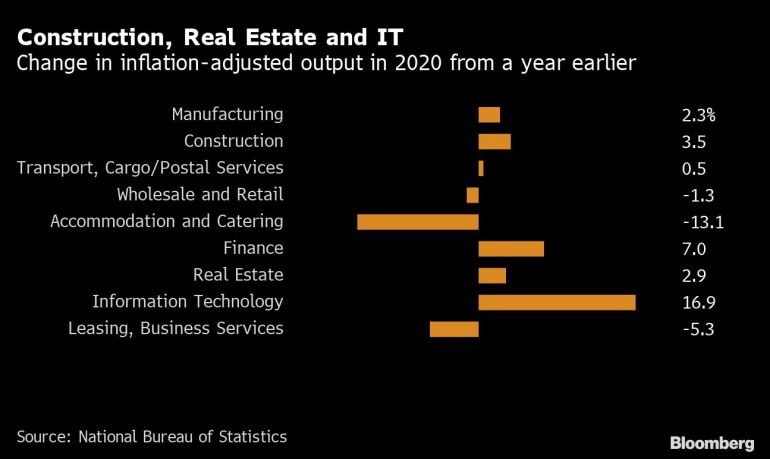 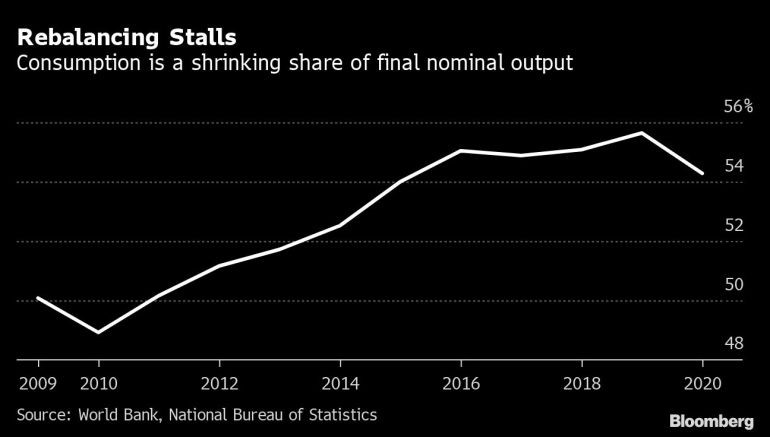 However, the decline was less dramatic than expected, with the share of final consumption in GDP down just 1.4% from 2019, according to Ning Jizhe, the head of China’s statistics bureau. That may be due to increased government spending on consumption goods and services, as Beijing loosened controls on government debt to encourage economic expansion.