Economic activity in the United States increased only modestly in recent weeks and a growing number of the Federal Reserve’s districts saw a drop in employment as a surge in coronavirus cases led to more shutdowns of businesses, the US central bank said on Wednesday.

In the Federal Reserve’s (commonly known as the Fed) latest Beige Book report, a collection of anecdotes from businesses across the country, Fed officials revealed how the pandemic’s imprint varied by region and industry as rising infections dampened the optimism promised by the arrival of effective coronavirus vaccines.

Indeed, the launch of the vaccine was a frequently cited source of optimism in many of the Fed’s 12 regional districts, with 10 mentions in the report, twice the number in the previous Beige Book that was released in early December.

“Although the prospect of COVID-19 vaccines has bolstered business optimism for 2021 growth, this has been tempered by concern over the recent virus resurgence and the implications for near-term business conditions,” the Fed noted in the report.

The report was the first since last May to report outright declines in activity in some of the Fed’s districts.

While contacts in most of the country reported economic gains, the New York and Philadelphia districts said activity had weakened and the Cleveland district reported a loss in momentum due to the rise in infections. The St Louis and Kansas City districts reported little change.

A majority of the Fed districts said employment had risen, though the pace was slow. More troubling was that “a growing number of Districts reported a drop in employment levels” since the previous Beige Book was compiled.

The manufacturing, construction and transportation industries continued to add jobs, but the report said “contacts in the leisure and hospitality sectors reported renewed employment cuts due to stricter containment measures”.

Adapting to a new environment

The US economy shed 140,000 jobs in December as the country faced a surge of COVID-19 infections, the first loss of jobs in eight months and a sign that the economic recovery could be losing momentum.

As difficult as the environment was for many consumer-driven businesses, the report also highlighted that some in that space were adapting to a rapidly changing COVID-19 operating environment.

In the Fed’s Boston district, for instance, one clothing retailer reported that store foot traffic remained down 30 percent from a year earlier, but year-over-year sales in November were up about 5 percent due to strong online buying and other factors.

“With modest increases in sales throughout 2020, this retailer had greater profits because of reduced store operating costs and smaller promotions than in recent years,” the report said.

Analysts and Fed officials also say there is reason to think the economy may rebound in the second half of 2021, bolstered by the release of coronavirus vaccines and a fresh round of pandemic-related government aid.

A $900bn relief package passed in late December should help to bolster the economy until the northern hemisphere spring and expectations are high the incoming administration of President-elect Joe Biden will ramp up the stimulus and intensify efforts to fight the virus.

Beyond boosting economic growth expectations this year, the vaccine’s launch may already be helping specific corners of the economy, given the specific cold storage needs required to keep the vaccines from spoiling. Some ethanol producers have been “helped by growing demand for byproducts such as carbon dioxide for dry ice,” the Fed’s Chicago district reported.

Fed officials have reiterated their promise to keep short-term interest rates low and to maintain the central bank’s asset purchases until the economy is on a more stable footing. The Fed’s next policy meeting is scheduled for January 26 and 27.

The Beige Book was prepared at the San Francisco Fed based on information collected on or before January 4, 2021. 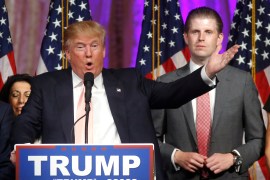 Eric Trump told AP on Tuesday that his father will leave the US presidency with a powerful brand backed by millions. 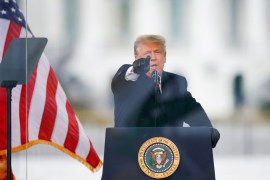 The US House is debating impeaching Trump for ‘incitement of insurrection’ after a pro-Trump mob stormed the US Capitol. 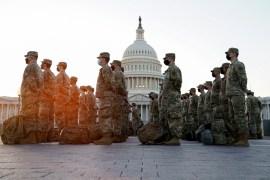 Washington, DC, is on high alert after the storming of the US Capitol and with a week left of Trump’s term. 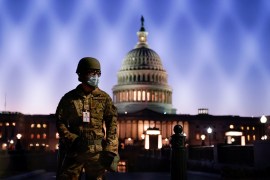 Airbnb will cancel reservations in DC during inauguration week

Airbnb said on Wednesday that it is cancelling reservations and barring new ones in DC area during inauguration week.