The German economy stagnated at the end of last year, probably avoiding a double-dip recession that is engulfing the euro area.

The statistics office predicted that the country’s renewed pandemic lockdown won’t have the same severe impact as restrictions earlier in 2020. It estimates output remained flat in the fourth quarter, capping a year that saw an economic contraction of 5%.

The government ran a budget deficit of 4.8% of gross domestic product, the biggest since 1995. 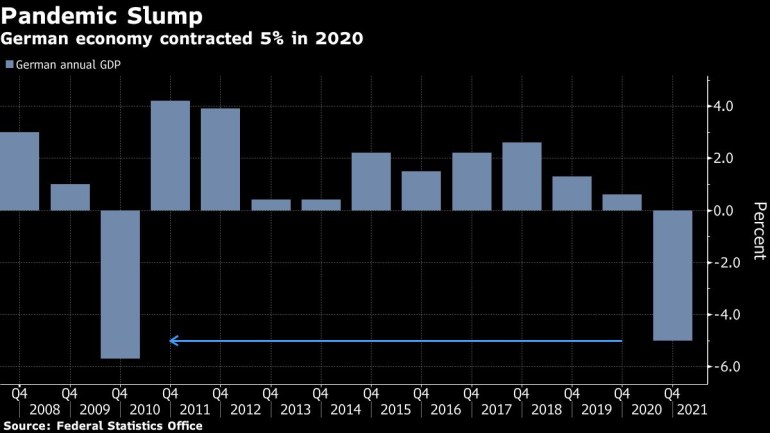 Germany is the first advanced economy to publish 2020 GDP figures, and it’s likely to have fared better than its major European peers. Economists predict France and Italy both posted declines of about 9% and U.K. gross domestic product may have shrunk more than 10%.

The pain is extending into 2021 after a new surge in infections forced governments to extend lockdowns. Still, Germany has so far proved relatively resilient, in part due to extensive government support and its sizable manufacturing sector.

“It will be decisive for economic developments what effects the second lockdown and tighter restrictions to fight the pandemic will have, as well as government support measures,” said Albert Braakmann, head of national accounts and prices at the statistics office.

The statistics office will publish official figures for the fourth quarter on Jan. 29.

Manufacturing has been a stronghold for Germany through the crisis as factories adapted more easily to health and safety restrictions than businesses that rely on face-to-face interactions. The sector makes up about a fifth of total output, and will likely help drive the recovery once global demand rebounds. 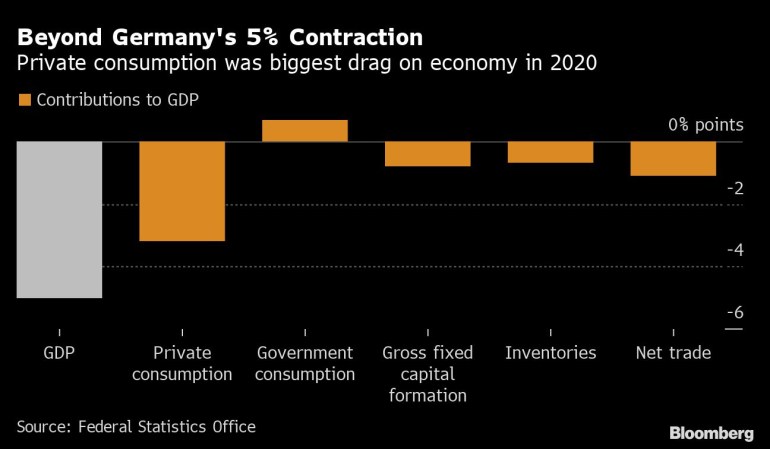 Restaurants, hotels and non-essential retailers will remain closed until at least the end of January. Chancellor Angela Merkel has sounded private warnings that another 10 weeks of lockdown might be necessary to curb a new variant of the coronavirus that risks driving up infections. A slow start to vaccination campaigns across the region is adding to uncertainty.

The Bundesbank remains optimistic though that Germany’s recovery will continue after an interruption in the winter half. With economic confidence picking up across the euro area, European Central Bank President Christine Lagarde also expressed confidence in a rebound for the currency bloc this year.

“We want the German economy to return to growth this year,” Economy Minister Peter Altmaier said at a news conference in Berlin after the GDP release. “Perhaps a bit less than originally hoped due to the new outbreak of the pandemic — but an upswing that can carry with it others in Europe and worldwide, and that can contribute to a positive development in the global economy.”