Asian shares paused near historic highs on Monday while United States Treasury yields were at a 10-month top as “trillions” in new US fiscal stimulus plans were set to be unveiled this week, stoking the possibility of rising inflation.

Investors were keeping a wary eye on US politics as pressure grew to impeach President Donald Trump amid signs that a trial could be some time away.

MSCI’s broadest index of Asia-Pacific shares outside Japan dipped 0.2 percent, having surged 5 percent last week to record highs. Japan’s stock market was on holiday. It closed at a 30-year high on Friday.

“Asia has come through the second global crisis this millennium with its credentials,” said ANZ chief economist Richard Yetsenga. “Asia’s growth is stronger, with for the most part better demographics and debt levels, than advanced economies.”

A turnaround in fortunes between the semiconductor and energy sectors highlighted Asia’s success, given the region produced about 45 percent of the world’s semiconductors, Yetsenga said.

“For the first time, the global semiconductor sector’s market capitalisation has surpassed energy,” he said. “At the time of the last crisis, 12 years ago, the energy sector was more than five times larger.”

Longer-term US Treasury yields were at their highest since March after Friday’s weak jobs report fanned speculation of more US fiscal stimulus now that the Democrats will have control of the government.

President-elect Joe Biden is due to announce plans for “trillions” in new relief bills this week, much of which will be paid for by increased borrowing.

At the same time, the Federal Reserve is sounding content to put the onus of supporting the economy on fiscal policy with Vice Chair Richard Clarida saying there would be no change soon to the $120bn of debt the central bank is buying each month. 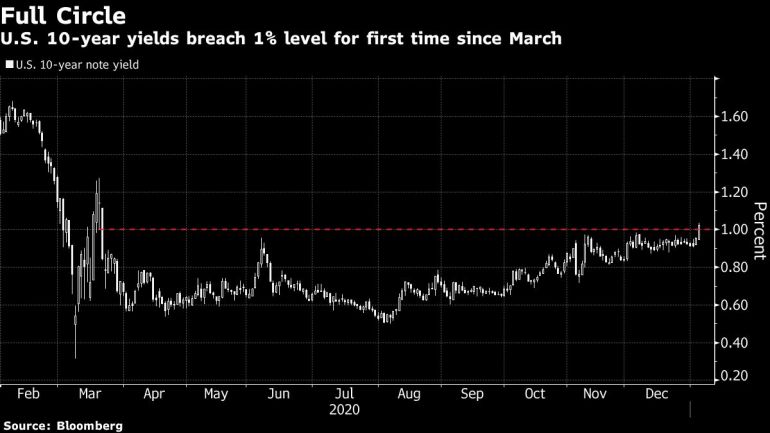 The poor payrolls report will heighten interest in US data on inflation, retail sales and consumer sentiment.

Earnings will also be in focus as JP Morgan, Citigroup and Wells Fargo are among the first companies to release fourth-quarter results on January 15.

The climb in yields in turn offered some support to the down-trodden dollar, which had edged up to 90.439 against a basket of currencies from last week’s low of 89.206.

The sudden lift in bond yields undermined gold, which pays no interest, and the metal fell back 1.1 percent to $1,828 an ounce from its recent peak of $1,959.

Oil prices ran into profit taking after reaching their highest in nearly a year on Friday, gaining 8 percent on the week after Saudi Arabia pledged to cut output.