Consumer confidence in the United States bounced back in a big way in September as Americans grew more upbeat about the economy and their employment prospects.

The Conference Board reported its index of consumer confidence surged 15.5 points from August to a reading of 101.8 in September – the sharpest rise in 17 years.

“Consumers’ present-day views on business conditions and job market were more favourable than in August,” Lynn Franco, senior director of Economic Indicators at The Conference Board told Al Jazeera.

“[Their] short-term outlook (six months ahead) also increased sharply with a greater proportion of consumers expecting business conditions to continue to improve and more jobs to become available,”  Franco added.

Consumer confidence plummeted earlier this year as the coronavirus outbreak and the restrictions and lockdowns that followed shuttered businesses for months and pushed tens of millions of Americans out of work.

But September’s jump shows consumers are feeling much better about the state of the economy and the jobs market than analysts and economists had predicted. Still, consumer confidence remains below pre-pandemic levels.

The gain in the latter index was the largest since 2009.

The Consumer Confidence Survey, whose findings are released at the end of every month, is conducted for The Conference Board by Nielsen, a leading global provider of data and analytics around what consumers buy and watch.

Consumer confidence drives consumer spending, and Americans opening their wallets and swiping their credit cards keeps the economy thriving. If consumers feel confident about where the economy is heading, they spend more and the engine of the US economy keeps roaring. If they are cautious about spending, which they were the last several months, it drags on growth.

And there are potential confidence sappers looming on the horizon, including Congress’s failure thus far to pass a new round of virus relief aid, which could lead to another wave of layoffs.

“Both could have a negative impact on confidence, with the latter potentially having a more prolonged impact,” Franco told Al Jazeera. 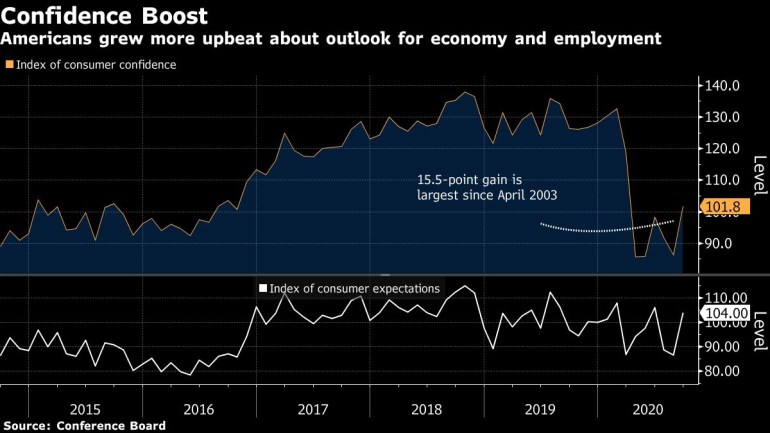 Again, though millions of Americans are still out of work, they are feeling better about labour market prospects. The percentage of consumers saying jobs are “plentiful” increased from 21.4 percent to 22.9 percent, while those claiming jobs are “hard to get” decreased from 23.6 percent to 20 percent.

The proportion of Americans expecting more jobs in the months ahead increased from 29.9 percent to 33.1 percent, while those anticipating fewer jobs decreased from 21.2 percent to 15.6 percent.

Regarding their short-term income prospects, the percentage of consumers expecting an increase improved from 13 percent to 17.5 percent, while the proportion expecting a decrease declined from 16 percent to 12.6 percent.

But with headwinds from coronavirus to an increasingly contentious political landscape, the question is whether the surge in confidence has legs.

“The rebound in confidence suggests that spending may not slow further. If confidence holds up next month, it could be a good omen heading into the holiday season,” said Franco.