President Donald Trump presided over the final years of an economic expansion in the United States that lasted an unprecedented 128 months. But the record run – which began in June 2009  – came to a halt this year when the US and global economies fell off the COVID-19 cliff.

In a matter of weeks, tens of millions of Americans found themselves out of work as businesses in every sector shut their doors.

Back on February 4 –  before lockdown orders swept the nation –  Trump highlighted his stewardship of the economy during his State of the Union address, telling the American people:

“From the instant I took office, I moved rapidly to revive the US economy – slashing a record number of job-killing regulations, enacting historic and record-setting tax cuts, and fighting for fair and reciprocal trade agreements … We are advancing with unbridled optimism and lifting our citizens of every race, colour, religion, and creed very, very high.”

But did Trump’s policies really “revive” the economy for the benefit of all Americans? And does Trump or his Democratic rival, Joe Biden, have the winning policy mix to get the economy back on track as the country remains mired in the coronavirus pandemic? 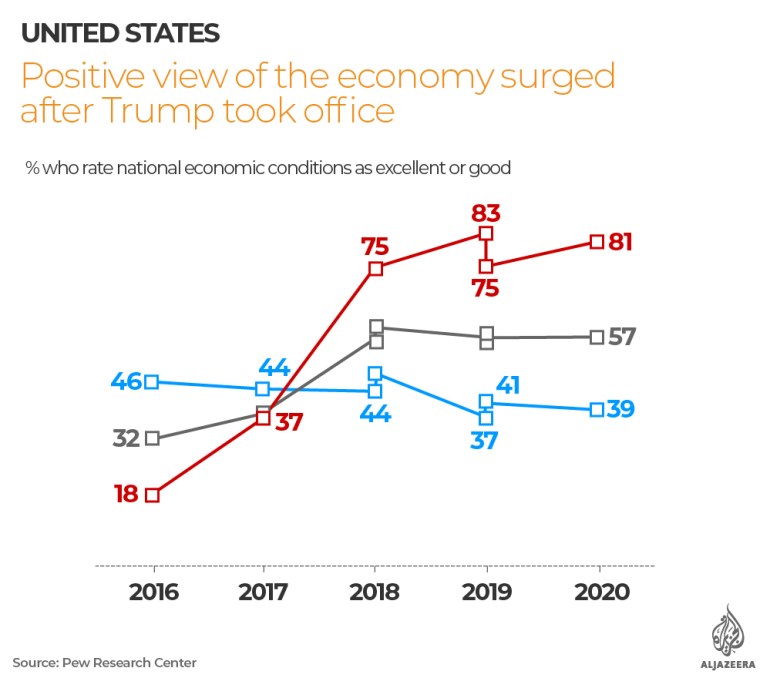 A surge in optimism

The nation’s economic performance hinges on many factors, including human emotions.  When businesses feel confident about the outlook, they are more likely to invest in operations to boost capacity and create jobs.  When people feel positive about the future of their personal finances, they are more likely to spend – a massively important variable, given consumer spending is the engine of the US economy, driving some two-thirds of growth.

After Trump took office in 2017, the US public started to feel a whole lot better about the economy, a survey by the Pew Research Center found.

Partisanship was a driving factor behind the optimism, with Republicans and Republican-leaning Americans experiencing a surge in positive views.

In January, before COVID-19 disrupted nearly every facet of daily life, Americans generally felt better about their economy than at any point over the past two decades.

Some 44 percent of people said Trump’s policies had made the economy better, compared with 26 percent who said they had no effect.

Of course, that was pre-COVID.  To understand how Americans’ views on the economy and potentially four more years of Trump have changed, read on. But first, here is how economic growth and the jobs market changed under Trump – before the coronavirus pandemic struck.

There is no disputing that the economy grew steadily during the first three years of Trump’s presidency, while unemployment continued to fall to hover near a half-century low of 3.5 percent.

Still, the fact that the economy kept growing was touted by Trump’s supporters as evidence of the economic “revival” he helped spur.

The president’s critics though are not so quick to give the political outsider credit.

Instead, they point out that the economy had been on an upward trajectory since June 2009, when it began its long crawl out of the deep hole that was the Great Recession. To detractors, Trump was simply enjoying the momentum created under by the Obama-Biden administration. 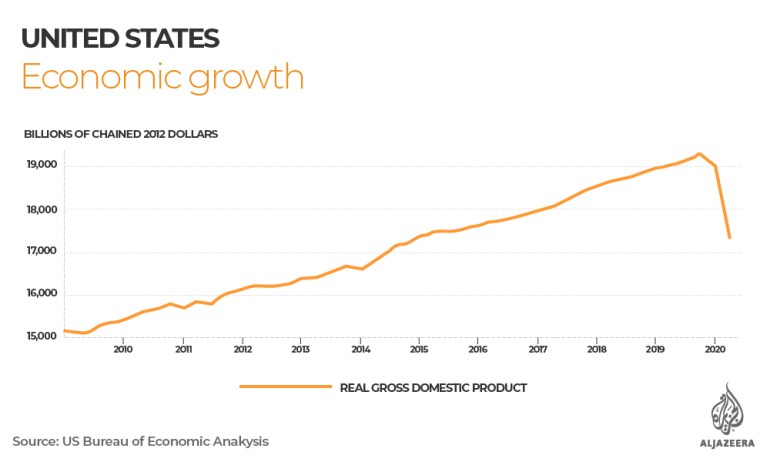 When measured against the data, “revival” is not a fair characterisation. But the expansion that Trump inherited was rather long in the tooth by post-World War II standards.

When he took office in January 2017, the economy was in its 91st consecutive month of growth, and economists, policymakers and investors were seriously questioning how much longer it would continue.

Before 2009, the average run for a post-war growth cycle was 53.25 months, while the previous record run – 120 months from March 1990 to March 2001 – was credited, in large part, to the IT revolution that turbocharged productivity.

There was no IT revolution afoot when Trump was inaugurated, and yet the economy kept expanding for 37 months on his watch.

Which begs the question – was it Trump’s policies that kept the trend going? 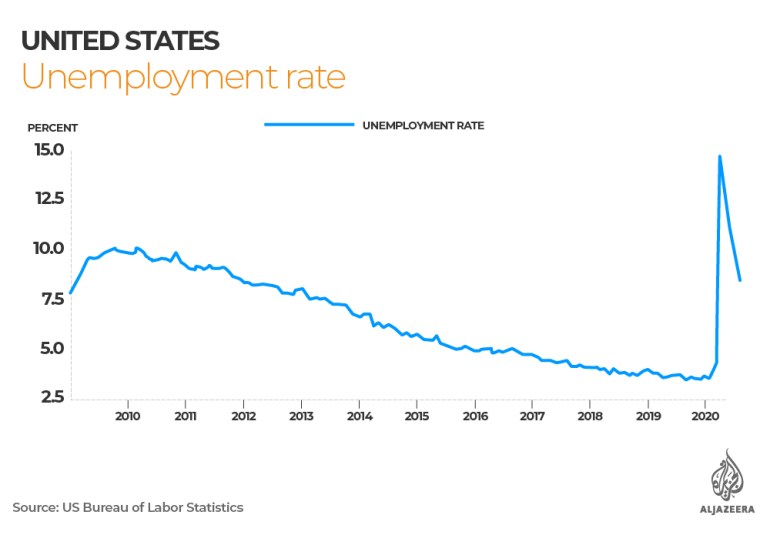 Trump won the presidency in part on his promise to put “America First” and revive the nation’s flagging manufacturing sector.

A hallmark of his administration has been the use of tariffs against major trading partners with the aim of giving goods produced in the US an edge over competitive imports.

Starting in 2018, the US unleashed three separate rounds of actions. The first two targeted all major US trading partners by slapping tariffs on imports of solar panels and washing machines, then steel and aluminium.  The third and biggest round was aimed at the US’s largest competitor and the world’s second-largest economy: China

Over the course of 18 months, the Trump administration slapped punitive levies on $370bn worth of Chinese goods. China responded with retaliatory tariffs on $100bn of US exports.

In January this year, both sides entered into a phase one agreement that saw China pledge to boost purchases of US exports, tighten protections for US intellectual property, stop forced technology transfers and open up its financial services market to US players.

But instead of boosting the US manufacturing sector, the Trump trade wars had the opposite effect – at least in the short term.

What was a healthy manufacturing landscape during Trump’s first year in office started to turn sour in 2018, when factory output began to decline and employment in the sector stalled.

The downward trend was the result of tariffs increasing the costs of imported raw materials for some US businesses, and the negative effect retaliation from trading partners had on US exports, a study by the Federal Reserve found. 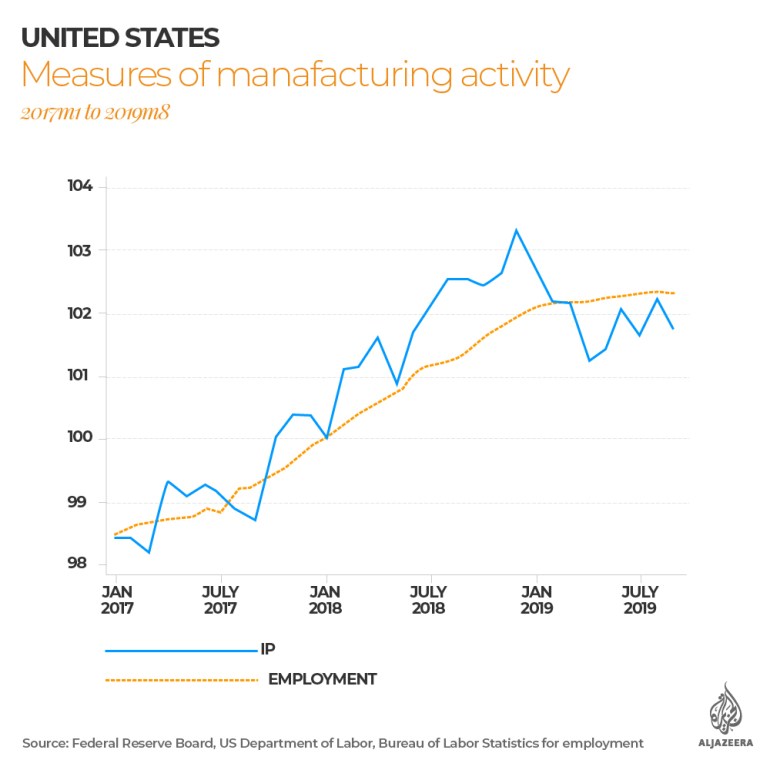 In 2017, Trump scored a significant legislative achievement with his signature Tax Cut and Jobs Act (TCJA). The largest overhaul to the federal tax code since 1986, it was sold by Trump and Republicans in Congress as a reform that would “pay for itself” by boosting growth, driving business investment, creating more jobs and raising wages for workers.

The TCJA instituted many reforms, but the big highlights for business included slashing the corporate tax rate from 35 percent to 21 percent, and revising business tax deductions and international tax rules.

For individuals, the TCJA increased the child tax credit, doubled the standard deduction and reduced the upper limits of most individual tax brackets while lowering rates. 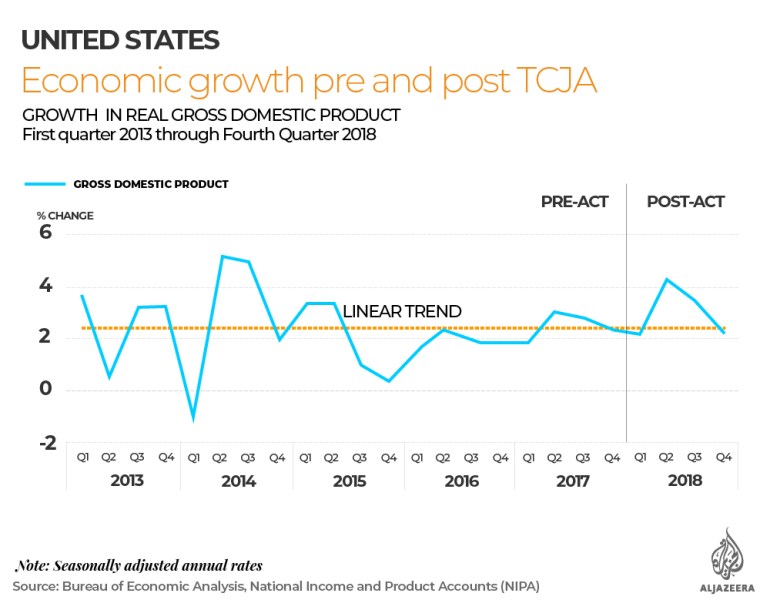 But for all those reforms, the promised economic payoff has yet to materialise. While corporations repatriated a significant amount of income they had hoarded abroad and got a massive tax cut on domestic profits, business investment did not catch fire.

Instead, corporations appeared to use their TCJA windfall to purchase their own stock – driving up wealth for shareholders while doing little to create jobs and boost workers’ wages.

The Congressional Research Service looked at the data and determined that in 2018, the TCJA was not only failing to pay for itself, but it also had “a relatively small (if any) first-year effect on the economy”.

But that does not mean the TCJA was a complete failure. The drag on growth from the Trump administration’s tariffs may have offset the stimulus effect of tax cuts. Moreover, tax changes can take years to ripple through the economy.

One thing that is certain, while the TCJA lowers taxes for American households across the income scale, the better-off get a way bigger break.

An analysis by the Tax Policy Center, a nonpartisan think-tank in Washington, DC found that the largest cuts as a share of after-tax income go to taxpayers in the 95th to 99th percentiles of income distribution, while the poorest households reap the smallest tax cuts.

And after 2025, when the individual tax cuts expire, the nation’s poorest would see their taxes actually increase, while wealthy households would continue to get a tax break. 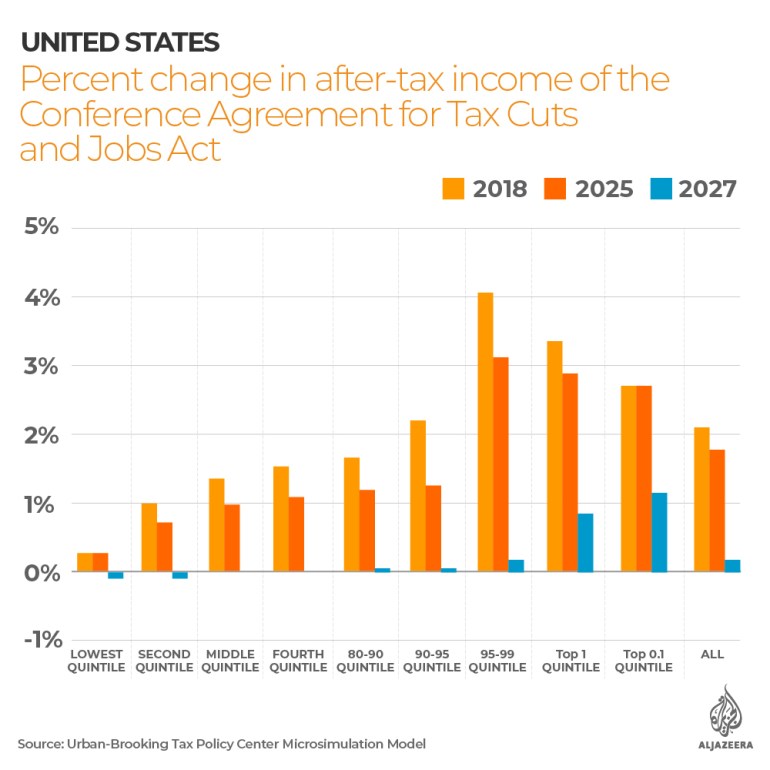 Of course, big or small, a tax break is a tax break.  And it is highly likely consumer spending was boosted by putting more money in Americans’ pockets, especially low and middle-income earners.

But here, too, there were other forces at play driving growth. In 2018, the TCJA was not the only fiscal policy stimulating the economy.  The federal government had also boosted its spending on defense and nondefense programmes in a major way.

There is no disputing that major benchmarks of inequality narrowed on Trump’s watch before the pandemic, largely due to the red hot, pre-COVID jobs market. 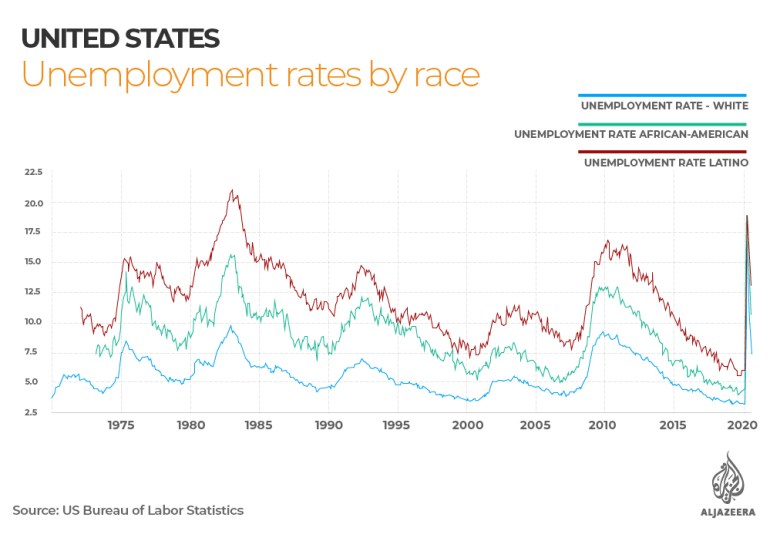 Median household income adjusted for inflation was $68,703 in 2019, an increase of 6.8 percent from the previous year – and the fifth consecutive annual bump, according to the Census Bureau.

The official poverty rate in 2019 was 10.5 percent – the lowest rate observed since the Census started tracking it in 1959. Income inequality also decreased slightly in 2018 and 2019 by some measurements.

Meanwhile, as US Federal Chairman Jerome Powell said earlier this month, anecdotal evidence gathered by the US Federal Reserve through its “Fed Listens” series found that “the robust job market was delivering life-changing gains for many individuals, families, and communities, particularly at the lower end of the income spectrum”.

The coronavirus pandemic has launched the economy into uncharted territory.  Never before in the history of the nation has a shock hit the economy so swiftly and so ferociously.  Some 22 million jobs were lost in March and April as businesses closed and Americans were forced to shelter in place.

Thanks to trillions of dollars in lending stimulus from the Federal Reserve and virus relief aid from Congress, the economy has regained roughly half of the jobs lost.

But as the November 3 election draws closer, and Republicans and Democrats continue to butt heads in Congress over a new round of stimulus funding for struggling businesses and households, there are myriad signs America’s economic recovery is starting to plateau.

Layoffs remain widespread, consumer spending is slowing down and output at the nation’s factories is shifting into low gear.

Little wonder, then, the economy consistently ranks as a top issue with voters. 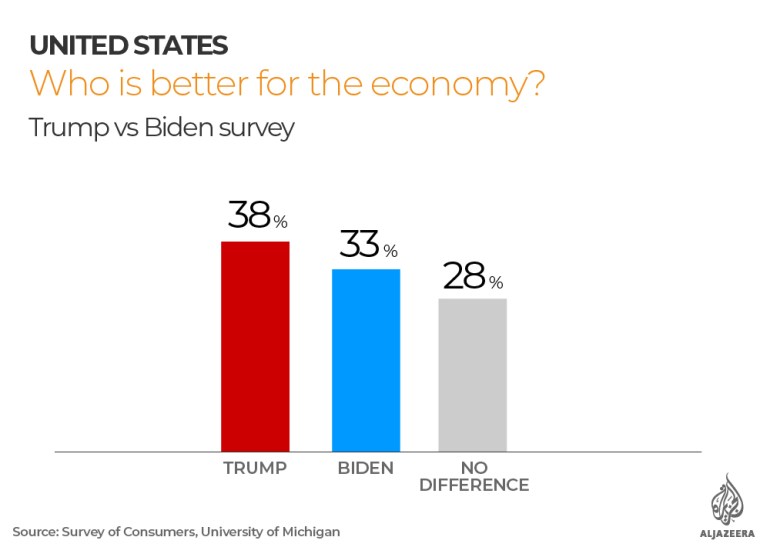 President Trump has presented the formula he used on America’s pre-COVID economy – America-first trade policies, extending tax cuts and rolling back regulations – as the winning combo for getting the post-COVID economy back on track.

Biden’s blueprint, by contrast, aims to revive the economy with policies that redress long-standing racial and wealth inequalities and tackle climate change. The Democratic presidential nominee has pledged to reverse some of Trump’s tax cuts, especially for corporations and the wealthy; invest trillions in a clean energy economy, and invest in child and eldercare.  Biden has also signalled he will be tough on China, but through the multilateral trade dispute body, the World Trade Organization.

When it comes to who is better for the economy’s performance though, voters have consistently leaned towards Trump.

A recent survey of consumer attitudes by the University of Michigan found that 38 percent of Americans believe Trump is better for the economy, compared to 33 percent who believe Biden is.

As for the 28 percent remaining – they think it makes no difference who sits in the White House.

That reality makes for an interesting state of play in US politics right up to Election Day.