Libya’s oil industry, all but shut down since January because of civil war, is reopening – in parts.

The OPEC member’s state energy firm on Saturday announced it would start operations at ports and fields. The National Oil Corp. said force majeure – a legal status protecting a party that can’t fulfill a contract for reasons beyond its control – would continue, however, for facilities controlled by foreign mercenaries and other fighters.

Production in Libya, home to Africa’s largest oil reserves, plummeted to less than 100,000 barrels a day in January from 1.2 million after Khalifa Haftar, a Russian-backed commander who controls the country’s east, blockaded energy infrastructure.

Goldman Sachs Group Inc. forecasts that Libya’s output will rise to 550,000 barrels daily by the end of the year. The NOC can resume exports quickly given that it has large stocks of crude at ports, the New York-based bank said in a note Sunday. Analysts at Bloomberg Intelligence said production could hit 1 million barrels a day in the fourth quarter – putting more pressure on oil prices, which have already been hammered by the coronavirus pandemic – if a truce holds between Haftar and the United Nations-recognized government of Prime Minister Fayez al-Sarraj.

The amount of extra oil Libya can export will also depend on how quickly it can fix wellheads, pipelines and storage tanks that have been neglected or damaged during the conflict. 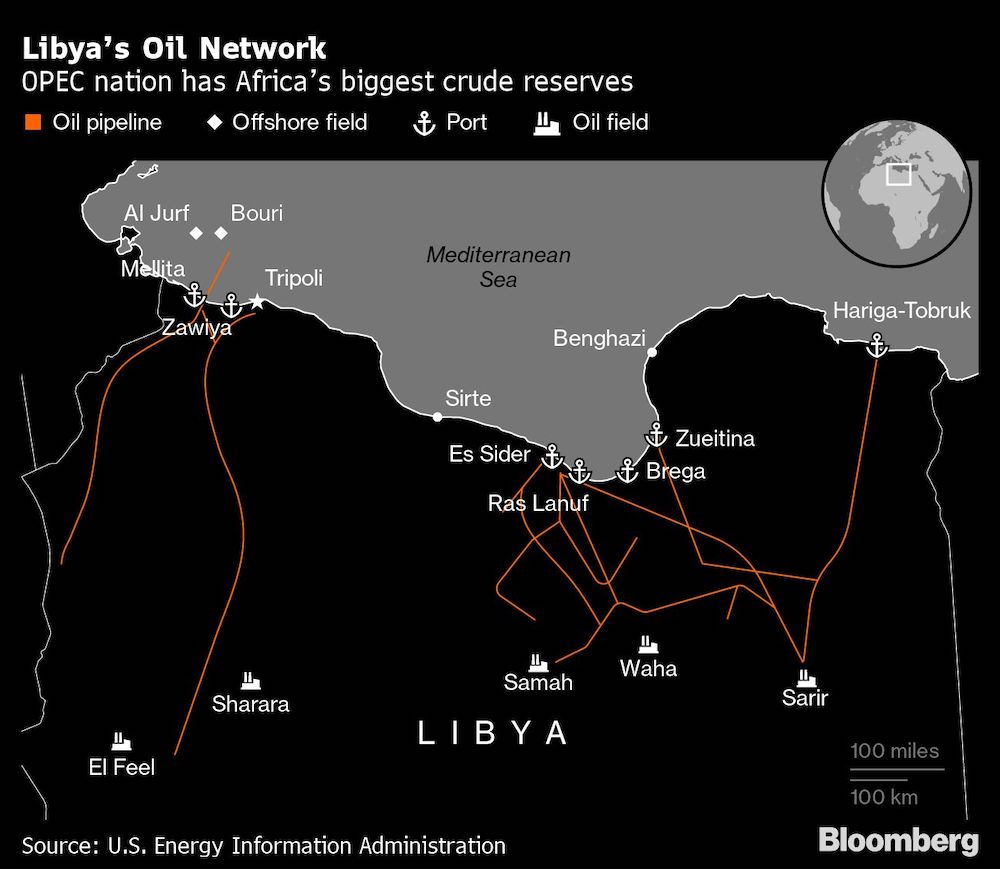 Libya has seen false dawns before. The NOC ended force majeure on Sharara exports in early June, only to close the field again within hours after it was overrun by gunmen.

The NOC’s announcement over the weekend came after Haftar said he would lift his blockade. The commander, who is also supported by Egypt and the United Arab Emirates, cautioned his move was conditional on oil money being shared more evenly between the eastern administration and Sarraj’s Turkey-backed government based in the western city of Tripoli.

Sarraj, who’s often at odds with Maiteeq, has yet to accept the agreement. But the deal is “likely to stick” because it has the broad backing of international powers involved in Libya’s conflict, said Bill Farren-Price, a director at consulting firm RS Energy Group.

“Restarts in the south-west and east of the country could lift Libyan oil production to 500,000 barrels a day within a week or so,” he said. “The field and infrastructure problems will also be easier to fix once the revenue starts flowing again. There are military issues to resolve, but they are all fixable.”

–With assistance from Samuel Dodge.