By Netty Ismail and Abeer Abu Omar and Zainab FattahBloomberg

Determining how much debt Dubai’s government has amassed depends on who’s counting. What is less in dispute is that the uncertainty comes at a cost.

Unlike the government, Moody’s Investors Service and S&P Global Ratings include Dubai’s local bank borrowings to make the calculation, arriving at an estimate of about 290 billion dirhams ($79 billion). The debt burden could equal 77% of this year’s gross domestic product, according to S&P, comparable with what the International Monetary Fund predicts for South Africa and just behind Oman.

However, in the prospectus for its $2 billion bond sale this month, Dubai put its debt at 123.5 billion dirhams, a figure that leaves out what’s owed by the emirate’s government-related entities, or GREs.

“Moody’s and S&P are taking a broader and more conservative approach,” said Todd Schubert, Singapore-based head of fixed-income research at Bank of Singapore. “As investors, we certainly pay attention to what the rating companies think as we realize that other investors incorporate their views into their evaluations of the credit.”

The discrepancy alone may not capture the extent of risks that might lurk off the balance sheet of the city, the second-wealthiest of the seven sheikhdoms that comprise the United Arab Emirates.

Most of Dubai’s GRE debt is issued by private and unrated entities, so there’s “limited visibility” over their financial performance, according to Thaddeus Best, a Dubai-based analyst at Moody’s. On top of the government’s own liabilities, Moody’s “conservatively” estimates the emirate’s non-financial public sector debt at $83 billion. 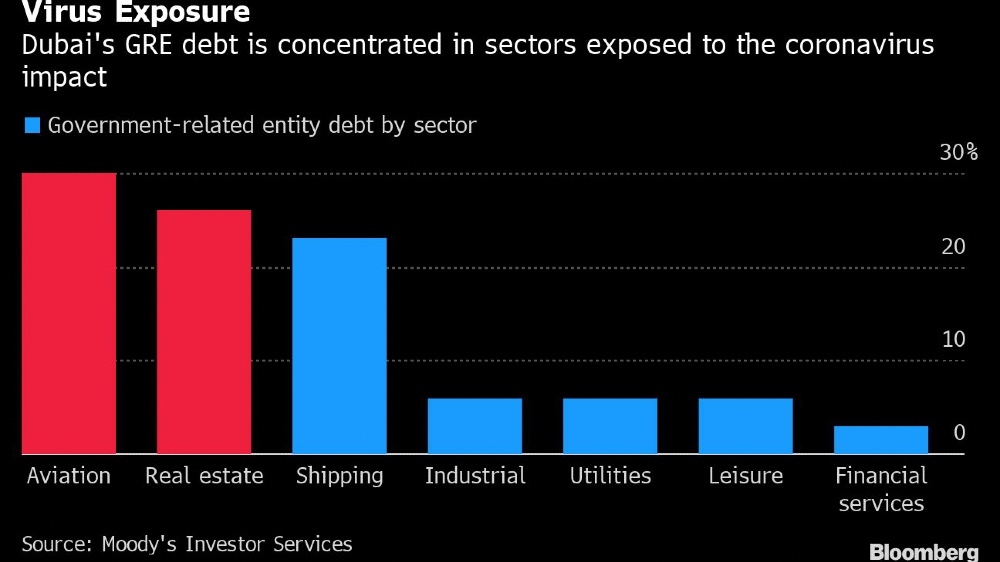 More than a decade ago, Dubai stunned global markets by announcing that state-owned Dubai World would seek to delay debt repayments. Having already tapped the UAE central bank for funds, the city then sought the help of its wealthier neighbor, Abu Dhabi, to avert a default by developer Nakheel PJSC.

By drawing the line around what Dubai considers its direct liabilities, the government is sending a message that it won’t be held responsible for other debt, said Nasser Saidi, who worked as chief economist of the Dubai International Financial Centre during the city’s debt crisis. By contrast, rating companies have to adopt the view of an external investor, which means taking all liabilities into account.

When it comes to borrowings from commercial banks, Saidi said some of the money may be offset by government deposits, since there is usually a working relationship between authorities and lenders. Dubai’s biggest bank, Emirates NBD PJSC, reported its aggregated sovereign loan exposure at almost 162 billion dirhams as of June 30.

The lesson of Dubai’s brush with default in 2009 is that creditors failed to show the government’s guarantee, but the risk of spillover and damage to the creditworthiness of the UAE as a whole prompted Abu Dhabi to intervene, Saidi said. Dubai has since set up a public debt office to monitor the borrowings of the GREs, especially their foreign-currency liabilities. 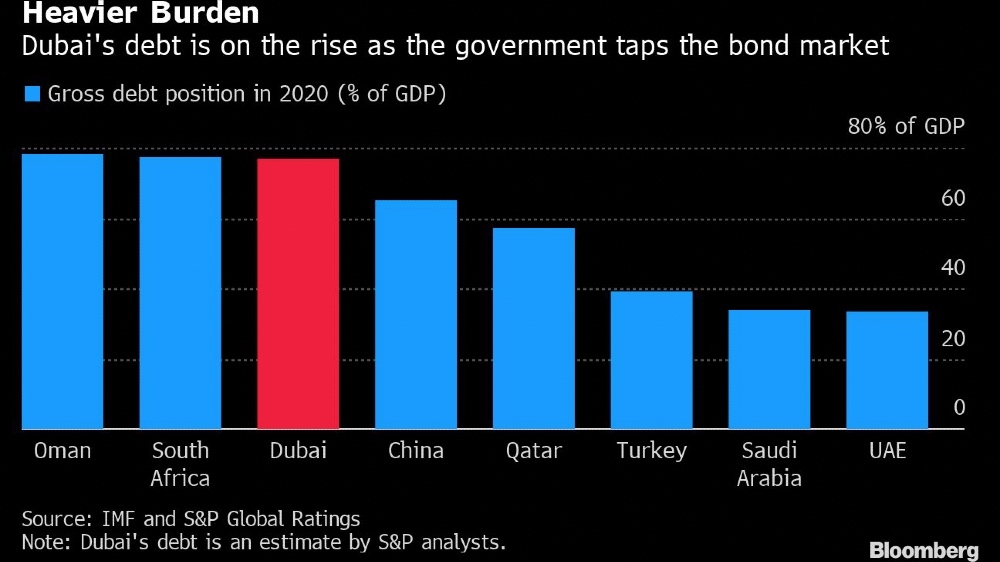 Although the coronavirus pandemic and global recession have revived concerns about Dubai’s debt burden, the government’s ability to raise money this year has put markets at ease.

Investors are pricing in less than a 20% risk of stress, with the gap in the yields between Dubai and Abu Dhabi’s bonds maturing in about 10 years at about 105 basis points, Jaiparan Khurana, a London-based strategist at Morgan Stanley, said in a report. It was as wide as 360 basis points from 2010 to 2012, when “Dubai Inc. was facing financial stress,” he said.

While Dubai isn’t rated by any of the three major credit assessors, their bigger estimate of its debt means the emirate faces higher borrowing costs. Morgan Stanley said Dubai’s bond yield curve should trade wider than the other six UAE sheikhdoms because of its “high public-sector leverage.”

The close ties between the emirate and its government-related entities demand a different approach from investors, according to Sergey Dergachev, a money manager in Frankfurt at Union Investment Privatfonds GmbH who didn’t participate in Dubai’s most recent foreign debt sale.

“Dubai’s case is very complex since you really need to understand the cultural dimension,” he said.