China’s policy makers are in no rush to rein in a rapid advance in the yuan, as traders push the currency toward its largest quarterly rally on record.

The yuan has strengthened 4.3% since the end of June to 6.7730 per dollar, set for the biggest ever quarterly gain in Bloomberg data going back to 1981.

The currency is the best performer in Asia in the third quarter, with the buying momentum being close to the strongest since January.

The yuan is being supported by a slump in the dollar, while Chinese media has been attributing the gains to the nation’s economic recovery.

The People’s Bank of China has also helped by not standing in its way, which for some in the market is an incentive for the currency to push higher.

Beijing’s daily fixings have tracked the spot rate, and officials have not expressed any concern over the currency’s strength. 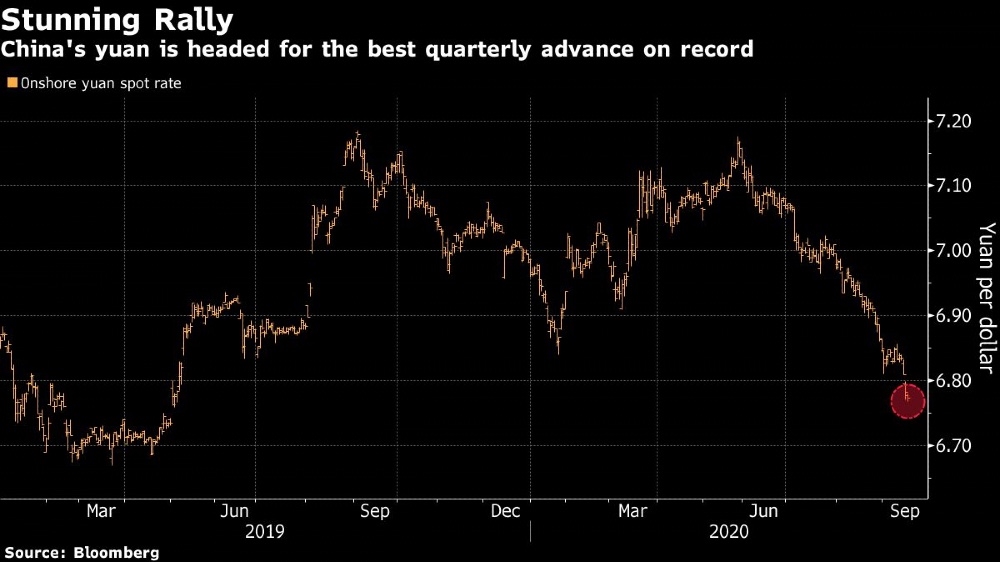 “There is scope for further yuan gains before the authorities start to become concerned about excessive strength,” said Khoon Goh, head of Asia research at Australia & New Zealand Banking Group Ltd., adding that a lack of pushback from Beijing has encouraged him to become more bullish. “It is very likely for the yuan to hit 6.7 in the near term.”

Beijing’s apparent blessing of the rally is a far cry from a few years ago, when the PBOC sought to rein in gains for fears that it would hurt exporters.

What’s different now is China has changed its strategy for boosting growth. It’s now more focused on cheapening imports and bolstering domestic consumption, and a stronger currency could help achieve that.

The yuan’s strength also helps remove a flashpoint in the country’s relations with the U.S., as President Donald Trump had long been accusing Beijing of keeping its exchange rate artificially weak.

This doesn’t mean the PBOC will allow the yuan to gain too fast. One indicator traders follow is the Bloomberg CFETS RMB Index Tracker, which measures the currency against 24 peers.

While it shows the yuan has climbed 2.2% this quarter, it is still well off this year’s peak in March.

The yuan is also close to the weakest level in six years versus the euro, the currency of a major trade partner. That suggests there’s room for further gains.

Beijing will likely slow the appreciation by issuing weaker fixings and relaxing capital controls if the yuan basket rises another 2%, Goh said.