Correction
A previous version of this story referred to Kiryat Gat as a "Jewish settlement". This has been changed to "city" to mark the distinction between communities in Israel proper and illegal settlements in the occupied West Bank.

High-level delegations from Israel and the US have arrived in the United Arab Emirates (UAE), via the first-ever commercial flight between the Middle Eastern nations, to put final touches on a controversial pact establishing open relations.

Top aides to US President Donald Trump and Israeli Prime Minister Benjamin Netanyahu were on board the direct flight from Tel Aviv to the UAE capital Abu Dhabi on Israel’s flag carrier El Al on Monday.

Flight LY971 flew over Saudi Arabia after Riyadh agreed to the Israeli request on Sunday, marking the first time an Israeli commercial plane uses Saudi territory for an overflight.

The plane carrying the US and Israeli delegations to Abu Dhabi has the word “peace” written on it in English, Hebrew, and Arabic. It is also named after Kiryat Gat, a city built on the remains of two ethnically cleansed Palestinian villages, Iraq al-Manshiyya and al-Faluja.

Palestinian Prime Minister Mohammed Shtayyeh on Monday slammed the flight as “very painful” and “a clear and a blatant violation of the Arab position towards the Arab-Israeli conflict”.

“We had hoped to see an Emirati plane landing in a liberated Jerusalem, but we live in a difficult Arab era,” he said.

Announced on August 13, the “normalisation” deal is the first such accommodation between an Arab country and Israel in more than 20 years and was catalysed largely by shared fears of Iran.

Palestinians were dismayed by the UAE’s move, worried it would weaken a long-standing pan-Arab position that called for Israeli withdrawal from occupied territory and acceptance of Palestinian statehood in return for normal relations with Arab countries.

Hamas spokesperson Hazem Qassen said the UAE-Israel deal went against the position of the Emirati people, and was “in Zionist interests only … fuelling disagreements in the region”.

Kushner voiced hope for a more peaceful era in the region.

“While this is a historic flight, we hope that it will start an even more historic journey in the Middle East and beyond,” Kushner said before boarding the El Al aircraft.

Officials will explore bilateral cooperation in areas such as commerce and tourism, and Israeli defence envoys are due to visit the UAE separately.

That could give Trump a foreign policy boost ahead of his re-election bid in November.

In Jerusalem on Sunday, Kushner called the UAE-Israel deal a “giant step forward”.

“To have played a role in its creation, and I say this as the grandson of two Holocaust survivors, it means more to me and to my family that I can ever express,” Kushner said.

The Trump administration has tried to coax other Arab countries concerned about Iran to engage with Israel.

“We believe that other Arab and Muslim countries will soon follow the United Arab Emirates’ lead and normalise relations with Israel,” he told reporters after talks at Netanyahu’s residence.

He did not name the states, but Israeli officials have publicly mentioned Oman, Bahrain and Sudan.

Recent news reports suggested Morocco may also be considering a similar agreement with Israel in exchange for military and economic aid.

However, Moroccan Prime Minister Saad Eddine el-Othmani said last week, “We refuse any normalisation with the Zionist entity because this emboldens it to go further in breaching the rights of the Palestinian people”.

In the Israeli-occupied West Bank, Hanan Ashrawi, a member of the Palestine Liberation Organization’s executive committee, said Kushner and his team were “scrambling to convince as many Arab and Muslim leaders as possible” to give Trump an election boost.

“They will be a prop at the backdrop of a meaningless spectacle for a ridiculous agreement that will not bring peace to the region,” she said.

The UAE-Israel agreement hit an immediate speed bump after it was announced, as contradictory comments on the planned Israeli annexation of parts of the West Bank and Jordan Valley were made.

In spite of earlier comments by the UAE and a joint statement by the three countries that indicated the annexation plan would be “suspended”, senior UAE official Omar Ghobash, has admitted his government did not “have any guarantees as such” that Israel would not annex occupied Palestinian territory in the future.

Kushner has said as part of the Israeli-UAE deal that the US will not consent to Israeli annexation for “some time”.

Netanyahu, meanwhile, cast the annexation plan – already dogged by disagreements within his governing coalition on the proposed timing – as temporarily on hold. But Israeli officials have signalled they want approval from Israel’s main ally – the US – first.

The Israel-UAE accord also faces another problem: a possible sale of stealth F-35 fighter jets to Abu Dhabi that could challenge the Israeli technological edge in the Middle East.

Netanyahu has denied reports the deal hinges on the sale of F-35s to the UAE, saying he opposes a move that could reduce Israel’s military advantage.

“This deal did not include Israel’s acceptance of any arms deal,” the Israeli prime minister said last week.

Ever since the 1960s, the US has guaranteed to maintain Israel’s “qualitative military edge” in the region.

The policy was enhanced two years ago with a law that Washington must ensure, when selling weapons to another country in the Middle East, that Israel retains the ability to defend itself if the arms were to fall into the wrong hands.

Israel has already received a first consignment of American F-35s, a fighter also coveted by other Gulf powers.

Yoel Guzansky, a senior analyst at Israel’s Institute for National Security Studies, told AFP there is no doubt of the importance of the F-35s.

“I absolutely think that without the F-35, the possibility of buying it, they [the Emiratis] wouldn’t sign the agreement,” said Guzansky. “This is a big hurdle to the fulfilment of the agreement.”

Guzansky noted before Iran’s Islamic revolution of 1979, the US sold Turkey and Iran sophisticated weaponry, “and now these countries are hostile towards Israel”.

But some analysts say a deal can be struck to the satisfaction of both Israel and the UAE, and ultimately Saudi Arabia, a longtime customer of US armaments.

“Although this is not really public, from what I understand arrangements are being made that the version that the Arab country gets is not the absolute latest version,” Joshua Teitelbaum, a Gulf specialist at Israel’s Bar-Ilan University told AFP.

On Saturday, the UAE announced it was scrapping its economic boycott against Israel. Officials from the two countries have said they are looking at cooperation in defence, medicine, agriculture, tourism and technology.

Statements issued by the UAE and Israel on Sunday said the UAE minister of state and Israel’s agriculture minister had spoken by phone and “pledged to collaborate on projects that address food and water security”.

The UAE, a desert state, relies on imports for about 80 percent of its food, and has heavily encouraged investment in agricultural technology and farmland abroad in recent years.

Israel and the UAE say they want to promote trade – especially the sale of Emirati oil to Israel and Israeli technology to the UAE – establish direct air links, and boost tourism. 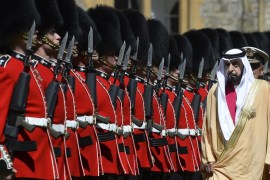 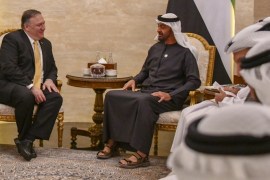 Emiratis reportedly angered by Netanyahu’s public denial of the deal and his vow to lobby US Congress to oppose it. 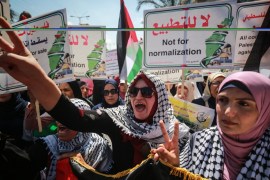 Protesters in Gaza City chanted against UAE-Israeli normalisation, saying it is a ‘betrayal to Jerusalem and Palestine’.