China will not accept the United States’ “theft” of a Chinese technology company, state media said, adding that Beijing has ways to retaliate against Washington’s pressure on Chinese-owned app, TikTok.

The Trump administration’s pressuring of ByteDance, TikTok’s parent company in China, to sell its US operations to Microsoft or risk closure amounts to a “smash and grab”, the state-run China Daily newspaper wrote in an editorial on Tuesday.

While Beijing will likely be “cautious” in imposing equivalent restrictions on US companies in China, it has “plenty of ways” to retaliate, the paper said.

Microsoft said on Monday it was in discussions with ByteDance to buy parts of TikTok after US President Donald Trump gave the companies 45 days to reach a deal.

Trump has threatened to ban TikTok in the US on national security grounds by September 15, whether or not a deal with Microsoft is reached.

TikTok has as many as one billion worldwide users, who make quirky 60-second videos with its smartphone app.

Also on Tuesday, Chinese foreign ministry spokesman Wang Wenbin accused the US of “bullying” over TikTok, accusing the Trump administration of trying to financially benefit from the deal.

“This goes against the principles of the market economy and the [World Trade Organization’s] principles of openness, transparency and non-discrimination,” Wang said. “It’s outright bullying.”

The popular app has been under formal investigation on US national security grounds, because it collects large amounts of personal data on users and is legally bound to share it with authorities in Beijing if they demand it.

“It’s got to be an American company… it’s got to be owned here,” Trump said on Monday. “We don’t want to have any problem with security.”

Wang told a regular press briefing Tuesday: “The US, without providing any evidence, has been using an abused concept of national security… unjustifiably suppressing certain non-US companies,” said Wang.

US Secretary of State Mike Pompeo said over the weekend that Washington may take action “shortly” against TikTok and other Chinese companies believed to share data with the Chinese government.

ByteDance said in a statement on Monday it was still committed to being a global company despite “complex and unimaginable difficulties”, including the “tense” international political environment.

Meanwhile, China on Tuesday said it would retaliate if Washington continues what it described as hostile actions against Chinese journalists based in the US.

Chinese foreign ministry spokesman Wang Wenbin said the ministry understands that no Chinese journalist in the US have had their application for a visa renewal approved since Washington in May moved to limit their visas to 90 days with an option for an extension.

On Monday, Wang accused the US of “monitoring, harassing and willfully detaining” Chinese students and researchers in the US.

“The US actions have seriously violated the legitimate rights and interests of Chinese citizens and severely disrupted the normal cultural and personnel exchanges between China and the US, which amounts to outright political persecution,” Wang said. 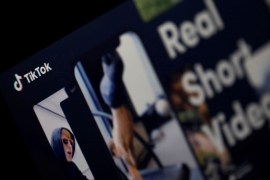 Give US gov’t ‘substantial portion’ of TikTok’s sale price: Trump

President Trump says he will ban Chinese video app by September 15 if Microsoft or other US company does not acquire it. 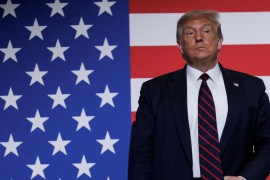 Why does Donald Trump want to ban TikTok?

After Huwaei, the US president is taking aim at another Chinese-owned company, citing security concerns.