The world’s steepest deflation is set to linger across Gulf Arab states as the coronavirus pandemic broadens a slump in prices that started with a downturn in their housing markets.

Price declines in Qatar, Bahrain and the United Arab Emirates are currently the biggest among more than 80 countries tracked on Bloomberg’s Global Economy Watch. Oman, another of the six members of the Gulf Cooperation Council, isn’t far behind. Inflation has been positive in Kuwait and recently picked up in Saudi Arabia after it tripled its value-added tax. 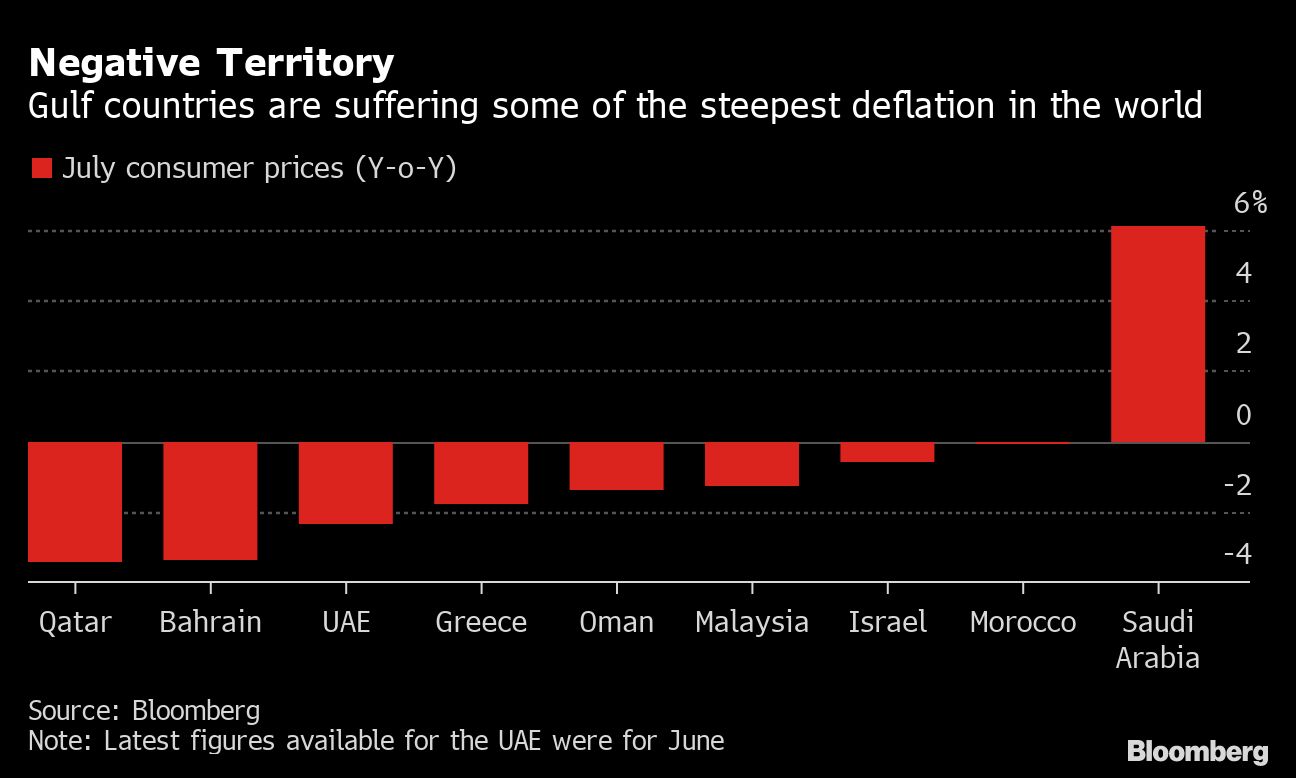 Restrictions imposed to stop the virus have translated into record deflation from Qatar to the UAE as social-distancing rules, job losses and the departure of foreign workers crushed consumer demand. Adding to the drag from housing, a downswing in oil is another challenge for the region’s $1.6 trillion economy, putting it on course for what could be its worst recession on history.

Last year, deflation in the GCC was fueled by an excess capacity in the real estate market. The downward momentum is now exacerbated by the coronavirus, which is hitting sectors left and right. There is little sign of inflation going back into positive territory this year

Whether inflation is on the way back is now a key question that divides the financial world. In the Gulf, the threat of sustained price declines may not have the same implications as it would for countries with independent monetary policy and flexible exchange rates. Most local central banks generally track interest-rate decisions by the U.S. Federal Reserve to protect their currencies’ pegs to the dollar.

But the extent and duration of falling prices give a glimpse into the damage to consumer confidence and the adjustments among households that followed. A monthly EY Future Consumer Index survey in August found that frugality is increasingly becoming the norm in the Middle East and North Africa, marking a shift in behavior that may endure even after the crisis is over. 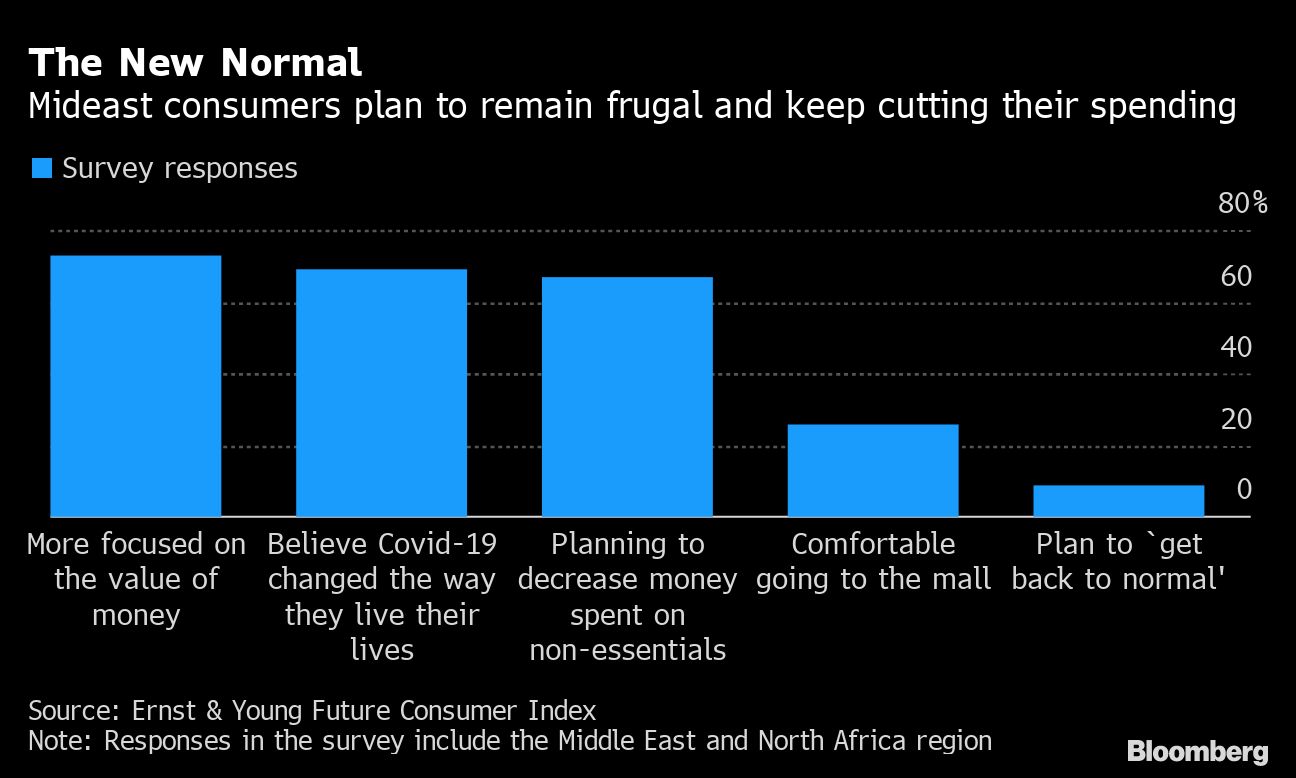 The whiplash was especially strong once coronavirus cases began to rise quickly in the region from March. In the UAE, prices for culture and recreation were growing at an annual pace of almost 11% in February. By June, they were down nearly 19% from a year earlier. 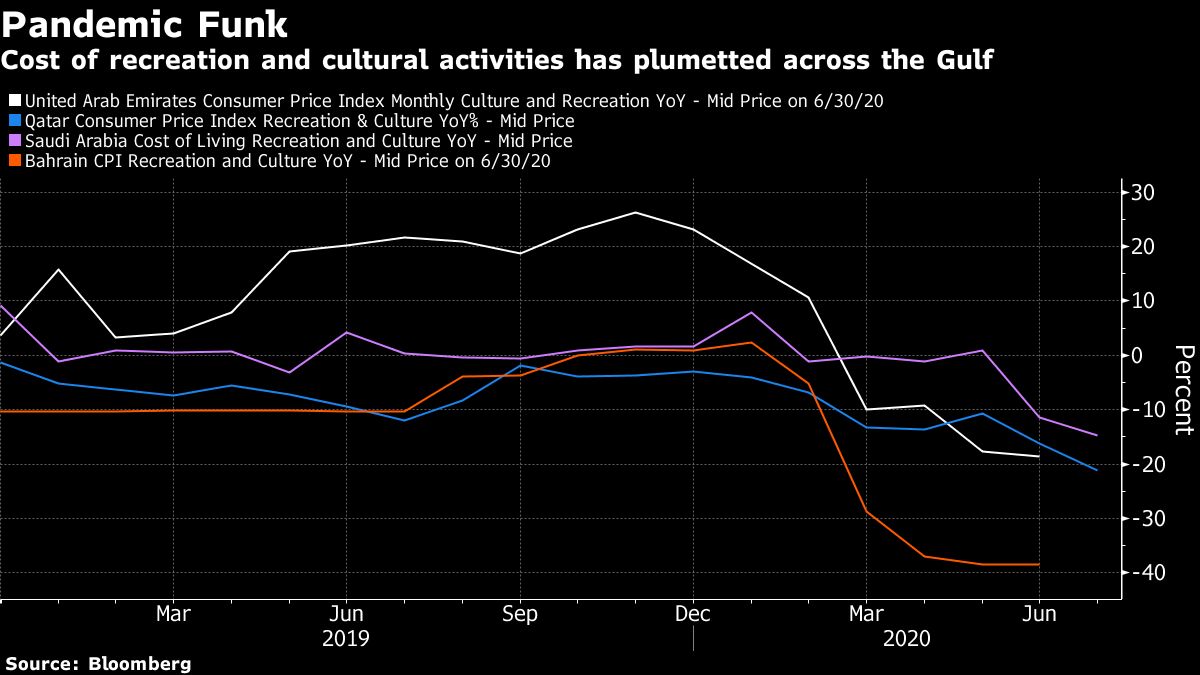 A lasting reversal in inflation is unlikely until the property market picks up. In the UAE, a category that includes housing prices accounts for more than a third of the consumer goods basket.

The outlook remains far from favorable, with S&P Global Ratings saying that in the case of Dubai, the fall in residential prices could extend “well into 2021.”