The United Kingdom’s government debt has breached the 2 trillion-pound ($2.6 trillion) mark for the first time ever as it engages in a borrowing binge to shore up businesses and households during the coronavirus pandemic.

The Office for National Statistics said on Friday the government borrowed a further 26.7 billion pounds ($35bn) in July, the fourth-highest amount of any month since records began in 1993. That pushed up debt to 2.004 trillion pounds.

The increase also means that the country’s debt is now higher than the value of its economic output. The UK’s debt is worth 100.5 percent of its annual GDP, the first time it has gone beyond 100 percent since 1961.

The deterioration in the public finances is due to the massive support schemes the government has put in place over the past few months to cope with the economic shock of the pandemic, which has already seen the British economy shrink by about a fifth. The government has cut an array of taxes and spent heavily, notably on a widely used salary support scheme.

“This crisis has put the public finances under significant strain as we have seen a hit to our economy and taken action to support millions of jobs, businesses and livelihoods,” Treasury chief Rishi Sunak said. 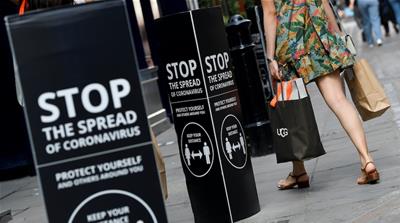 “Without that support things would have been far worse.”

There are some signs that the economy is picking up steam following an easing of lockdown restrictions over the past couple of months.

Perhaps the most important move for the economy’s health was the reopening of shops selling items deemed to be nonessential, such as sneakers or books, in mid-June. That was particularly important for an economy that is heavily reliant on the retail sector.

Figures released on Friday showed that shoppers returned to high streets in increasing numbers in July even though business at clothes and household goods stores remains below pre-pandemic levels.

The statistics agency said retail sales rose by a monthly 3.6 percent and are now 3 percent above pre-pandemic levels. There is a distinct split in the overall increase though between food and online retailers, which have surpassed February’s sales figures, and non-food businesses, which have not.

“Retail sales have now regained all the ground lost during the height of the coronavirus restrictions as more stores open for trade and online sales remain at historically high levels,” statistician Jonathan Athow said.

The government is hoping that a buoyant retail sector will help protect millions of jobs in the coming months.

So far, the UK has been spared the sharp rises in unemployment seen in the United States, for example, because of the government’s Coronavirus Job Retention Scheme, which pays the majority of the salaries of workers who have not been fired. Some 1.2 million employers have taken advantage of the programme to furlough 9.6 million people at a cost to the government of 35.4 billion pounds ($46.3bn).

Sunak has said that not all jobs can be saved and has warned of a sharp rise in unemployment. Already, the pandemic has led to more than 40,000 job losses. Marks & Spencer said this week it was cutting 7,000 jobs and other household names like Debenhams, House of Fraser and John Lewis have also voiced concern.