Oman received its second downgrade this year from Fitch Ratings because of what it called the “continued erosion” of the country’s fiscal and external balance sheets.

Fitch lowered Oman’s sovereign rating one notch to BB-, three steps below investment grade and on par with Brazil, Turkey and Bangladesh, according to a statement on Monday. The outlook is negative. Fitch’s latest downgrade brings its ranking of Oman to the same level as that of Moody’s Investors Service and S&P Global Ratings.

Even before the virus outbreak and declines in oil prices, Oman was already among the most vulnerable economies in the six-nation Gulf Cooperation Council. It’s now on track to run a budget shortfall that Fitch estimates at nearly 20% of gross domestic product in 2020, compared with about 8% in 2019.

“We expect fiscal reform and higher oil prices to narrow the fiscal deficit to the mid-single digits by 2022, but there are considerable downside risks to this forecast,” Fitch analysts including Krisjanis Krustins said in the report.

The Gulf nation’s dollar bond due 2048 gave up earlier gains to hit a session low after Fitch’s announcement, with its yield dropping 1 basis point to 7.6%. Oman’s sovereign rating was already downgraded twice in 2020 by Moody’s.

“The coming three years will be a critical test of the funding flexibility that Oman has displayed in the past, and a steep maturity schedule will keep Oman’s funding needs large beyond that, even as the fiscal deficit is reined in,” Fitch said. 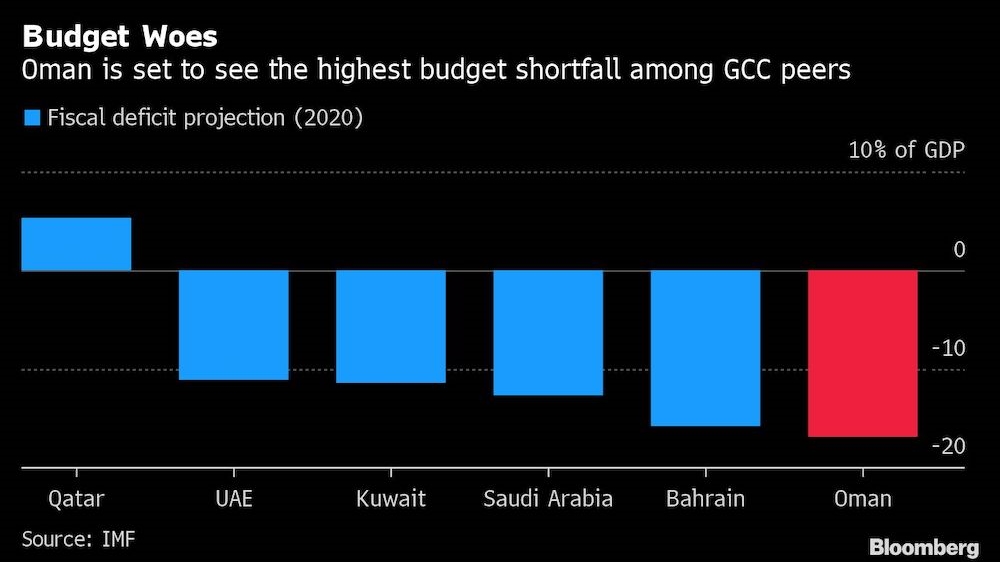 More from the report:

Although assistance from Oman’s Gulf neighbors remains an option, Fitch expects any GCC aid program “will be calibrated to facilitate but not meaningfully replace debt market funding,” according to the statement.

“The size, timing and form of further support remain uncertain amid Oman’s desire to maintain geopolitical neutrality, political and fiscal challenges in the rest of the GCC and the large size of Oman’s funding need,” it said.