Getting students safely back into the classrooms during a pandemic means taking the kind of measures – like shrinking class sizes, adding bus routes and providing computers to families who don’t have them – that call for extra staff and money.

But it looks like America’s schools will have to manage with less of both. Even before Covid-19 struck, staff levels hadn’t recovered from the last recession. Now, hundreds of thousands more jobs have disappeared – and there’s probably more to come. 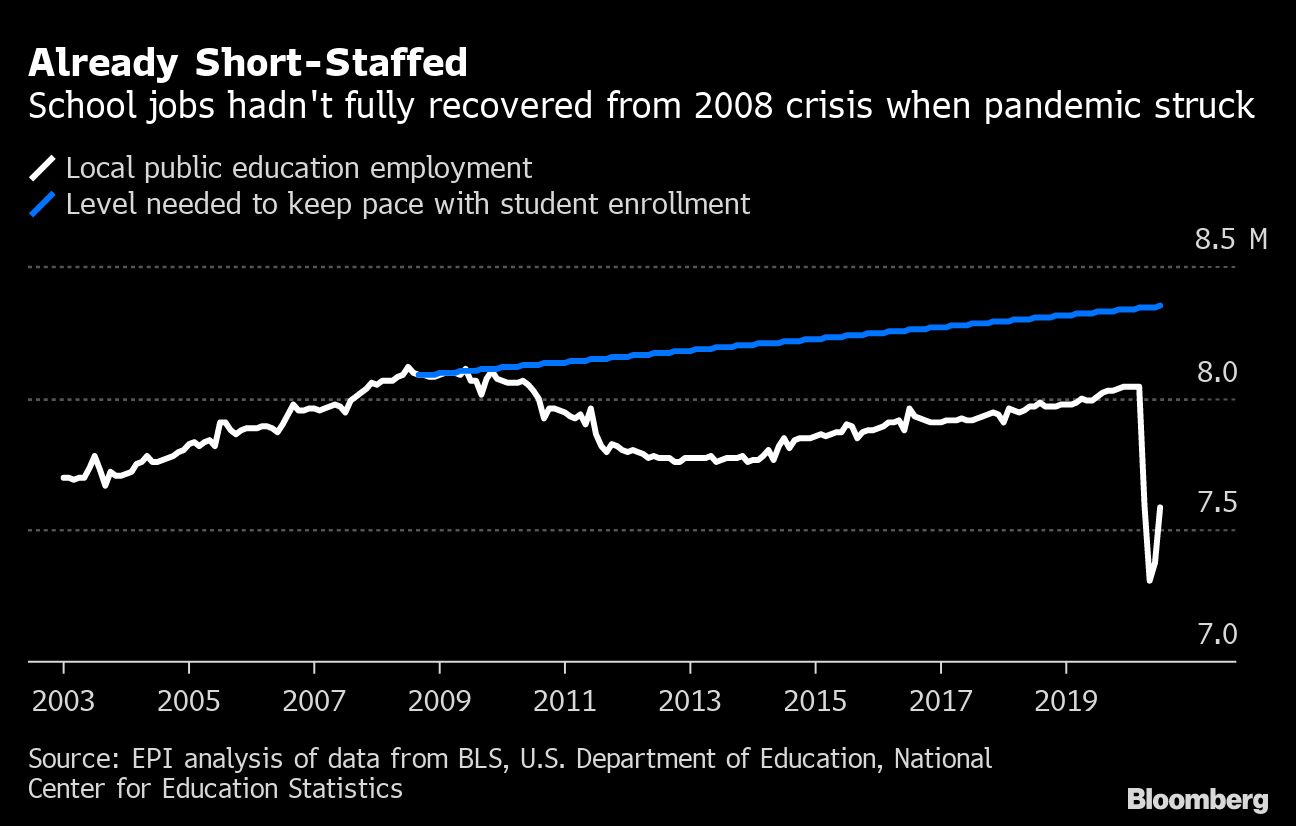 The messy restart to the school year is a drag on the whole economy, leaving millions of parents struggling to balance work and child care. Meanwhile, administrators are having to draw up plans without knowing what resources they’ll have available, while bracing for budget cuts that could arrive anytime, as the virus leaves states facing an estimated $555 billion shortfall through 2022.

Kenneth Hamilton is superintendent of the Mount Vernon City School District in New York, where Governor Andrew Cuomo last week gave schools a green light to reopen for in-person classes. Hamilton is aiming for a hybrid start in September, with a blend of classroom and virtual teaching – but he says it would cost about $1 million just to buy protective equipment for staff and students. And he’s been told to anticipate as much as a 20% reduction – roughly $15 million – in state aid for the coming year.

“If you need to cut a couple hundred thousand dollars, you can cut back on pencils and crayons,” he says. “When you get into the millions of dollars, you’re talking about programs, people and services.” Hamilton has already cut about 20 jobs, and sent potential layoff notices to the district’s 1,700 employees.

Like the coronavirus itself, and the economic slump that it triggered, America’s schooling crisis is likely to hit low-income people hardest. That’s partly because of how the system is financed.

School districts rely on a mix of local, state and federal dollars. At the local level, money is largely gathered through property taxes, which are a relatively stable and recession-proof source of revenue – and one that’s more robust in richer communities. Lower-income school districts tend to be more reliant on state money. 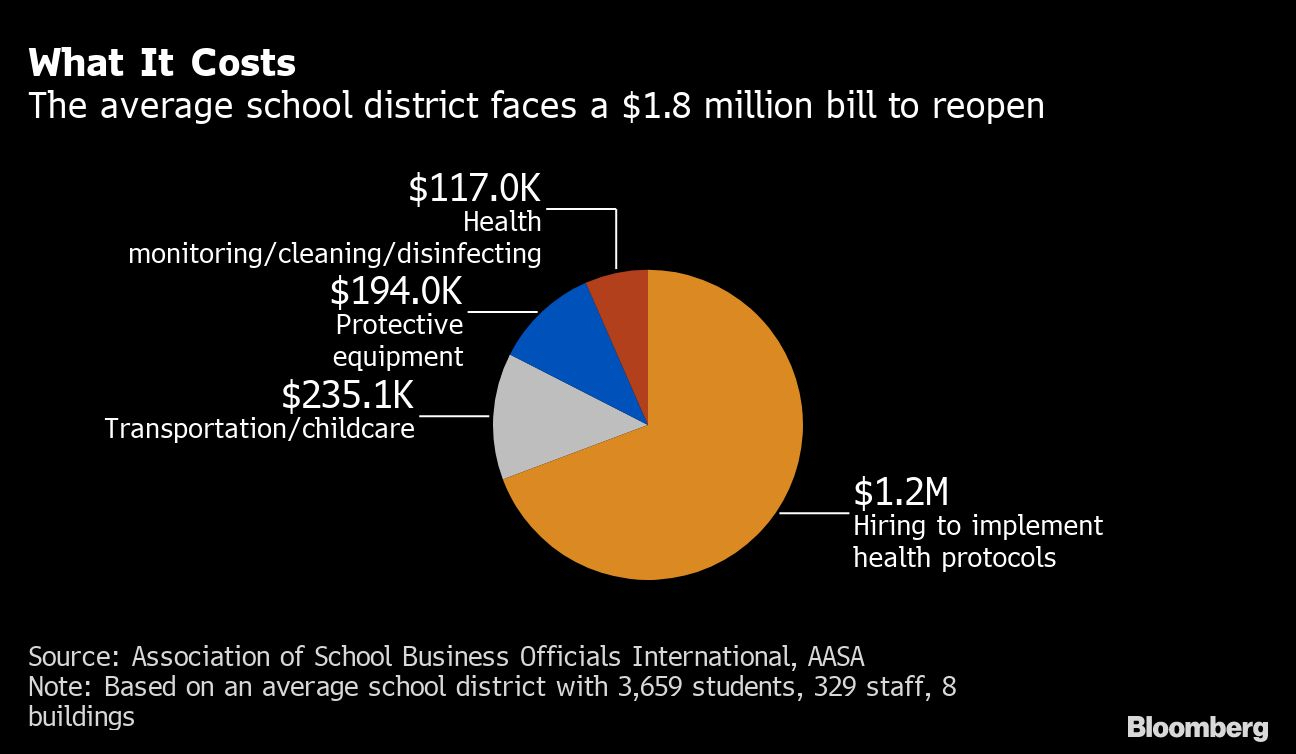 In the Oak Park School District near Detroit, where 97% of students are Black, state funds account for an unusually large chunk of the budget – about three-quarters. Like most of the country’s largest school districts, Oak Park is planning to start the school year offering online classes only. That’s meant investing to get Chromebooks and Internet connections into student homes, but it allows some of the tougher financial decisions to be delayed.

Still, Superintendent Jamii Hitchcock says she’s had to budget for the year without knowing how much, or when, her funding will be cut. “It’s like trying to buy a house without knowing what your salary is,” she says. “It’s close to impossible.”

In the likely event that there’s less money, “we would have to look at reducing staff,” Hitchcock says. All the options are bad. Fewer teachers would mean bigger classes, but “we already had 31 first-graders in one classroom.” Cutting social workers or counselors would erode support networks in a community that’s been hit hard by Covid-19: “Most of our students have experienced some type of loss.” 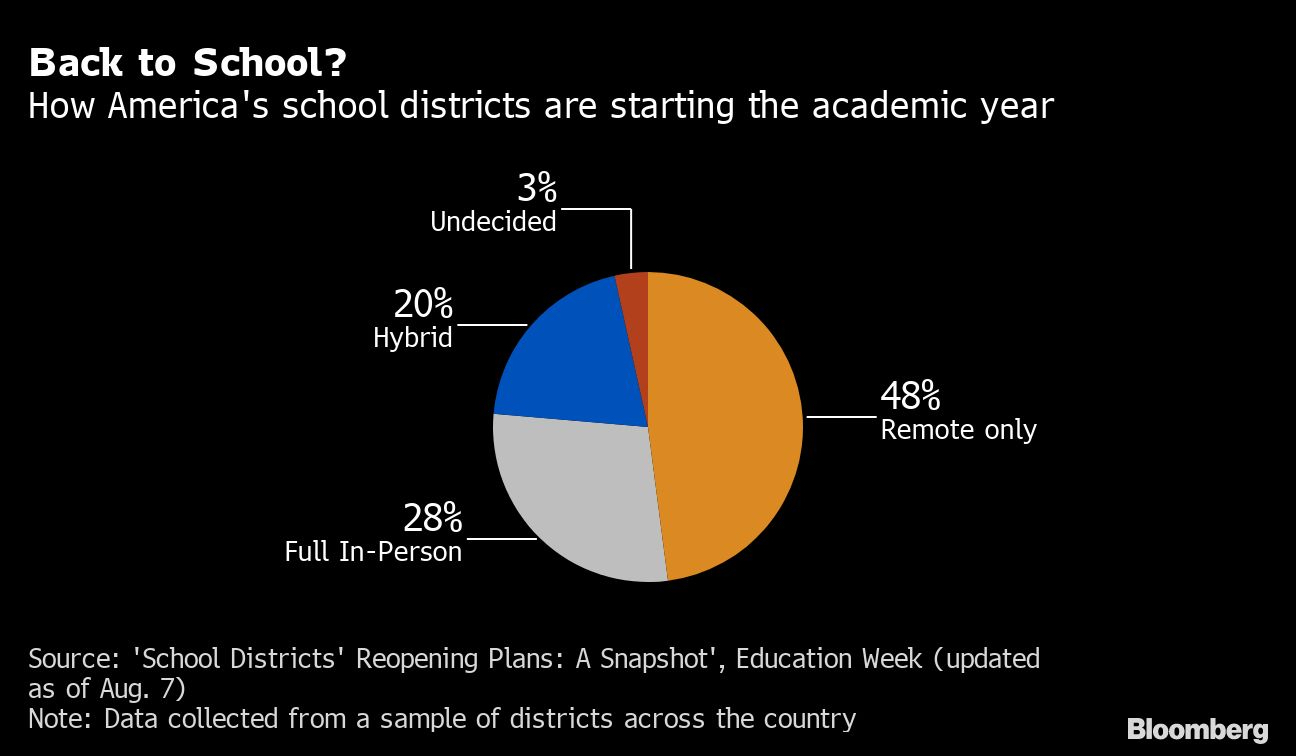 The government’s main virus relief bill in March provided about $13 billion for K-12 schools. Federal aid on a much bigger scale is needed – but with the school year already under way in some places, and just weeks away elsewhere, there’s still little clarity about how much will arrive, or who’ll get it.

Republican and Democratic lawmakers remain deadlocked over stimulus plans. President Donald Trump has asked for $70 billion for K-12 education, but he wants about half the money to be earmarked for schools that reopen. With teachers protesting against the health risks, local officials have been backing away from that option.

Kelley Williams is superintendent of the Pontiac School District in Michigan, where the federal government contributes about 30% of the budget.

Williams is also aiming for a hybrid start. Even if a full reopening would bring more federal cash, she doesn’t want to take the health risks.

“We shut schools down back in March with just a few cases, and now we’re up to thousands in some states,” she says. “And we’re talking about returning back to school at full capacity? That just makes no sense. That’s setting us up for disaster.”