If the outbreak roars back in New York City, Anil and Joyce Lilly will not be sheltering again in their Bronx apartment. They just bought a house an hour north in the Hudson Valley.

“We need more elbow room,” said Joyce Lilly, explaining their move to Washingtonville, New York. “Because we were locked into the apartment for three months, a solid three months, I feel like I’m getting out of prison and I want to run as far away as possible.”

New Yorkers, anxious after weathering the worst of the coronavirus pandemic, are creating a boom in home sales and rentals around the picturesque towns and wooded hills to the north. Real estate brokers and agents describe a red-hot market recently, with many house hunters able to work from home.

Music and video producer Erik Braund, moving his family of four from the Upper East Side to Saugerties

“There has been a big uptick from Manhattan people, no doubt about that,” said Steven Domber, president of Berkshire Hathaway HomeServices Hudson Valley Properties. “Number one, it’s cabin fever, which is wanting to get out of an apartment and having some land if, God forbid, there’s a lockdown again.”

The Catskill Mountains and bucolic stretches of the valley beyond the city’s northern suburbs have been longtime getaways for city residents. But agents said sales and rental activity is far above normal. Domber’s sales were up almost a third year over year in June. Builder Chuck Petersheim said he took eight orders in a month, compared with his usual one and a half a month.

New York City is in no danger of hollowing out any time soon, though. The upstate wave looks more like a trickle in a city of 8.3 million. With new homes in the region running from under $200,000 to more than one million dollars, they are an escape hatch many cannot afford. But the spike in sales and long-term rentals shows how New Yorkers who endured the worst of the pandemic see the city as less hospitable.

“We just feel that the city will not be the city that we lived in,” said Susan Cohen, who rented a home in Rhinebeck with her husband after sheltering in their Upper East Side apartment.

“For six weeks, in our two-bedroom apartment, all we talked about was without a vaccine; we will never go on the subway again; we’d be hesitant to go on a bus again; we won’t go to the movies; we won’t go to the theatre … So what do we have for the next two years in Manhattan? And we said, ‘What are we living here for?'”

County-level home sales figures from May still show a dip compared with last year, but that reflects the one- to two-month lag between offers being accepted and closings. Agents describe recent weeks of bidding wars over homes that had been languishing on the market and new listings being snapped up fast by buyers with cash. Realtor John Murphy said some homes are selling $100,000 or more above the asking prices.

“I think this was the event that got people off the fence,” said broker Gary DiMauro. “I think we also got people who were thinking about buying either a first or second home up here to actually pull the trigger.”

Home hunters Tony Speciale and Jerry Marsini learned about competition recently when they walked through the front door of a home in Kingston just as their agent got a message from the seller about a cash offer from someone else.

“If we find a house that we’re interested in, sitting on it more than a few days doesn’t seem like a good idea,” Speciale said.

The Manhattan residents, who had been looking upstate even before the pandemic, are in the process of buying a house in Kingston.

The Hudson Valley is not the only region outside New York City experiencing a bump.

Along the Jersey Shore, there are far more buyers than homes in Monmouth and Ocean counties. Homes are selling above asking price and “once a thing comes on the market, everyone is jumping on it,” said Wendy Smith, president of Monmouth Ocean Regional Realtors. On the tip of Long Island, a preservation fund financed by a real estate transfer tax in the five East End towns was up 39 percent during the first half of the year, according to state Assemblyman Fred Thiele.

The National Association of Realtors said on Wednesday existing home sales jumped 20.7 percent to a seasonally adjusted annual rate of 4.72 million units last month. That’s the biggest gain since 1968 when the NAR started tracking the series.

I think this was the event that got people off the fence.

The 30-year fixed mortgage rate is at an average of 2.98 percent, the lowest since 1971, according to data from mortgage finance agency Freddie Mac. 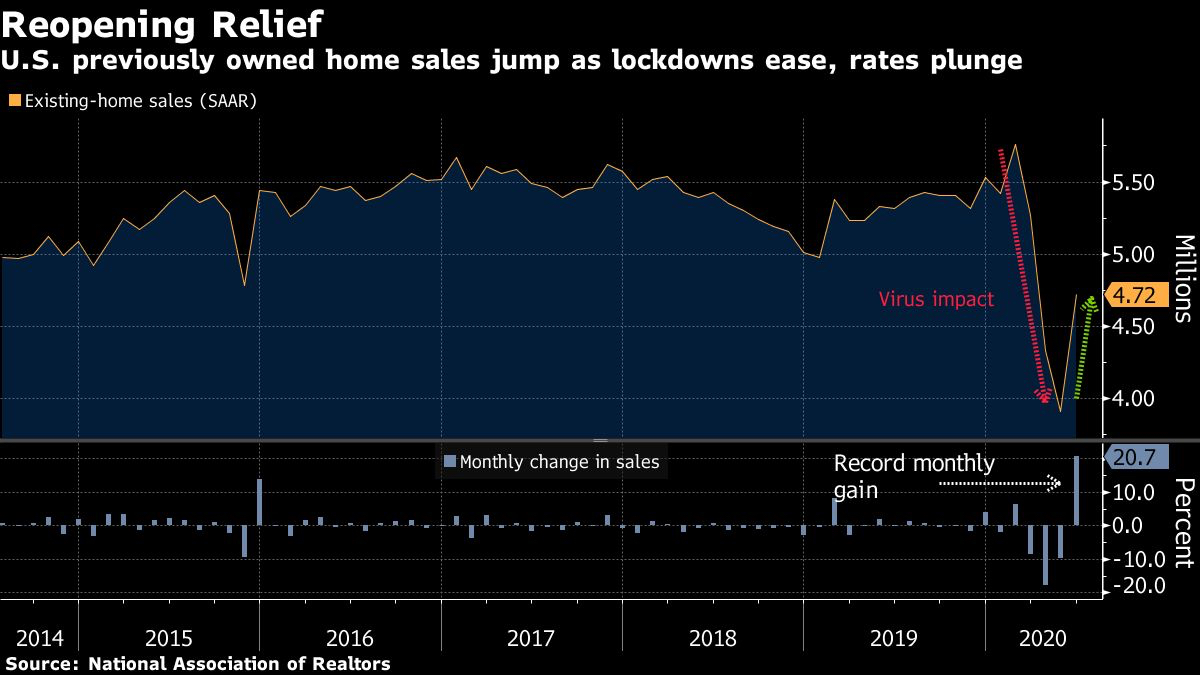 Indeed extremely low mortgage rates are helping the market, as are more expansive work-from-home policies ushered in with the pandemic.

Joyce Lilly is an acupuncturist, but she said her husband’s ability to work remotely as an IT manager was the deciding factor in the move from Riverdale in the Bronx on Tuesday, which included his daughter, a granddaughter and a dog. Cohen just retired in January and her husband is able to work as a financial tech consultant from the house.

For music and video producer Erik Braund, moving his family of four from the Upper East Side to Saugerties has been a learning curve about how to keep his production company running some 100 miles north of his Brooklyn studio. They pounced on a fixer-upper at the start of the lockdown, but are keeping their apartment.

They might head back, but not the way things are now.

“Whenever some sort of rapid testing becomes available, we’re going to reassess. We’re basically reassessing our life every single day,” he said, “So grateful that we were able to pull this off.”