The Group of 20 leading economies this weekend may have to consider expanding help for the world’s poorest countries, three months after agreeing to provide temporary debt relief, as the coronavirus pandemic continues to ravage nations.

Central bankers and finance ministers from the G-20 will hold a virtual meeting on Saturday to discuss and coordinate phased efforts to spur a global economic recovery. Looking beyond just debt relief efforts would be part of that.

The Covid-19 pandemic is now spreading faster in the Americas and Africa compared to the previous meeting in April when the bulk of infections were in Asia and Europe. The rate of infections is increasing in many countries, with debt costs crowding out health and social expenses.

“The spotlight on debt is important but we shouldn’t focus on it to the exclusion of everything else,” Anna Gelpern, a law professor at Georgetown University, said at a conference on July 9. “The objective has got to be funding essential needs in response to a public health shock. How we get there is a second-order question.” 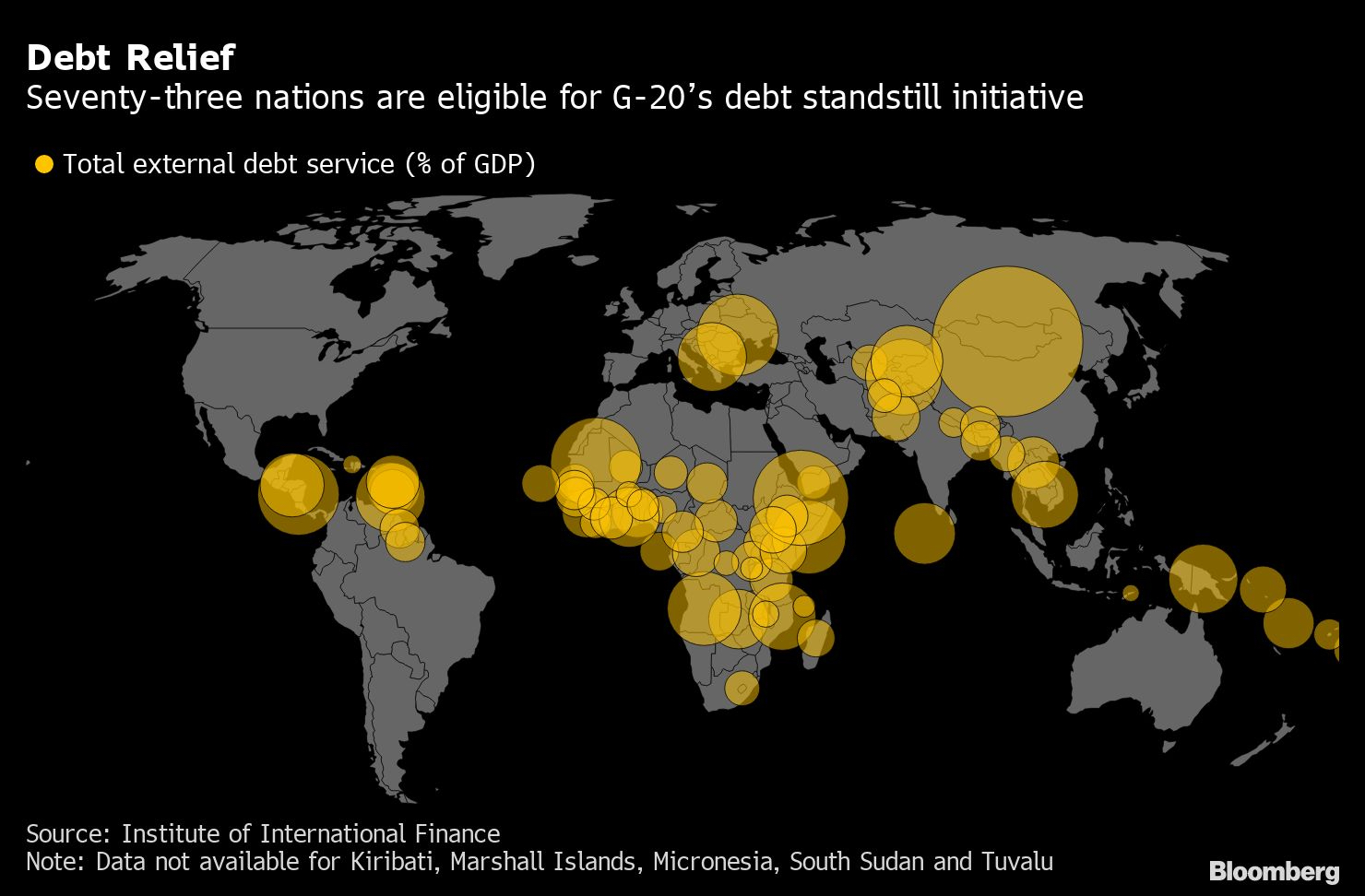 Since the G-20’s April agreement that aims to waive about $12 billion in bilateral debt payments from countries that are especially vulnerable to the pandemic, 41 of the 73 eligible nations have requested help. The Paris Club has waived $1.3 billion in repayments and the International Monetary Fund has made $100 billion available in emergency financing for low-income and emerging-market countries.

However, charities including Oxfam said the relief so far to the world’s poorest nations is “woefully inadequate.” Saturday’s discussions could touch on extending the debt pause beyond 2020 and adding middle-income countries, said Eric LeCompte of Jubilee USA Network, a nonprofit group that advocates for debt relief for smaller economies.

France’s main priorities for the meeting will be to extend the moratorium on debt service for the poorest countries to 2021 and encourage international negotiations for digital and minimum taxation, Finance Minister Bruno Le Maire said. Discussion regarding a new allocation of special drawing rights at the IMF will likely remain on the table, according to a finance ministry official.

A proposal to increase these reserve assets, which would boost the IMF’s lending power, was blocked by the U.S. at the lender’s April meeting. However, China’s central bank governor on Thursday called on the IMF to use a new issue of SDRs to help developing countries.

In a letter to the G-20 finance ministers released on Friday, a group of economists including former U.S. Treasury Secretary Larry Summers and Vera Songwe, executive secretary of the United Nations Economic Commission for Africa, urged the meeting to extend debt standstills and consider new SDR allocations. Summers is a contributor to Bloomberg News.

“It will take more than a suspension of debt service on existing bilateral claims for half a year to help the poorest countries fund the needed fiscal and health response,” said Brad Setser, senior fellow at the Council on Foreign Relations and a former economist at the U.S. Treasury Department. “There needs to be more financial flows as well.”

Private creditors have so far swerved clear of efforts to halt payments on Eurobonds, with nations wary of triggering default clauses.

Another sticking point is China which has been slow to join the debt suspension initiative. The participation of the world’s second-largest economy is key for the debt-waiver push to work, World Bank President David Malpass said last week.

“Continuing lack of clarity on which Chinese creditors will participate, coupled with resistance from private-sector creditors to voluntary participation suggest that actual relief will be much less than originally planned,” Alicia Garcia Herrero, the chief economist for Asia-Pacific at Natixis SA, said in a note.

US markets open flat amid unexpected rise in jobless claims