For TroubleMaker, a company in the southern Chinese city of Shenzhen that sits at the heart of the world’s biggest electronics market, the coronavirus pandemic has been particularly disruptive.

The firm is normally a hub for foreign startups looking to build prototypes of their upcoming products, providing a space for up to 2,000 people over the past four years to collaborate and build. The so-called “makerspace” is located next to Shenzhen’s Huaqiangbei area, a maze of shops and stalls offering nearly every kind of electronic component imaginable.

But international supply-chain disruptions, cratering overseas demand and the inability of most of its clients to return to China due to visa restrictions, have ground activity at TroubleMaker to a near halt. The firm’s troubles mirror the broader slump in the world’s second-largest economy in recent months.

“Basically, at the moment, the only new customers I’m taking on are companies that we can handle one-by-one, and that we’re sure we can service,” Henk Werner, TroubleMaker’s chief executive offer, told Al Jazeera.

Normally, about two dozen clients occupy TroubleMaker’s workshops at any one time. But now, the restrictions mean only a handful of staff and tech hopefuls in search of the next big thing are using its facilities.

China is due to release data on Thursday showing how its economy performed in the second quarter, following a historic 6.8 percent year-on-year plunge in the first three months. That was China’s first economic contraction in gross domestic product (GDP) since at least 1992, and a second negative quarterly reading would officially spell its first recession in decades.

Most analysts predict China’s economy experienced a rebound in the April-June period as lockdowns at home and abroad eased, and activity in factories, ports, shops, and restaurants slowly resumed. But with domestic consumption remaining sluggish and exports failing to recover to pre-COVID-19 levels, the bounce is expected to be weak.

And the measures the government is taking to stoke growth now could leave deeper structural scars in the economy for years to come, analysts say. A poll of economists by the Reuters news agency shows a median estimate of 2.5-percent growth in China’s GDP in the second quarter compared with the same period last year, according to data provider Refinitiv. A Bloomberg poll published last month predicts growth of 1.5 percent, all of which suggests a wide range of expectations and a relatively high degree of uncertainty.

Analysts at global banking giant HSBC are even more bearish, with a 1.2 percent projection. “The economy has gradually recovered in April and May, though the pace of the recovery still remained uneven across sectors,” HSBC’s chief China economist Qu Hongbin said in a research note sent to Al Jazeera.

China faces difficulties on several fronts. Domestically, demand for consumer goods did rise over the quarter as lockdown restrictions eased, but a resurgence of COVID-19 cases in some areas, including Beijing, has kept some shoppers wary. And waves of job losses and pay cuts from earlier in the year have dented the spending power of consumers, to whom the government has increasingly turned in recent years to stimulate growth. 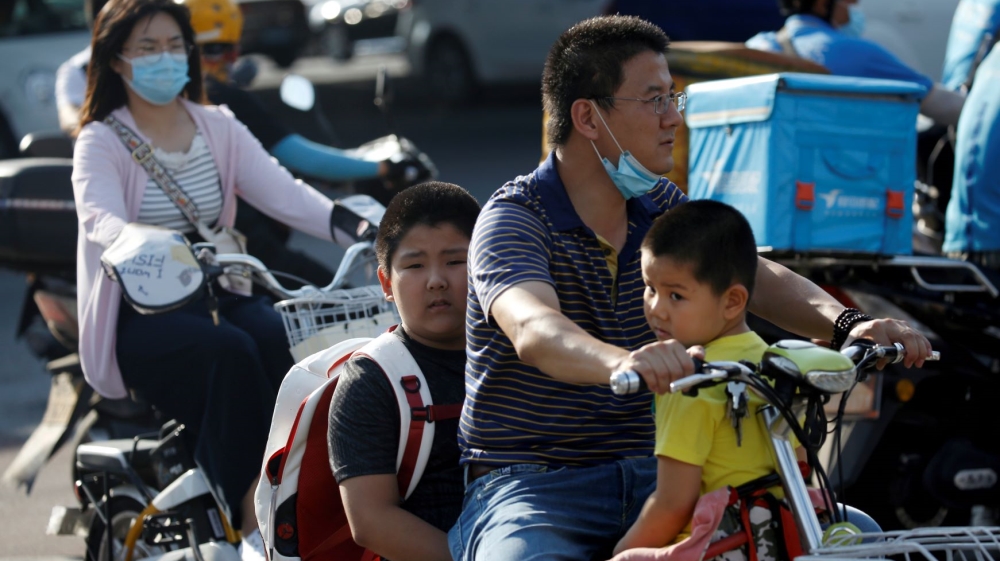 “The biggest impact [from the outbreak] has been on the demand side, particularly through consumption,” Michael Pettis, professor of finance at Peking University in Beijing, told Al Jazeera.

A study conducted by the Chengdu-based Southwestern University of Finance and Economics released in early July found that of the 5,000 consumers surveyed, 52 percent said they would spend less in May than they did in March.

Coronavirus cases in some of China’s major trade partners, including the United States, are soaring, even though many virus-control restrictions are being lifted. But analysts see demand for China’s exports remaining weak in the immediate future.

China customs data released in early June showed a 3.3 percent decline in exports compared with the same month the year before, with imports dropping a staggering 16.7 percent, the steepest drop since early 2016.

“The pain point of the economy are small manufacturers, and they usually produce for small exporters,” Iris Pang, chief economist for Greater China at Dutch bank ING said in a research note. “These two groups are expected to face an increased chance of a shutdown. Even though the People’s Bank of China set up an innovative re-lending programme for [small and medium-sized enterprises], they might not be willing to borrow if they can’t see orders coming,” Pang added.

All of this is happening against a backdrop of worsening political tensions between China, the US, and other trading partners. A new security law imposed on Hong Kong by Beijing has resulted in US President Donald Trump revoking Hong Kong’s special trading status in a retaliatory move against the Chinese government.

Meanwhile, one of China’s most important technology companies, telecommunications equipment giant Huawei, is being shut out of key markets in the US and, most recently, the United Kingdom, as they roll out their next-generation 5G mobile networks. Other US allies may be forced to follow suit. To stimulate growth back to pre-coronavirus rates, the Chinese government has reverted to an old model: spending big on infrastructure and other large-scale projects.

“The problem is that when you look at most of the measures Beijing is implementing, they are mostly supply-side – cutting corporate taxes, getting banks to lend more money, strengthening infrastructure and logistics – very little of it is on the demand side,” Peking University’s Pettis said.

Premier Li Keqiang said in a statement at a State Council meeting focused on economic recovery on July 8 that if the government can deliver on tax, fee and other fiscal support measures as well as infrastructure spending policies, then “businesses can get through this trying time”, according to state-run media reports.

“Beijing would have a hard time getting its beleaguered consumers to spend, especially the middle- and high-income urbanites. But the [Chinese Communist] Party is determined to do ‘whatever it takes’ to stabilise the economy and employment. So it’s back to old-style debt-fuelled investment-led growth!” Diana Choyleva, chief economist at research firm Enodo Economics, said in a research note published on the Smartkarma platform.

The key focus going forward, according to Li, will be on removing barriers to doing business and creating a “market-oriented, law-based, international business environment”.

Developing infrastructure in China’s western regions is at the top of the government’s agenda, partly to alleviate the concerns of unemployed migrant workers who were forced to return to their villages when they lost their city jobs earlier in the year. Li’s visit to Guizhou province during the first week of July, when he stressed the importance of job creation programmes to local governments, highlighted Beijing’s priorities.

The government is also doing everything it can to reach a key goal of eliminating the worst rural poverty by the end of 2020. In mid-June, China’s National Bureau of Statistics confirmed that more than 40 percent of the population gets by on only approximately $140 per month, a controversial statistic floated by Li at annual National People’s Congress meetings in May. But all these measures come with potential long-term risks.

One consequence of its stimulus measures has been a surge in China’s stock market, which continues to be flooded with new investors, gambling on hopes of a strong recovery. The Shanghai Composite stock index of leading mainland companies has jumped more than 28 percent from its trough in March.

The increased interest in stocks has led to a rise in the number of people borrowing money to get in on the action. China’s securities regulator was forced to issue a notice against so-called margin trading to more than 250 unlicensed traders. Similar practices led to a boom, then bust, in asset prices between 2014 and 2015.

Meanwhile, bank lending increased 13.2 percent in June, which has been seen as a further sign of economic recovery. But it has also raised question marks over the sustainability of all this additional debt.

A recent report by the Fitch ratings agency estimates that general consolidated government debt will increase to 11.2 percent of GDP, up from 4.9 percent last year, indicating “a much larger degree of fiscal deterioration” than seen in the government’s headline deficit figures.

In early July, Guo Shuqing, chairman of the China Banking and Insurance Regulatory Commission, urged banking and financial institutions to tighten up their practices after a series of bank runs in provinces like Hebei and Shanxi, as well as problems at investment institutions in other provinces.

A concern for Peking University’s Pettis is the continued growth of China’s debt to GDP ratio, which likely now stands at about 279 percent, and which he believes will eventually lead to some kind of reckoning. “There’s never been a case in history where a country has that high of a ratio without it ending in either a crisis, which I think is very unlikely in China, or a long period of stagnation, which I think is much more likely,” Pettis said. “Once the debt can no longer rise, then growth rates will drop very, very sharply and they will stay down for a long time,” he said.

But even with all the challenges, some entrepreneurs are still finding opportunities to expand, tapping into China’s long-held promise of growth for those willing to take a bet on its enormous domestic market.

Duncan Turner, managing director of the HAX startup accelerator in Shenzhen – stuck in Hong Kong throughout most of the outbreak – said his company, like TroubleMaker, is also being forced to pivot from in-person programmes to a more virtual business model. But despite this, he is still finding demand for his services. “We normally invest in about 36 teams per year, and we actually did quite a lot in the first quarter, which means we’ll end up with around 30 teams by the end of the year,” Turner told Al Jazeera.

Anything related to digital health, childcare and education, automation, working from home and contactless delivery services are all seeing major interest in the startup world, he said. The key, Turner says, is speed, and being to adapt to rapidly changing circumstances.

That sort of nimbleness is something even the Chinese government will have to embrace as the global economy shifts in ways that could not have been foreseen just months ago.