Argentina was facing a third year of recession in 2020 even before the coronavirus hit. Now with the pandemic’s economic shock, some analysts foresee a record contraction in the crisis-prone country.

One of the most pessimistic estimates is from Marcos Buscaglia, co-founder of Buenos Aires-based consulting firm Alberdi Partners and former chief Latin America economist at Bank of America Corp, who sees activity shrinking 13%.

Yet, forecasts for a near double-digit decline aren’t outliers. The OECD forecasts Argentina’s economy will shrink 10% this year and Goldman Sachs Group Inc.’s Tiago Severo sees a 9.3% drop. A year-end result in line with those estimates would rival the economy’s record plunge of 2002, when gross domestic product fell 10.8%, according to data compiled by University of Buenos Aires academics Ariel Coremberg, Daniel Heymann and Pablo Gerchunoff. 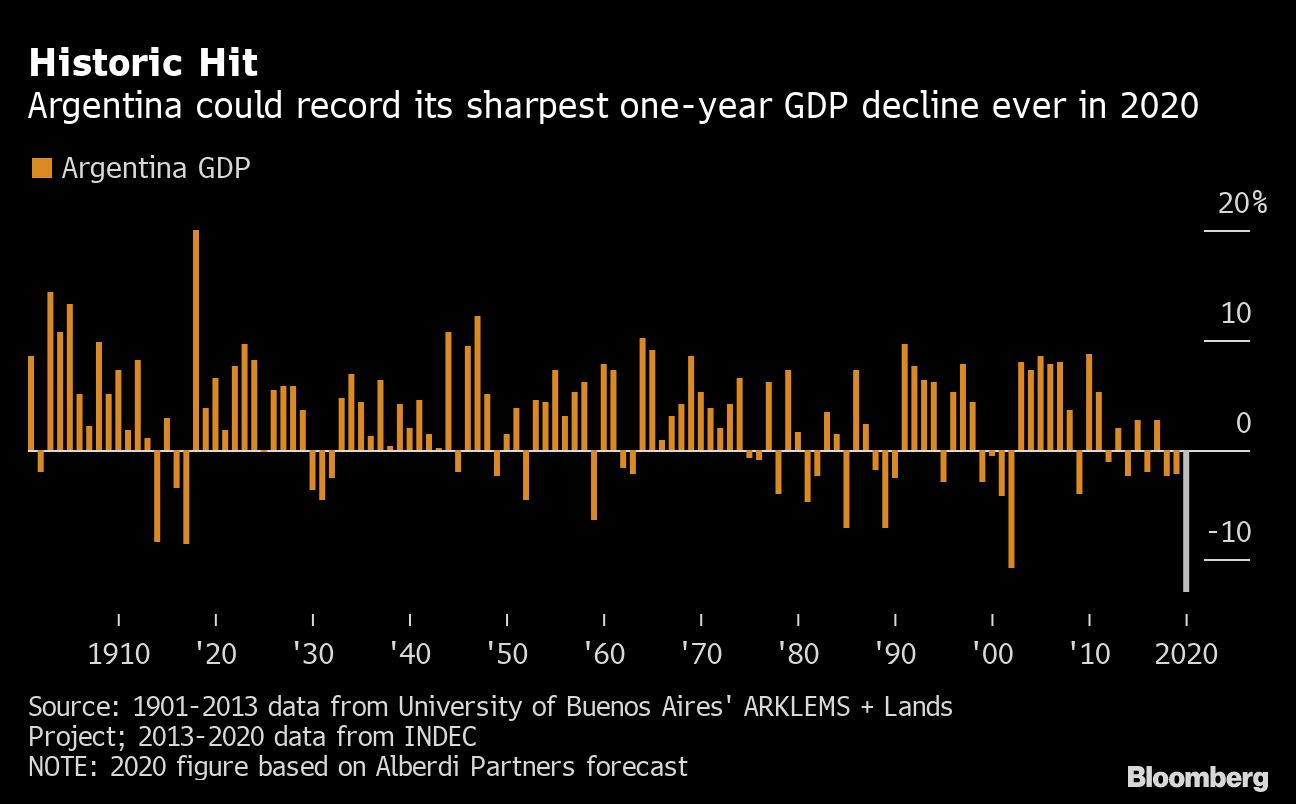 Argentina, a land of chronic financial turmoil, has been in the throes of a currency crisis since 2018, with the capital controls imposed last year only just limiting the volatility created by political turbulence and inflation hovering around 50%. The pandemic prompted the government to order a strict lockdown on March 20 that some observers say the new administration has no clear strategy for lifting.

“This is going to be the worst, this year is completely lost,” said Gerardo della Paolera, an Argentine economic historian. The government “went into quarantine and they don’t know how to get out, and that lack of conviction about to how to get out produces even more economic costs.”

The economy contracted 4.8% in the first quarter from the previous three months, returning to levels last seen at end-2009, while unemployment rose to 10.4% in the same period, according to government data published Tuesday. As in other countries, the full impact of the virus lockdown will only be seen during the second-quarter.

By other indicators, Argentina’s decline is already of historic proportions. Looking at seasonally adjusted monthly data, Argentina’s current downturn is sharper than the economic collapse between 1998 and 2002, when the country’s currency peg system collapsed.

Back then, from the peak of activity in June 1998 to bottoming out in March 2002, the economy contracted 21%. In this current crisis, the economy has already declined 25% since March 2018 through April, according to estimates by Argentine consulting firm Elypsis.

The Economy Ministry didn’t reply to a comment request. 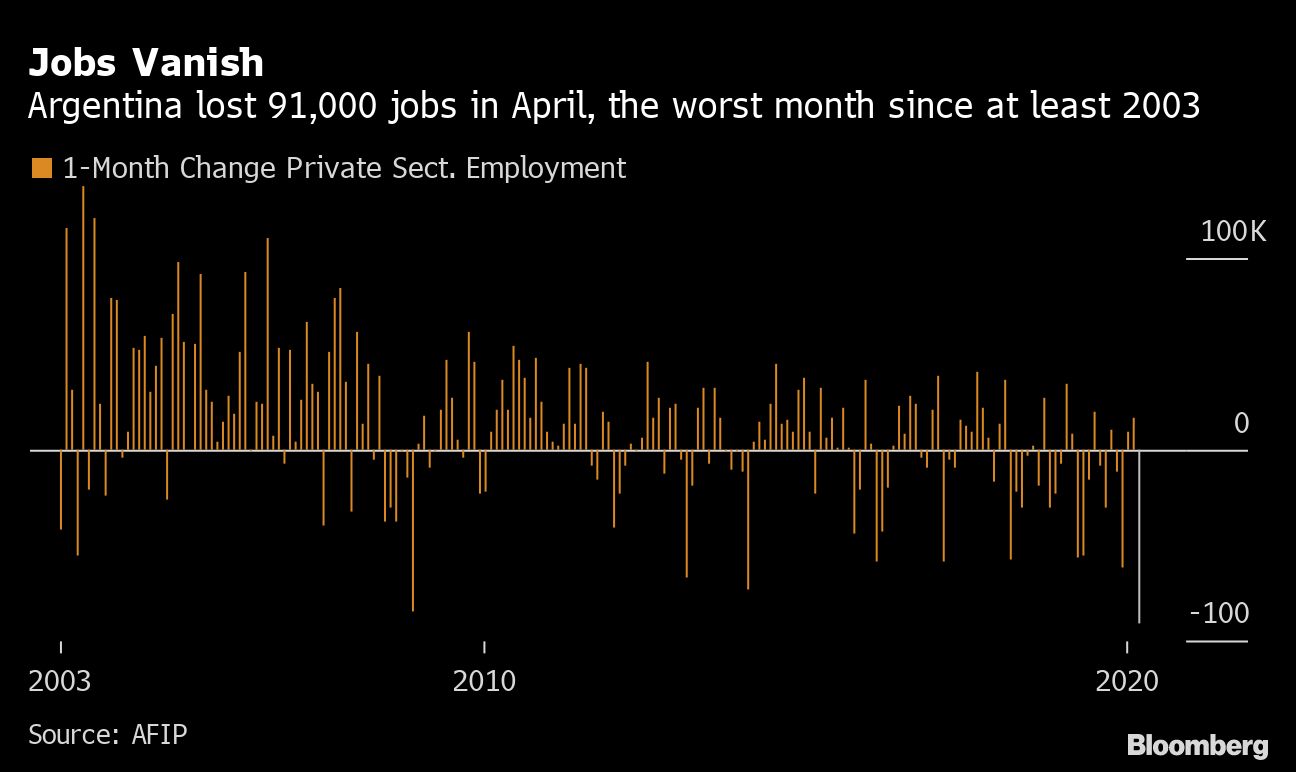 Unemployment is already on the rise. Argentina’s private sector lost 91,000 jobs in April, the worst one-month collapse since at least 2003. But even that doesn’t capture the full damage. President Alberto Fernandez’s government banned companies from laying off employees. With the country in quarantine and companies losing revenue, the share of firms suspending workers has soared. 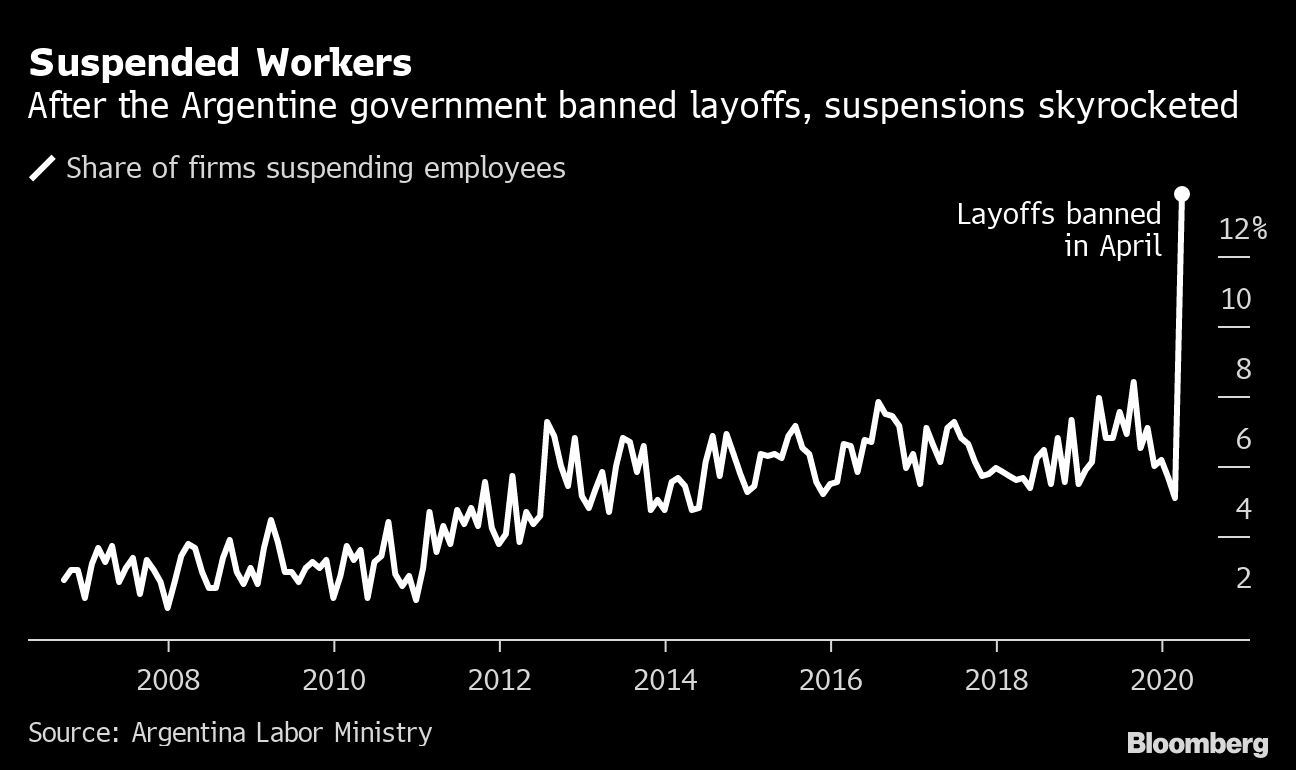 Beyond that, Fernandez recently announced his government would expropriate soy exporter Vicentin, a move met with protests and economists warning that such action would deter investment, a key ingredient for growth. LATAM airlines, a Santiago-based carrier, shuttered domestic operations last week after 15 years in Argentina, citing an array of operating problems, including a 30% tax on purchases abroad.

Fernandez’s government has also tightened currency controls that make it difficult to exchange pesos for dollars. With the country again in default since last month, the administration’s efforts to restructure $65 billion in debt with creditors have stalled, elevating uncertainty about the economy’s road ahead.