Beirut, Lebanon – Angry Lebanese protesters blocked roads across the country with burning tyres, debris and their vehicles, incensed over the local currency’s depreciation by more than 25 percent in just two days.

The demonstrations from northern Akkar and Tripoli to central Zouk, the eastern Bekaa Valley, Beirut and southern Tyre and Nabatieh on Thursday were some of the most widespread in months of upheaval over a calamitous economic and financial crisis.

Protesters set ablaze a branch of the Central Bank, vandalised several private banks and clashed with security forces in several areas. At least 41 people were injured in Tripoli alone, according to the Lebanese Red Cross.

“I’m really pissed off, that’s all. If politicians think they can burn our hearts like this the fire is going to reach them too,” unemployed computer engineer Ali Qassem, 26, told Al Jazeera after pouring fuel onto smouldering tyres on a main Beirut thoroughfare.

Tens of thousands of Lebanese have lost jobs in the past six months and hundreds of businesses have shuttered as a dollar shortage led the Lebanese pound to slide from 1,500 to $1 last summer – where it was pegged for 23 years – to roughly 4,000 for each US dollar last month.

But the slide turned into a freefall between Wednesday and Thursday when the pound plummeted to roughly 5,000 to $1 on black markets, which have become a main source of hard currency. There was widespread speculation the rate hit 6,000 or even 7,000 pounds to the dollar, though most markets stopped trading.

Prime Minister Hassan Diab cancelled all meetings scheduled for Friday to hold an emergency cabinet session at 9:30am and another at 3pm at the presidential palace to be headed by President Michel Aoun.

The pound’s collapse is the perhaps the biggest challenge yet for Diab’s young cabinet, which gained confidence in February after former prime minister Saad Hariri’s government was toppled by an unprecedented October uprising that had the country’s economic crisis at its core.

Economy Minister Raoul Nehme told Al Jazeera that there was “disinformation” being circulated about the exchange rate on social media and said he was investigating possible currency manipulation.

“I don’t understand how the exchange rate increased by so much in two days,” he said.

Many protesters have pitted blame on Central Bank governor Riad Salameh, nominally in charge of  keeping the currency stable. But they have also called on the government to resign.

“If people want reform between dawn and dusk, that’s not going to work, and if someone thinks they can do a better job then please come forward,” Nehme said.

‘Everyone paying the price’

When protesters set a large fire in Beirut’s Riad al-Solh Square, which lies at the foot of a grand Ottoman-era building that serves as the seat of government, firefighters did not intervene to extinguish it.

It later became clear why: Civil Defence told local news channel LBCI they had run out of diesel to fuel their firetrucks.

Basic imports such as fuel have been hit hard by the currency crisis, making already-weak state services increasingly feeble.

A half-dozen or so police officers with Lebanon’s Internal Security Forces observed the scene unfolding in front of them in the square.

“Why do you destroy shops and things and attack us security forces – do you think we’re happy? Go and f****** break that wall or go to the politicians’ houses,” one police officer told Al Jazeera, referring to a large concrete barrier separating protesters from the seat of government.

“In the end we are with you and we want the country to change. Don’t you dare think we’re happy. My salary is now worth $130,” the officer said.

The currency’s spectacular fall seems to have pushed many Lebanese to put common interests above their differences.

Large convoys of men on motorbikes from Shia-majority areas of southern Beirut joined the demonstrations on Thursday, though they have clashed with protesters many times before – including at a protest on Saturday.

Some chanted sectarian insults, leading to brief clashes in areas that were formerly front lines during the country’s devastating 15-year civil war.

“We are Shia, and Sunnis and Christian are our brothers,” Hisham Houri, 39, told Al Jazeera, perched on a moped with his fiancee behind him just a few metres from a pile of burning tyres.

The blaze sent thick black smoke into the sky towards an iconic blue-domed mosque and church in downtown Beirut.

“Politicians play on these sectarian issues and sometimes succeed, but in the end, they’ll fail because all the people have been hurt,” he said. “The dollar isn’t just worth 6,000 for Shias or for Sunnis, everyone is paying that price.” 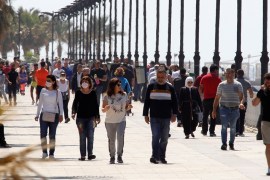 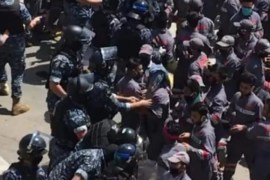 Waste-sector workers walked off the job over a month ago in pay dispute in economically ravaged nation. 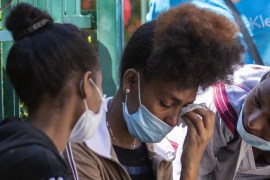 While the move was praised by activists, it has not stopped the flow of Ethiopian workers deposited outside consulate.