In New York City, you can take a culinary tour around the globe without ever leaving the metropolis. Along the way, you will be seduced by flavours and dumbfounded by a salty fact: more than a million of the city’s people – including many who are responsible for its magnificent cuisine – do not know if they can afford to eat today. Edward Summers used to be one of them.

“I grew up in the Bronx when the Bronx was burning. I came from a relatively big family. I am one of 12. There was never enough money and or food around,” Summers told Al Jazeera. He still lives in the city’s poorest borough with his young son; he fears the coronavirus is ushering in a historic wave of hunger, which he is fighting to stop by trying to change the way emergency food supply chains operate.

“Some people call it ‘Let’s hack the system,’ in the way we provide relief efforts during pandemics or crises. Sure, we are trying to hack it. We are trying to maintain an economic system to support the borough.”

Summers is the executive director of the Bronx Private Industry Council (PIC), and part of a global wave of thinkers racing to get food to some of the more than 100 million people the World Food Programme predicts will be pushed into food insecurity by COVID-19’s economic shock. 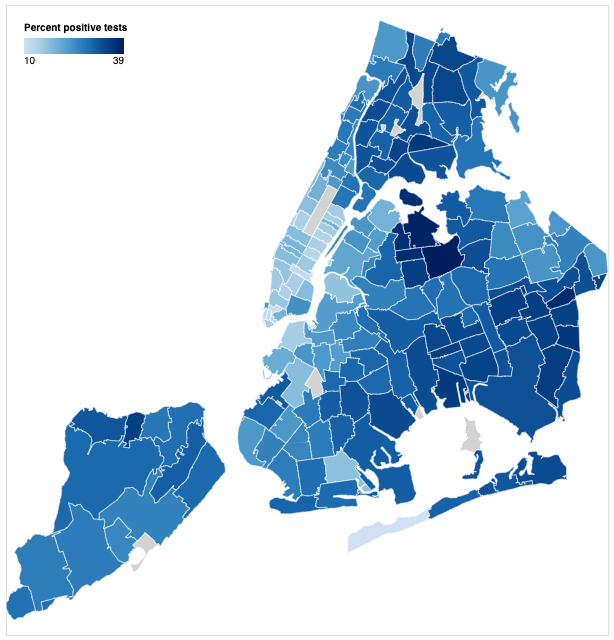 The Bronx: stung by the virus

As in many parts of the world, the coronavirus’s path of contagion follows the city’s geography of wealth and poverty. On its epidemiological maps, New York City’s disease trackers painted much of the Bronx – its poorest county – a deep blue, indicating super concentrations of infections: In some census data, roughly 50 percent of COVID-19 tests came back positive. Manhattan, which has a high concentration of high net worth people, had far fewer positive test results.

‘It does boil down to the Bronx being this ‘essential services’ borough,” Summers said. Key characteristics of the borough’s labour force also make its members and their families particularly likely to lack sufficient access to food during this pandemic.

City figures show the Bronx has a high concentration of frontline workers: people whose jobs it is to man grocery and drug stores, run the public transit system, clean the city and care for its old, young and sick. For many Bronxites, earning money means exposing yourself to infection.

“They are the most essential workers right now, and the most disposable,” University of Texas at Austin Professor Raj Patel told Al Jazeera.

Many people in the Bronx hold low-paying service jobs in restaurants and other sectors of the labour force hardest hit by virus-induced lockdowns. Job losses in the borough have skyrocketed since February. Its April unemployment rate rose to 16.5 percent, far above levels for Manhattan and the nation, according to the state’s labor department. The resulting lack of income combined with higher food prices brought on by virus-related supply chain disruptions make many people in the Bronx more susceptible to food insecurity.

“Their hunger should matter right now because you depend on them,” Patel, whose research focuses on the political economy of the world food system, said. “The worst is absolutely yet to come. We are still seeing levels of unemployment rising.”

“Often time when we have a national crisis, foundations come in and they work with factories that mass-produce meals,” Summers said, recalling his own childhood. “We would go to our local community centre or a church and they would have these big blocks of cheese and then these bologna sandwiches. We always threw away the baloney and ate the cheese as children in the South Bronx.”

He says his childhood experience underscores inefficiencies in emergency food responses that do not consider the diverse cultures of the recipients of food aid. His hack involves focusing on the type of food, its preparation, distribution networks and the food chain’s cash flow.

“Our response to the pandemic was to activate the local industry. This is not just about food relief; it is about economic development. It is about keeping people employed and keeping resources in the community.”

With restaurants closed and unemployment among service workers rising, Summers, his coalition and strategic partners formed the Bronx Community Relief Effort.  Together. they work with food distributors to get restaurants discounted supplies. Those restaurants used raw food to prepare culturally specific meals for a community composed mainly of immigrants and people of colour.

“We [also] worked with companies that had employees that were going to get paid during this time of COVID-19 [because of special government business loans], but were idle … to repurpose their staff [so that they] along with community-based organisations [could] deliver about 16,000 meals a day and free groceries.”

World Central Kitchen (WCK), which partnered with the Bronx Industry Council, operates a similar model in more than a dozen US states. WCK tells Al Jazeera it is working with more than 1,200 eateries in North America and since March has funnelled more than $15m into local restaurants that prepare food for people in need.

“Diversity is really important in terms of the types of meals we serve. So [for example] we have ‘Accra restaurant.’ Accra is the capital of Ghana. They are serving 250 people who identify as African. [To minimise waste] it is critically important to be culturally sensitive to the needs of the community,” Summers said.

The  International Panel of Experts on Sustainable Food Systems, IPES-Food, an initiative that examines ways to reform the current food systems, says COVID-19 is causing an upsurge in food activism with a focus on making both emergency and medium-term food supply chains more resilient to future shocks. However, it is still too early to tell which approach is sustainable.

“Hunger is not something that gets solved by food in the medium term. Hunger is a symptom of poverty and you can’t fix poverty with a box of vegetables,” said Patel, who is also an IPES-Food Member. “You have to fix poverty with a series of interventions that range from access to assets to good solid work that’s well-paid and that provides stable income, to healthcare and to education, and care services for children and elders.”

And while Summers agrees with Patel, he is firmly focused on the immediate hunger he sees around him and what impact it could have on families like his in the Bronx and beyond.

“The Bronx is more representative of what the world looks like. It’s a place that is very diverse and a place that has suffered because of COVID-19.”