Emerging markets have rebounded over the past six weeks amid growing optimism they can ease lockdown restrictions and return their economies to normal. There’s still a long way to go.

Countries that are in the vanguard of restoring activity have been rewarded with stocks in China and South Korea outperforming their peers this year. The focus turns to which economies have lagged behind, such as Indonesia and Brazil, but may now be able to catch up in loosening restrictions put in place to curb the coronavirus pandemic.

“Investors are seeing light at the end of the lockdown tunnel,” said Stephen Innes, chief global market strategist at AxiCorp Ltd. in Bangkok. “But people will be selective in buying assets, and they are looking for a convincing roadmap to exit lockdowns. Countries that are able to open up economies, while reducing the risk of another wave of infections will outperform.” 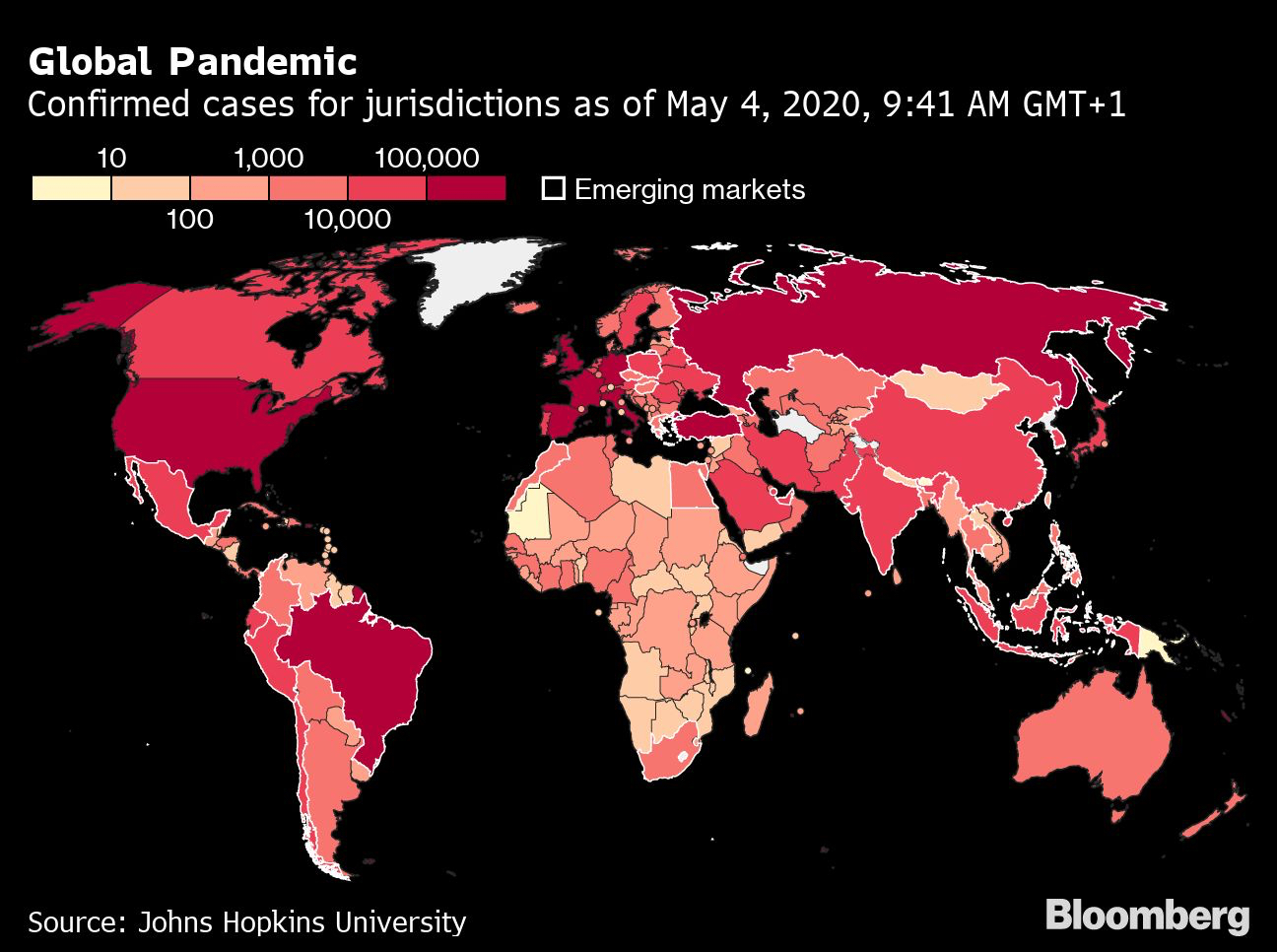 Emerging-market currencies and stocks gained on Tuesday as more economies moved toward easing their lockdowns. Czech Republic is reopening restaurants and shops and Nigeria partially lifted restrictions in Lagos and Abuja yesterday.

Here are the latest plans toward ending the lockdowns in some of the major emerging markets:

India is set to end its nationwide lockdown in about two weeks. Some restrictions have already been eased in urban areas that have reported no new infections. They include allowing industrial establishments and special economic zones to operate, as well as manufacturing of essential goods such as drugs and pharmaceuticals.

The government relaxed some measures on April 20 to allow farmers and some industries to resume operations in rural areas and in districts that were free of infections. Small neighborhood stores have also been allowed to reopen. The rupee has dropped about 5% this year, though it has pared losses from a record low set in April.

Indonesia, which refrained from putting in place a nationwide lockdown, expects a return to normal life in July. A partial lockdown in the capital Jakarta has been extended until May 22, while more cities and towns have also adopted social distancing measures. The rupiah has been the worst-performing Asian currency this year, losing about 8%, while the stock benchmark has slumped more than 25%.

Thailand, whose currency is the second worst in Asia this year, is preparing to restart businesses nationwide, with a state of emergency set to end on May 31. The easing of restrictions will take place in four stages and start with low-risk activities. More details will be announced in due course, the government said late last month.

The Philippines has outlined a gradual reopening of its economy that may be implemented after a lockdown on key economic centers ends in mid-May. Construction and manufacturing will be allowed, as well as real estate and insurance activities. Restrictions in some provinces have been eased from May 1. Philippine stocks have the biggest losses in Asia this year after Indonesia’s.

South Africa, whose currency has tumbled almost 24% this year, eased some restrictions from May 1 as it plans a limited return of its workforce into the economy. Industries including mining and automotive manufacturing resumed operations, subject to strict precautions, while freight rail services also restarted.

Turkey is deliberating restarting its economy with the resumption of some domestic flights as early as mid-May. Other steps that are being considered include resuming rail transportation and reopening schools. The government has placed 31 cities, including Istanbul, on lockdown during weekends and national holidays. The lira has dropped in each of the past seven months, losing about 20% since the end of September.

Russia is preparing a plan to gradually lift restrictions as part of its lockdown, which is set to end on May 11. Easing the measures against the epidemic won’t happen all at once, President Vladimir Putin has said. The ruble has tumbled about 17% this year, though part of its losses are due to the slump in oil prices.

Poland reopened shopping centers, hotels and kindergartens starting Monday, ahead of a presidential election this month. Some restrictions were eased in April, including allowing more people to be in grocery stores and walking in parks and forests. The zloty has weakened 9% in 2020.

Dubai partially restored commercial and transport activities in late April. The emirate’s malls, known for their ski slopes and dancing fountains, reopened with strict rules, including limiting the number of visitors to 30% of capacity. It also hopes to reopen for tourists at the beginning of July, after halting most arrivals in March.

Saudi Arabia partially lifted a 24-hour curfew in almost all the regions, and allowed resumption of some commercial and economic activities.

Brazil’s biggest states are planning to ease restrictions, with Sao Paulo, the epicenter of the outbreak, considering a gradual reopening of productive sectors after the quarantine ends on May 11. Seven states and the Federal District have already started easing their quarantine. A nationwide lockdown was never imposed and President Jair Bolsonaro has pressured state governors to ease restrictions to lessen the impact on the economy. The real has tumbled almost 30% this year, the worst-performing currency in the world.

Mexico did not implement a nationwide lockdown. While the government had recommended companies shut down, President Andres Manuel Lopez Obrador has said businesses that remained open won’t be penalized.

Under the guidelines, only essential factories can operate, though there are few details given on what constitutes an essential product. Lopez Obrador has said that he’s in talks with the U.S. and Canada to begin reopening factories essential to the supply chain, but has yet to announce any concrete measures.

Argentina’s nationwide lockdown, currently set to end on May 10, will probably be extended. Smaller cities may return to normal activities sooner if they meet five requirements, such as restricting movement to just half of their population at any given time. The peso has dropped about 10% this year, but that still makes it one of the stronger performers in Latin America.