Remittances to Mexico reached a record high in March, surprising analysts who were expecting a decline, as workers in the U.S. rush to send savings back home amid a worsening economic outlook.

Money sent to Mexico by immigrants working outside the country jumped 36% last month to a record $4.02 billion, the central bank said on its website Monday. Analysts were forecasting remittances to fall in annual terms to $2.75 billion. 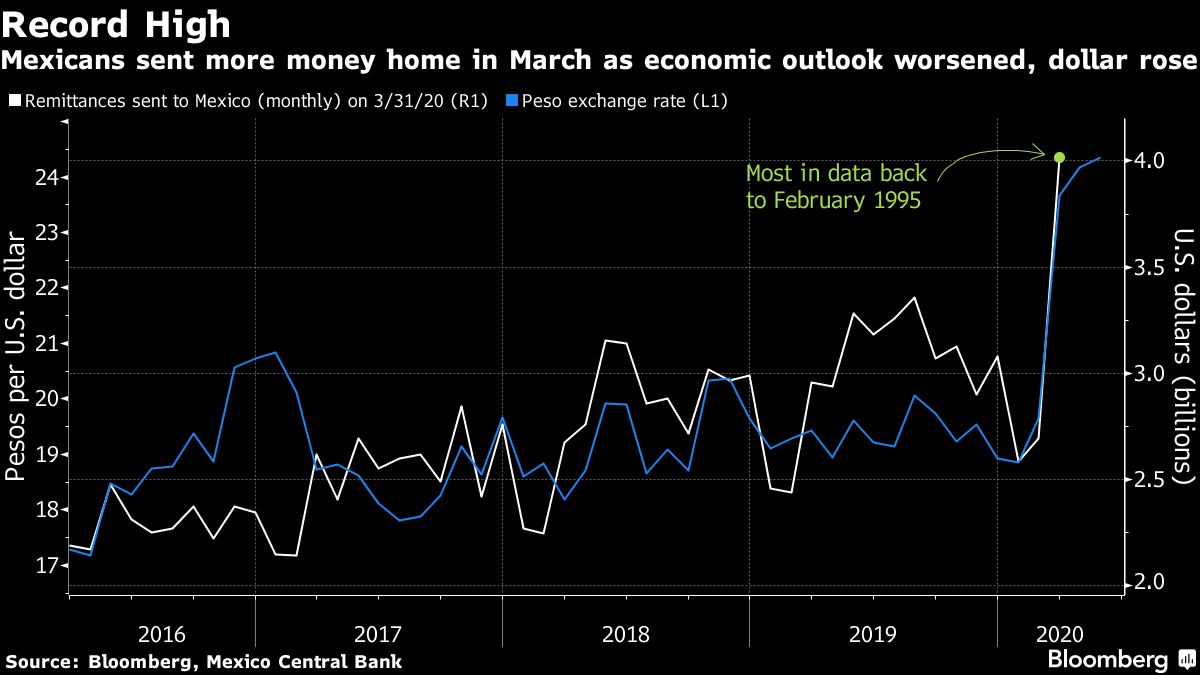 This year’s 22% decline in the value of the Mexican currency compared to the dollar and tougher immigration rules that may increase the deportation of Mexican workers in the U.S. help explain the sudden remittance increase. U.S. President Donald Trump said in a tweet Monday that the border with Mexico “is very tight” and that a wall between both countries is “rapidly” being built.

“Mexicans are taking advantage of the cheap peso to send some savings back home,” said Barclays economist Marco Oviedo. “They are rushing to secure the savings before they need to go back to Mexico due to more labor risks and unemployment amid the pandemic as well as potential deportation.”

The peso dropped 17% in March, the worst performance against the dollar among the world’s most traded currencies.

The World Bank sees global remittance flows falling 20% this year as the coronavirus pandemic drags the economy through a recession, increasing unemployment and deepening hardship for families in developing nations. Mexico’s gross domestic product is poised to contract 7.3% this year, which would be its deepest recession in decades, according to a poll of economists surveyed by the central bank in April.

The average remittance transaction amounted to $378 in March compared to $320 a year ago, the central bank said.

Separately, leading indicators released Monday show a broad contraction of the Mexican economy during April. Both the manufacturing and the non-manufacturing indexes published by the Mexican Institute of Finance Executives slumped to a record low last month, even if performing better than expected by economists.