The International Monetary Fund isn’t backing away from its view that Qatar could pull off a budget feat only a handful of nations might accomplish this year.

In the IMF’s assessment, the world’s biggest exporter of liquefied natural gas is on track for another year in the black, with a surplus that the fund says will reach just above 5% of economic output — a level three other countries may exceed in 2020.

By comparison, S&P Global Ratings last week forecast that Qatar will record a shortfall averaging about 5% of gross domestic product during 2020-2023. Given the slump in energy prices and the rising costs of the pandemic, most of Qatar’s neighbors could see fiscal deficits in double digits this year. 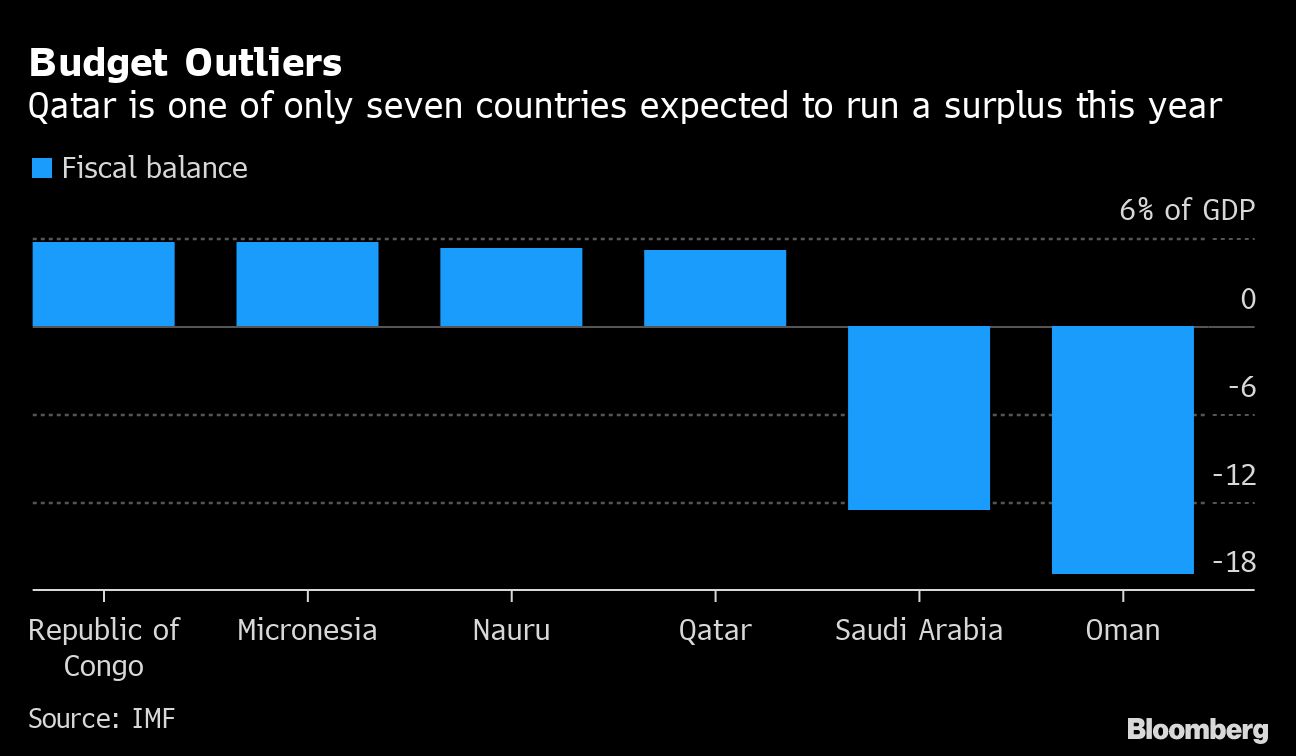 As it wraps up projects ahead of the soccer World Cup in 2022, Qatar is scaling back capital spending without sustaining too much damage yet to its revenue, according to Ali Al-Eyd, the IMF’s mission chief in the country. It’s an even more upbeat outlook than when the government began the year with a plan to run a slight surplus on the assumption that oil will average $55 a barrel, or nearly double its current level.

Much of Qatar’s stimulus response to the crisis has so far been “heavily liquidity-based,” with smaller commitments from the budget, according to Al-Eyd. And unlike other Gulf nations that depend on oil, Qatar is more reliant on revenue from gas, benefiting from the longer-term nature of LNG contracts.

The IMF projects its LNG production will be only slightly lower than last year’s output. It has “a fairly decent revenue stream coming in this year,” said Al-Eyd.

“They reduce their expenditure and they largely sustain the revenue,” he said. “The revenue impact of lower oil prices will be felt more next year.” 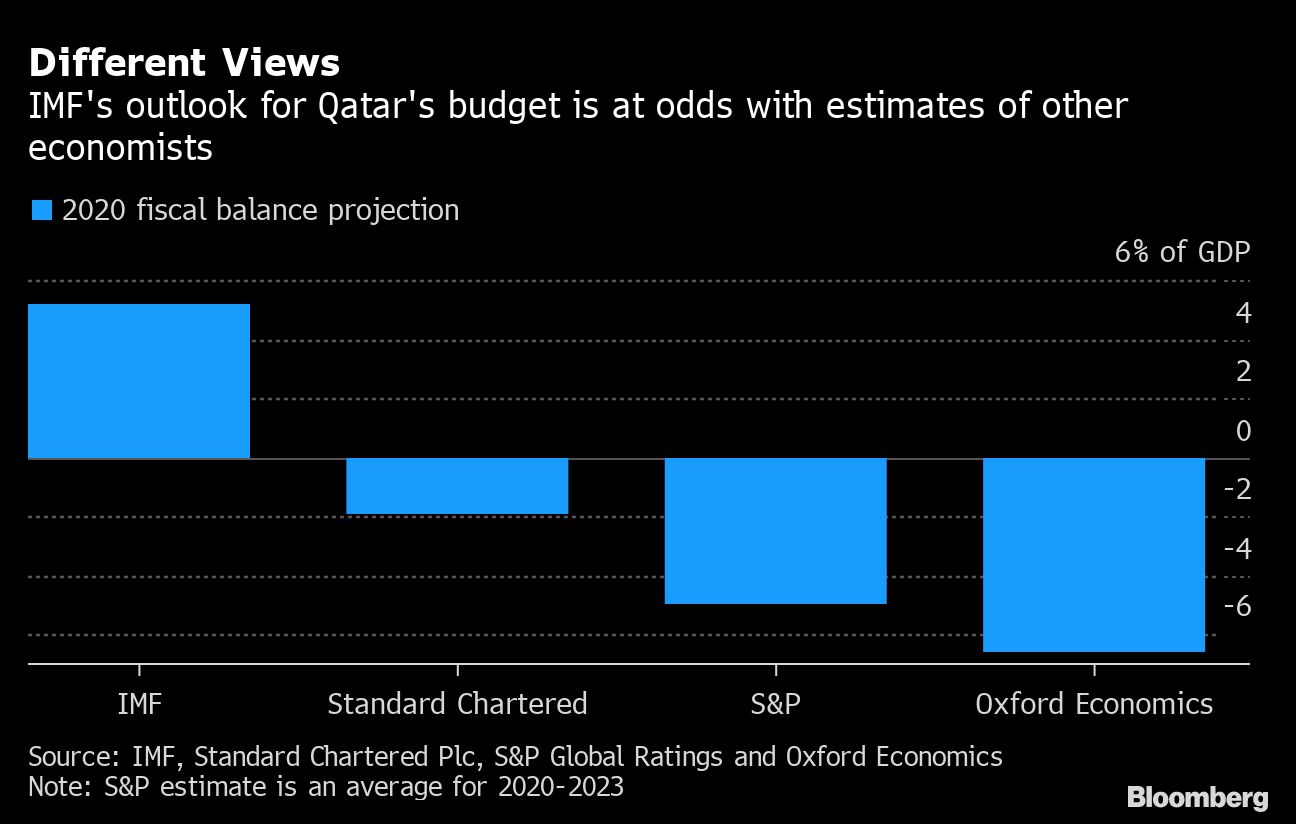 The future course of the virus outbreak could be the biggest unknown for Qatar’s finances, especially as it struggles to slow the rise of new cases. The IMF’s forecasts didn’t factor in “a possible large amount of additional fiscal spending on health,” and it’s likely that the steps announced since late March could result in bigger-than-estimated outlays unless the government offsets them with expenditure cuts, Al-Eyd said.

Qatar reported 1,103 new cases of the virus on Monday, slightly less than a day earlier, taking the total to 23,623, with 14 fatalities. Last week, the nation had its biggest daily jump in the number of infections.

The outlook for energy prices is another worry. Qatar’s government revenue has yet to recover to a level it reached seven years ago, before the last oil crash, after slumping slightly over 23% in 2015 and more than 30% in 2016, according to IMF data.

“Of course, the longer the situation were to persist, LNG prices follow oil prices, which would have a risk on the outlook,” Al-Eyd said. “If the global recovery were to be delayed, then that of course would be another risk for that outlook.”

Qatar’s economy has shown resilience before, enduring almost three years of regional isolation after neighbors led by Saudi Arabia severed diplomatic and trade ties. Qatar has grown more self-sufficient since then, rebuilding its reserves and bringing the oil price it needs to balance the budget to the lowest in the Gulf.

Still, the IMF’s confidence in Qatar’s fiscal performance stands in stark contrast to the forecasts of many analysts. S&P, which last week affirmed Qatar at its fourth-highest grade with a stable outlook, is warning that the global coronavirus pandemic and low hydrocarbon prices are enough of a shock to push the government’s fiscal balance into deficit. 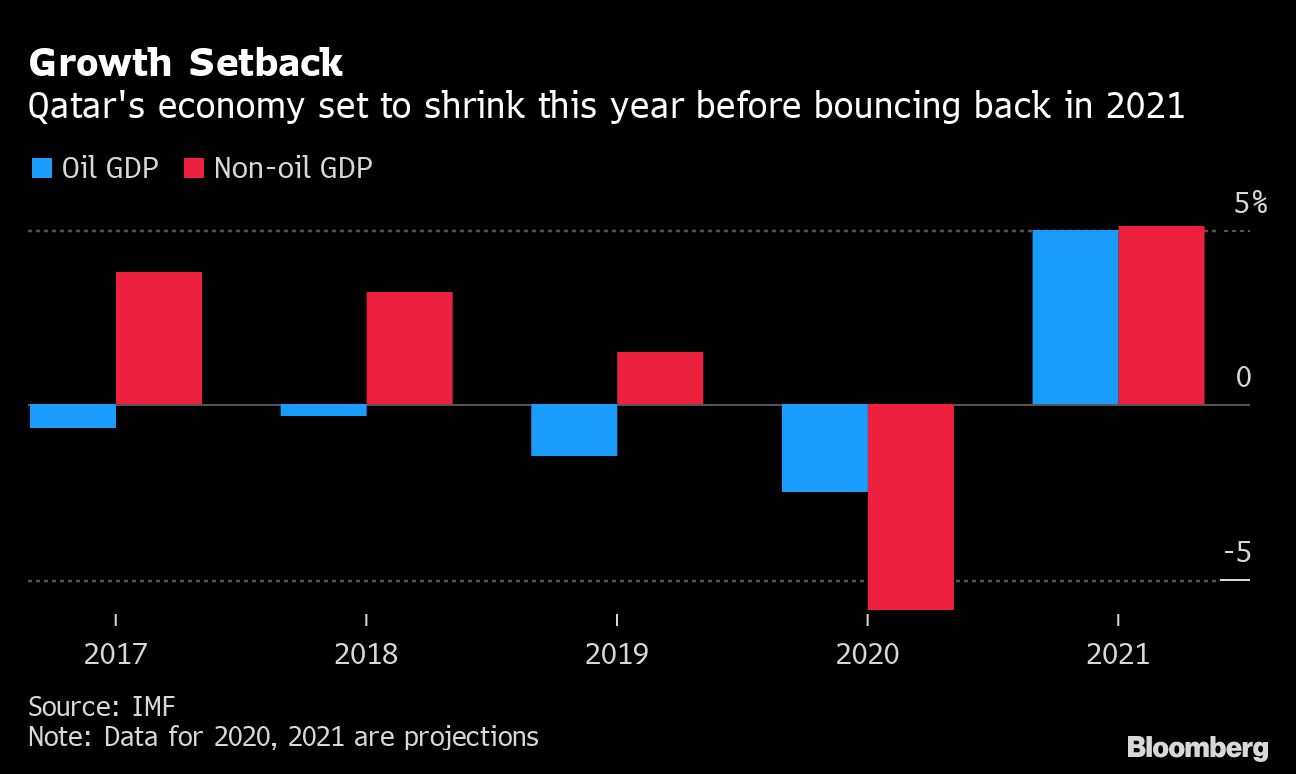 “With demand and prices expected to recover only gradually, ongoing pressure on revenue implies the fiscal surplus will move into deficit this year, even if we assume expenditure restraint,” said Maya Senussi, senior Middle East economist at Oxford Economics.