On the final day of March, the supertanker Newton, loaded with crude from Saudi Arabia, did something rarely seen in the world of oil trading: it abruptly diverted from its original destination, Egypt, setting sail for the U.S. Gulf Coast instead.

The Newton is just part of a flood of Saudi crude that’s headed for the U.S., with oil prices near the lowest levels in almost two decades. And it occurs as President Trump’s administration considers tariffs on imports of oil from OPEC’s largest producer. 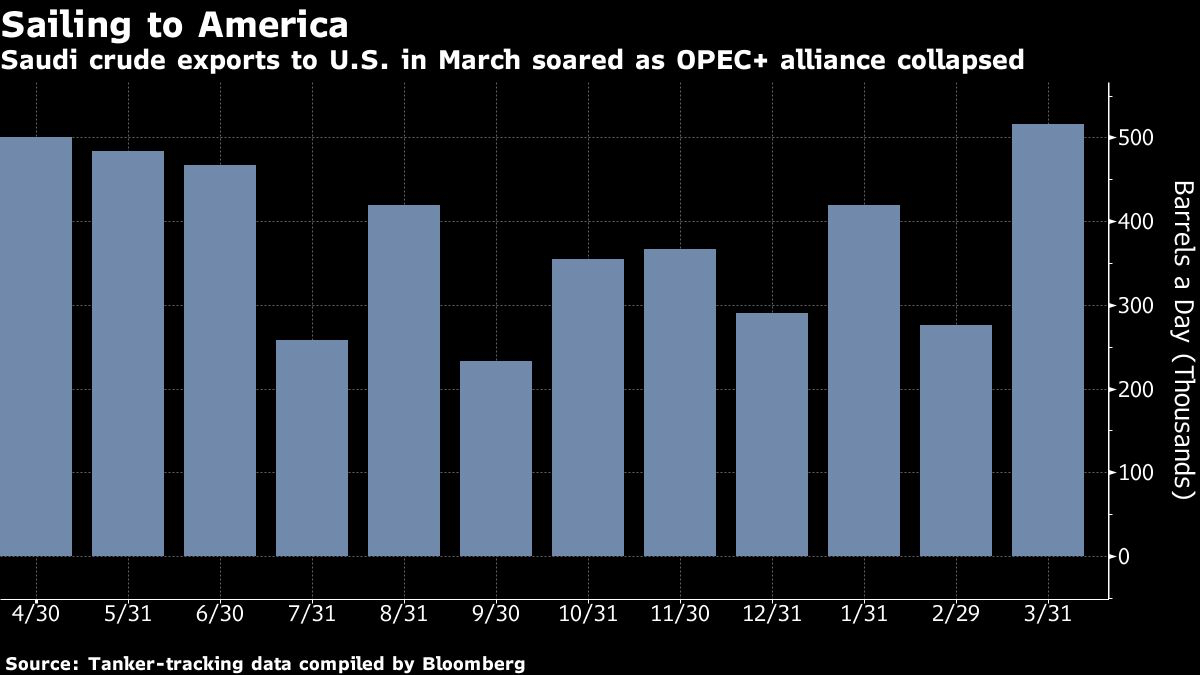 Saudi crude exports to the U.S. in March jumped to at least 516,000 barrels a day, the highest in a year, according to tanker-tracking data compiled by Bloomberg. So far in April, at least seven supertankers have left Saudi Arabia for America’s Gulf Coast, and another is expected to load in the coming days. Almost all of the vessels are chartered by Bahri, the Saudi national shipping company, fixture data show.

The seven tankers that have sailed for the U.S. this month are hauling a combined 14 million barrels of crude. Through the same period in March, the kingdom exported just 2 million barrels to America. Saudi Arabia has pledged to boost exports in general, following the collapse of the OPEC+ alliance last month, and as of last week it was on track to ship 10 million barrels a day.

The surge of Saudi crude comes at a decisive moment for the oil market, with the coronavirus outbreak squelching demand and a price war led by Saudi Arabia itself contributing to a supply glut. Prices have slumped so low that they could lead to forced output cuts if the current situation continues.

That may not happen. Members of the former OPEC+ alliance are set to hold an online meeting on Thursday to discuss the possibility of voluntary cuts. On Friday, energy ministers from the Group of 20 nations will also hold a virtual meeting, giving the U.S. and others an opportunity to weigh in. Trump said earlier this week that he didn’t think tariffs would be necessary to blunt the impact of cheap oil imports, but added that he would impose them if he had to do so.