The amount of money migrant workers send to their home countries usually holds up well in a crisis. Not this time.

Waves of job losses among overseas workers and international border closures are sapping the $690 billion annual flow of global remittances at a time when many emerging economies need hard currency more than ever. Lebanon, Ukraine and the Philippines will be among the hardest hit, while Latin America could see an 18% drop in money being sent home compared with last year.

Global remittances flows have reached record highs in recent years as countries have become more closely interconnected. Apart from China and Ecuador, most of the reported Covid-19 cases come from industrialized nations that are home to the majority of the world’s migrant workers, according to Manuel Orozco, who directs the Inter-American Dialogue’s migration, remittances and development program in Washington.

The crisis could cut working hours by 6.7% globally in the second quarter of this year, according to the International Labor Organization.

The shock from coronavirus “upends the wisdom about remittances being very stable” said Elina Ribakova, deputy chief economist at the Institute of International Finance in Washington. “The countries where migrant workers are temporarily based are experiencing a big crisis, and many of them are in the sectors that are being hit.” 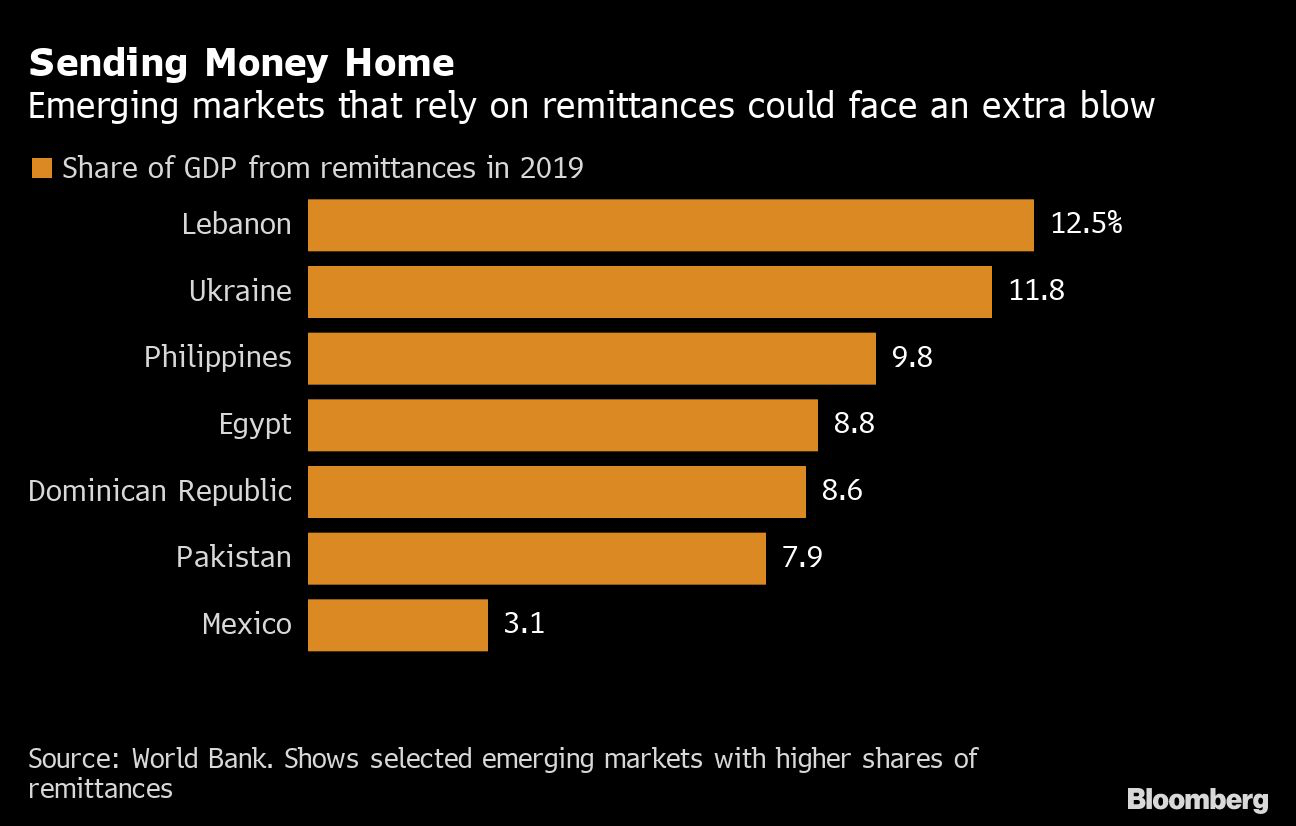 Here’s a rundown on some of the emerging markets that will be affected the most:

Lebanon was already suffering from a drop in remittances due to a sovereign default and economic turmoil. Money sent home from the country’s diaspora used to be a key factor in keeping finances afloat. Unofficial capital controls imposed by commercial lenders have put pressure on household finances, leading to a devaluation in black-market rates for the pound.

Ukrainian workers who flocked to higher-paying jobs in the European Union in recent years rushed to get back home last month before the border was closed. The central bank said remittances could drop by as much as $3 billion this year as a result.

“If we take some remittances off the balance, then it should devalue the hrvynia,” said Vitaliy Sivach, a Kyiv-based bond trader at Investment Capital Ukraine. “The big question is how long it will last.”

The currency has fallen more than 12% this year, but lower energy prices and rising revenue from wheat exports may offset some of the damage.

The Philippinesmostly to the Middle East. Remittances from Filipinos working overseas, which account for about one-tenth of the economy, may decline by as much as 30% this year as thousands of workers return home, Economic Planning Secretary Ernesto Pernia told ABS-CBN News.

Remittances and tourism are the two largest sources of foreign currency for Egypt and many Egyptians working overseas are based in countries dependent on oil exports.

The drop in repatriated money, combined with a recent slump in portfolio inflows, will erode the country’s foreign-currency reserves, according to Ehsan Khoman, head of Middle Eastern research at MUFG Bank in Dubai.

The Dominican Republic has one of the highest remittance rates in Latin America as a share of gross domestic product, World Bank data show. Foreign workers sent $582 million home in January, according to the central bank.

Pakistan’s central bank intervened to stop a plunge in the rupee last week as remittances dropped. Almost a third of Pakistan’s money transfers come from the U.S. and the U.K., two countries at the epicenter of the coronavirus outbreak, according to Mohamed Abu Basha, head of macroeconomic research at Cairo-based investment bank EFG Hermes.

“I would expect to see a bit of a slowdown for one to two quarters because of that exposure,” Abu Basha said, adding that some of the drop will be offset by lower fuel costs.

Remittances to Mexico totaled $2.7 billion in February, up 10.5% year on year. Money transfers from abroad, mostly the U.S., account for a significant part of the country’s informal sector. A drop will likely hamper household incomes and further damage the country’s economic outlook.

In Central America, a region ravaged by gang violence, drug trafficking and poverty, remittances are a multi-billion dollar industry that have made governments less reliant on the bond market for financing. Under emergency coronavirus measures, the U.S. has implemented a rapid-fire deportation system. Unauthorized border crossings have tumbled, and initial data from this year show remittance flows have already declined.