By Ken McCallum and Netty Ismail and Archana NarayananBloomberg

The Gulf monarchy, which is the world’s biggest exporter of liquefied natural gas, rated AA- by S&P Global Ratings, launched $2 billion in five-year bonds, $3 billion in 10-year notes and $5 billion in 30-year debt. The shorter notes will pay a 300 and 305 basis-points premium over similar Treasuries, respectively, and the longer bond will return a 4.4% yield, all lower than the initial price talk.

“Qatar is double-A rated and now offers yield which we could only dream of a couple months back,” said Carl Wong, head of fixed income at Avenue Asset Management Ltd. in Hong Kong. 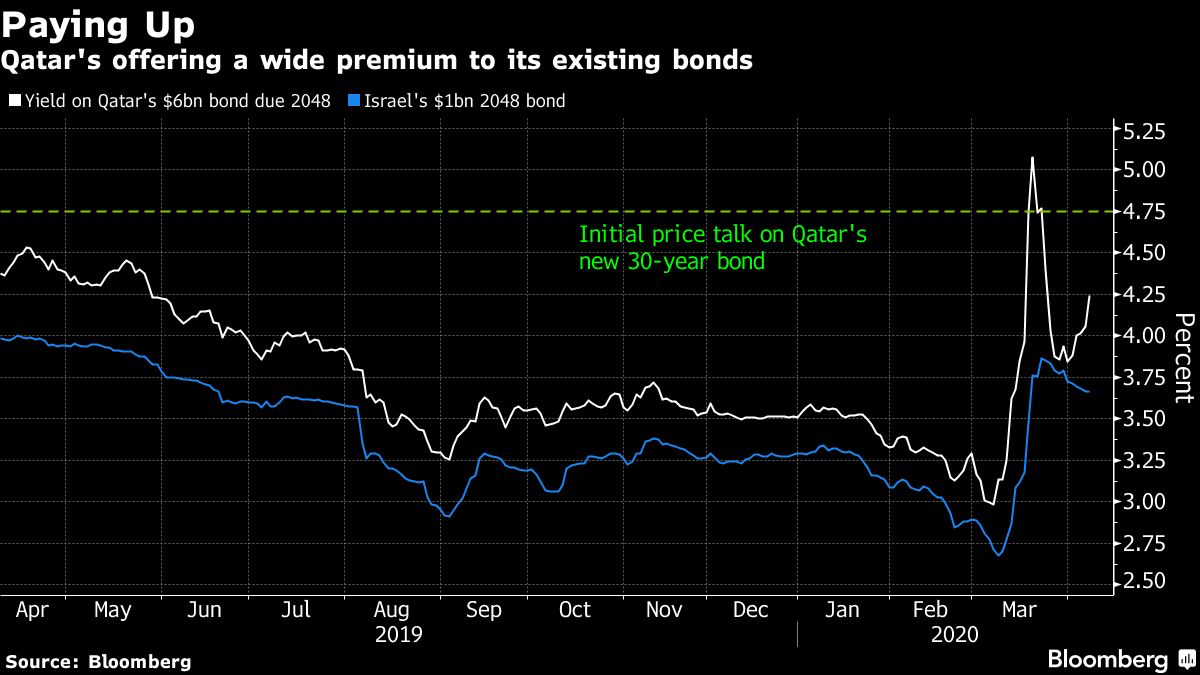 Sovereign sales are resuming after the spread of the coronavirus outbreak and the plunge in oil prices all but closed developing bond markets for most of March. As well as Israel’s deal, Panama issued $2.5 billion and Indonesia raised $4.3 billion on Monday in its biggest-ever offering in dollars.

“Qatar has offered juicy spreads on all three tranches,” said Chirag Doshi, chief investment officer at Qatar Insurance Company in Doha, who will probably buy the bonds. “The issue is expected to generate favorable demand and will open the door for more regional bond sales.”

Virus-related lockdowns are hammering most Gulf economies. Gas prices are closely tied to oil prices, which have almost halved this year after a deal between major producers to curb supply fell apart.

Sovereign wealth funds of Gulf Arab states are bringing some of their billions back home to counter slowing economic growth. The region’s funds could lose more than $300 billion this year, according to the Institute of International Finance, the industry’s global association.

What Our Economists Say…
“It’s generally cheaper to borrow than liquidate assets. And it’s also useful to keep your liquid reserves for emergency, especially under the current circumstances. I think any country which can borrow now at reasonable rates should do that.”

— Ziad Daoud
Qatar may have decided yields in the bond market were low enough to make it a better option for bolstering its capital than drawing down reserves or selling assets, according to Abdul Kadir Hussain, the head of fixed-income asset management at Arqaam Capital in Dubai.

“They continue to be a strong credit with low leverage,” he said. “Clearly, they believe that deficits will remain and hence they are not expecting a huge turnaround in gas prices. This is one of the tools for funding those deficits and in their view the right one to use for now.”