The oil-price war isn’t doing any favors for Saudi Aramco’s bondholders one year on from the state-owned company’s debut on international capital markets.

Trumpeted at the time as one of the most anticipated offerings of the year, the $12 billion of bonds have just clocked an 8.2% loss in March, their worst ever monthly performance, as crude prices more than halved. The outlook isn’t good either. Baltimore-based T. Rowe Price, which manages $1.2 trillion, says the securities will remain under pressure as long as the world’s top oil producers fail to agree on supply curbs.

“It’s been, for the market, a reality check,” said Willem Visser, a T. Rowe fixed-income analyst. “Aramco tries to project itself as being a triple-A rated credit that’s bigger and better than the other oil majors, but people forget about the political risk.” 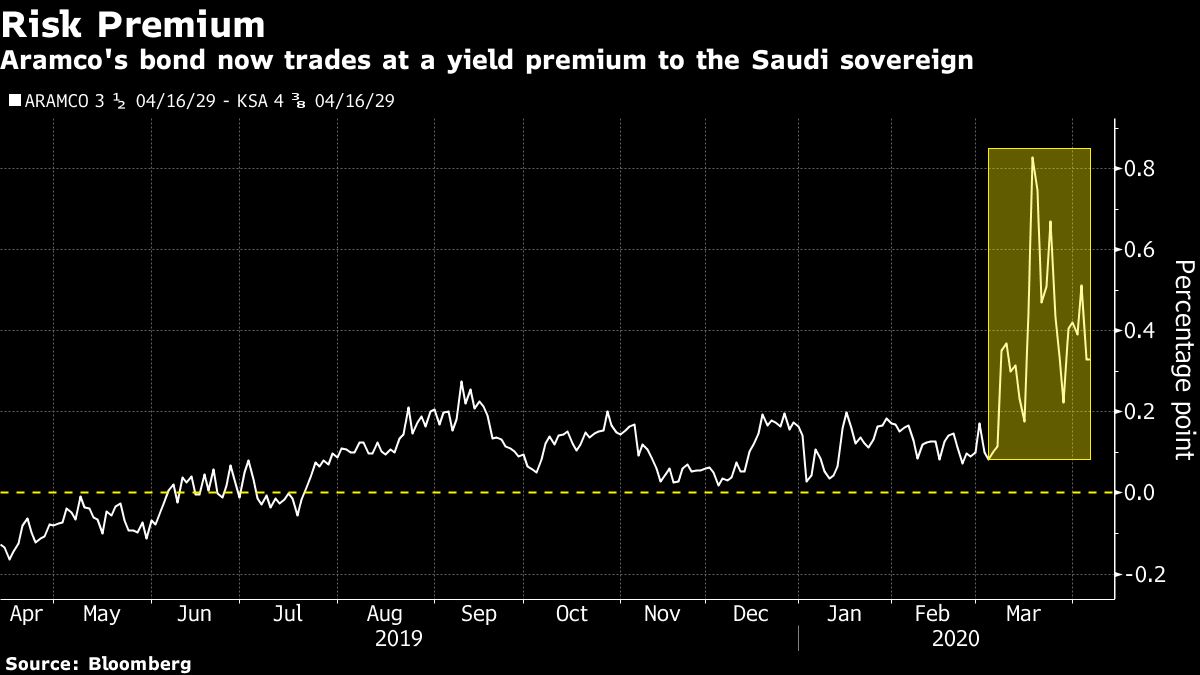 Aramco’s $3 billion of bonds due 2029 now trade with a higher yield than the government’s debt of similar maturity.

That contrasts with a year ago, when the energy giant issued its Eurobonds. The notes priced with a lower yield than those of the government itself, a rarity in corporate bond markets.

Equity investors have also been hit. Aramco listed around 1.5% of its stock in the Saudi capital of Riyadh in December. Its market value has fallen from a peak of $2 trillion to $1.7 trillion. The stock remains below the 32-riyal listing price it surrendered a month ago.

Aramco’s assets have still suffered less than those of peers such as Mexico’s state oil company Pemex, said Sergey Dergachev, a senior money manager at Union Investment Privatfonds GmbH in Frankfurt. That’s because it remains “one of the strongest oil and gas names in the emerging-market universe,” he said.

While the oil crash has already caused Aramco to slash planned capital expenditure, it will be “very comfortable” with oil at $30 a barrel, chief financial officer Khalid Al-Dabbagh told investors in March. Brent crude prices are around $33 per barrel after rebounding 37% last week on hopes of a deal between producers. However, a meeting of the OPEC+ alliance scheduled for Monday was postponed to Thursday as Saudi Arabia and Russia traded barbs over who was to blame for the collapse in oil prices.

“We like Aramco’s fundamentals, but think the valuations are now just fair rather than attractive,” said John Bates, a corporate-bond analyst in London with PineBridge Investments Europe.