With concerns about food shortages and supply chain disruptions, Trump issued an executive order using the Defense Production Act to mandate that the plants continue to function.

The order is designed in part to give companies legal cover with more liability protection in case employees catch the virus as a result of having to go to work.

John H Tyson, chairman of Tyson Foods, said on Sunday that the food supply chain was “breaking” and warned of the potential for meat shortages.

Before issuing the executive order, Trump told reporters in the Oval Office that signing the order, “… will solve any liability problems,” adding, “And we always work with the farmers. There’s plenty of supply.”

The executive order, released on Tuesday evening, said the closure of just one large beef-processing plant could result in 10 million fewer individual servings of beef in a day.

“Such closures threaten the continued functioning of the national meat and poultry supply chain, undermining critical infrastructure during the national emergency,” the order said.

Trump acted one day after Iowa’s two US senators and its governor urged the administration to invoke the Defense Production Act to keep meatpackers open and reopen closed facilities “as soon as it is possible to do so safely.”

Iowa produces one-third of the nation’s pork supply, according to the state officials.

A senior administration official told Reuters news agency the US government would also provide guidance to minimise risk to workers who are especially vulnerable to the virus, such as encouraging older workers and those with other chronic health issues to stay home.

Unions were not impressed. Some farmers said it was too late because pigs had been euthanised already instead of the pork going to market.

The United Food and Commercial Workers union (UFCW) said in a statement that if workers were not safe, the food supply would not be either.

“While we share the concern over the food supply, today’s executive order to force meatpacking plants to stay open must put the safety of our country’s meatpacking workers first,” the union said.

UFCW, the largest US meat-packing union, demanded that the administration compel meat companies to provide “the highest level of protective equipment” to slaughterhouse workers and ensure daily coronavirus testing. 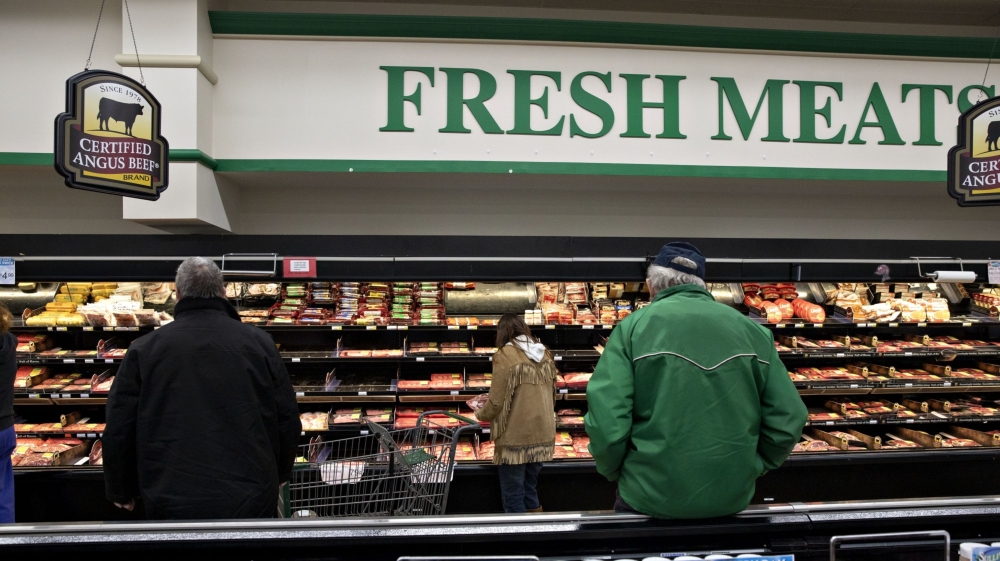 The order was little consolation for farmers such as Henry Moore of Clinton, North Carolina, who in recent weeks aborted thousands of unborn piglets and euthanised newly born ones because of the closures of packing plants.

Tyson said on Wednesday it was closing two pork-processing plants, including its largest in the US, further tightening meat supplies following other large slaughterhouse shutdowns.

JBS’s local unit and Smithfield Foods Inc did not immediately respond to calls and emails from Bloomberg news agency, while Tyson and Cargill Inc said they could not comment because they did not have the executive order.

Tyson did tell Bloomberg that safety remains its top priority “while we work to continue fulfilling our role of feeding families across the country.”

US meat companies slaughtered an estimated 283,000 hogs on Tuesday, down about by 43 percent from before plants began shutting because of the pandemic, according to US Department of Agriculture data. Processors slaughtered about 76,000 cattle, down about by 38 percent.

Critics of Trump’s order made clear that plants were being shut down for a reason.

“When poultry plants shut down, it’s for deep cleaning and to save workers’ lives. If the administration had developed meaningful safety requirements early on as they should have and still must do, this would not even have become an issue,” Stuart Appelbaum, president of the Retail, Wholesale and Department Store Union, said in a statement.

The White House worked directly with executives from the meat-processing companies to determine what they needed to stay open safely, the administration official said. He said there were enough workers who could safely go to work and ensure the supply chain continued to churn.

More than 6,500 meat- and food-processing workers have been infected with or exposed to the new coronavirus, and 20 have died, the UFCW said on Tuesday.

Administration officials and some Republicans on Capitol Hill have said businesses that are reopening need liability protection from lawsuits employees might file if they become sick.

Senate Democratic leader Chuck Schumer, speaking to reporters on a teleconference on Tuesday that mainly centred on immigrants working in the healthcare sector, was asked about Senate majority leader Mitch McConnell’s pushing for business liability protections as they reopen their operations.

“Is he saying if an owner tells a worker he needs to work next to a sick person without a mask and wouldn’t be liable? That makes no sense,” Schumer said.