The United States House of Representatives on Thursday voted 388 to 5 to approve legislation aimed at providing $484bn for small businesses, hospitals and a national COVID-19 testing strategy .

The bill was approved unanimously by the US Senate on Tuesday after bipartisan negotiations with the White House, and will now go to US President Donald Trump for his signature. Trump is expected to sign the bill quickly.

“The COVID-19 pandemic is ravaging America. Small businesses are shuttered. Thousands have died. Millions of Americans are unemployed. Rome is burning. We can either put out the fire or watch our great nation go down in flames,” Representative Hakeem Jeffries, a Democrat, said in urging the legislation forward.

“This is a strong step in the right direction,” Jeffries added.

The emergency spending package adds approximately $320bn to a programme designed to help small businesses keep employees on their payrolls until the US economy can be reopened again.

Congress provided $350bn in March for small businesses under the so-called Paycheck Protection Program, but the money was quickly exhausted by overwhelming demand.

The programme was designed to help companies with fewer than 500 employees, but a number of larger companies found ways to obtain funds through their banks in the first round.

The new bill seeks to compensate for inequities in the US financial system by channeling $60bn of the new funding through community lenders in under-banked neighbourhoods and rural areas.

More than 26 million Americans have lost their jobs since the coronavirus pandemic forced businesses to shut down.

The bill also includes $75bn for hospitals hit hardest by the coronavirus pandemic and another $60bn for economic disaster assistance, as well as $11bn for states, according to a summary of the legislation.

The impact of the coronavirus is starting to be felt personally by members of Congress. Senator Elizabeth Warren announced on Twitter that her older brother had died, and Representative Maxine Waters said during House debate that her sister was lying in a hospital bed dying of the disease.

My oldest brother, Don Reed, died from coronavirus on Tuesday evening. He joined the Air Force at 19 and spent his career in the military, including five and a half years off and on in combat in Vietnam. He was charming and funny, a natural leader. https://t.co/b8m0xKzAmM

“We are in the middle of this global pandemic. This isn’t a Republican virus or a Democratic virus. It doesn’t recognize the colour of your skin, or the country of your origin, doesn’t know what god you worship. We’re in this together,” Representative Ami Bera, a Democrat, said.

The House followed unusual procedures during the debate and voting on the $484bn measure, wearing masks and entering the House chamber to debate and vote in small groups by alphabetical order.

The legislation allocates $25bn for testing for the coronavirus that House Speaker Nancy Pelosi and other Democrats sought, and calls on the Trump administration to define a strategy to provide nationwide testing focused on boosting capacity by increasing the availability of testing supplies.

Coronavirus testing has been inconsistent between locales in the US and often restricted to those seeking care at hospitals. Epidemiologists say testing must be much broader to enable a successful reopening of the US economy.

More than 4.5 million coronavirus tests have been administered in the US to date, and some 846,000 cases of COVID-19 – the disease caused by the novel coronavirus – identified, according to data collected by Johns Hopkins University. Nearly 47,000 Americans have died from the disease.

Trump tweeted on Tuesday that he supported the negotiated agreement with Democrats and would sign the bill. Republicans complained that Democrats had delayed the new small business funding by two weeks with their demands for funding for hospitals and testing.

Today’s legislation is the fourth bill Congress has passed to address the coronavirus outbreak and adds to the more than $2.2 trillion in emergency spending previously approved.

The House also voted on Thursday to create a new oversight panel to track the unprecedented federal spending.

Republicans and Democrats were unable to reach agreement on changes to House rules that would effectively allow for remote voting and committee meetings, postponing action on the proposals. Rank-and-file members on both sides are growing increasingly frustrated that Congress is not convening in regular session to address the virus.

The two parties are already bickering over funding priorities for a fifth bill.

Senate Democratic leader Chuck Schumer suggested a fifth bill should equal the previous $2.2 trillion package in size and scope. Democrats want the next bill to include bailout funds for states and cities whose budgets have been decimated by the loss of tax revenue.

But Senate Majority Leader Mitch McConnell, a Republican, said on a conservative radio talk show on Wednesday that he would prefer states declare bankruptcy rather than rely on federal bailouts, a proposal that New York Governor Andrew Cuomo assailed as “one of the really dumb ideas of all time”.

Cuomo, in his daily briefing on Thursday, decried the divisive politics coursing through the response to the pandemic.

“If there was ever a time to stop your obsessive political anger… now is the time,” Cuomo said. 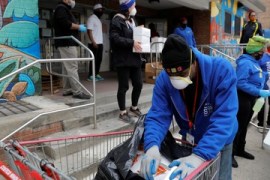 US essential workers risk their health to keep economy running

Essential workers are keeping the American economy humming, at great risk to themselves and their families.