United States crude oil futures plunged back into negative territory and Brent collapsed on Tuesday following a historic plunge in oil prices below zero for the first time ever.

The fall in prices was triggered by the expiry of May futures contracts for US West Texas Intermediate (WTI) crude, which would have left traders stuck with barrels of physical oil in a market with few willing buyers as the coronavirus pandemic continues to ravage energy demand.

Negative oil prices are a sign that producers are willing to pay people to take oil off their hands.

Global stocks were also dragged into the red on Tuesday with MSCI’s index of emerging market stocks down 2 percent, eyeing its worst day in nearly three weeks. The currencies index was down 0.4 percent.

The slump in the US futures contract for crude was exaggerated by the looming expiry late on Tuesday of the front-month contract for the delivery of oil in May when the lack of storage is set to be particularly acute.

The more active June contract, which had earlier been well supported, slipped more than $1 to just above $18 a barrel. June trading volumes were roughly 80 times those of the expiring May contract.

“The coming weeks are surely going to be interesting for the oil markets,” Suvro Sarkar, of DBS Bank, told Al Jazeera.

DBS sees the second quarter of 2020 as being the trough for oil prices and Sarkar expects that WTI futures may continue to trend towards zero in the coming month.

“We do not think Brent will follow it all the way there. But, we would not be shocked if Brent breaches 20 or 10 dollars per barrel in coming days or weeks,” he said.

Unlike the internationally shipped Brent crude, WTI front-month contracts involve physical deliveries of the oil to a specific location, namely the oil terminal in Cushing, Okhlahoma, which is rapidly filling up, Sarkar explained.

Although international storage is more readily available than US storage at this point, Sarkar said, “one might wonder … if traders cannot access US storage for physical crude deliveries in May, how will they find storage for June?”

The coronavirus pandemic has pummeled global travel, transportation and economic activity, sending the demand for crude plummeting. As such, many traders holding oil futures were left with an oversupply of physical oil.

Unfortunately, the options for the Saudi Arabia-led Organisation of Petroleum Exporting Countries and fellow major oil producers including Russia – a group known collectively as OPEC+ – options for further supply cuts are limited.

“Cutting production further on a [government-to-government] level can hardly make too much of a dent in the near term, and is not feasible for smaller countries to agree to cut above 25 percent. So options for US and OPEC+ are limited in the face of this deep hole in demand that we see in 2Q20,” Sarkar said.

OPEC+ had previously agreed to reduce oil output by a record 10 million barrels per day, although most analysts saw this move as insufficient to support oil prices in a market where demand remains weak due to the pandemic.

The American Petroleum Institute is set to release its data at 4:30pm (20:30 GMT) on Tuesday, and the weekly report by the US Energy Information Administration is due at 10:30am (14:30 GMT) on Wednesday. 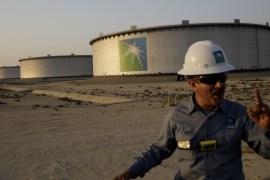 Plummeting oil prices, combined with other coronavirus pressures, are hurting the budgets of Gulf nations in particular. 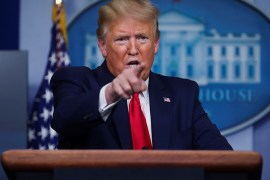 Trump said topping up nation’s Strategic Petroleum Reserve is an option, after US crude May contract turns negative.