The US logged a record number of deaths on Wednesday with nearly 2,500 dying over the past 24 hours.

But a bullish Trump told reporters his “aggressive strategy” against the virus was working and “the data suggests that nationwide we have passed the peak on new cases”.

He promised swift “guidelines” on reopening parts of the country, suggesting less-affected states could ease restrictions before May 1.

“It’s a big day tomorrow,” said the US president.

Trump called the latest data “encouraging” saying the numbers have “put us in a very strong position to finalise guidelines for states on reopening the country“.

Dr Deborah Birx, the White House coronavirus taskforce coordinator, added data from across the country showed the nation “improving” but that Americans had to recommit to social distancing to keep up the positive momentum.

Leaders around the world are wrestling with the dilemma of how to return to normal and kick-start their shattered economies without risking a devastating second wave of infections.

Elsewhere in Europe, Denmark began reopening schools for younger children after a month-long closure, and Finland lifted a blockade of Helsinki. Hard-hit Iran is set to allow some small businesses to restart operations.

However, the United Kingdom was expected to extend its lockdown measures later on Thursday and Belgium pushed its stay-at-home order to May 3.

United Nations chief Antonio Guterres said only a “safe and effective vaccine” can return the world to normal, hoping that could be available by the end of the year.

And the chief executive of the Bill & Melinda Gates Foundation laid bare the challenge facing humanity to shield itself from the virus in future.

“There are seven billion people on the planet,” said Mark Suzman. “We are going to need to vaccinate nearly everyone. There is no manufacturing capacity to do that.”

Even with a vaccine, the virus is expected to lay waste to the global economy, with the International Monetary Fund warning $9 trillion could be lost in a second Great Depression.

In the US, the pandemic has caused at least 17 million people to lose their jobs and many are becoming increasingly desperate.

Despite the gloom, tales of resilience and generosity around the world lifted spirits.

In the central English city of Birmingham, Connie Titchen, aged 106, defied the odds to beat the virus. She was applauded by medical staff as she left to see her grandchildren.

Also in the UK, Tom Moore, a 99-year-old World War II veteran, has raised almost 12 million pounds ($15m) for health workers by doing laps of his garden with a walking frame.

“In the last war, it was soldiers in uniform on the front line. This time our army are the doctors and nurses [in] uniforms,” Moore told British TV earlier this week.

President Trump said he will allow some states to quickly ease up on social distancing but business leaders told him they need more coronavirus testing and personal protective equipment before people can safely go back to work.

The new guidelines are aimed at clearing the way for an easing of restrictions in areas with low transmission of the coronavirus, while keeping them in place in harder-hit places. The ultimate decisions will remain with US governors.

In a round of calls with business leaders earlier in the day, Trump was warned a dramatic increase in testing and wider availability of protective equipment will be necessary for the safe restoration of their operations.

In a tweet midway through Trump’s round of conference calls, the president said the participants were “all-in on getting America back to work, and soon“.

But participants raised concerns about the testing issue, according to one participant who spoke on condition of anonymity.

Another person who participated said it was stressed to Trump that expansion of testing and contact tracing was crucial, as well as guidelines for best practices on reopening businesses in phases or in one fell swoop.

Mark Cuban, the billionaire entrepreneur and owner of the NBA’s Dallas Mavericks, was among several representatives from major sports leagues to speak with Trump. During a Fox News interview before the calls, he credited the president with gathering some of the “best of the best” to help shape his approach on reopening the economy.

Still, Cuban did not embrace Trump’s push to reopen parts of the economy by May 1.

“This is such a moving target that I think the biggest mistake we can make is rush to a decision,” said Cuban, who previously had been critical of Trump’s response to the pandemic. ” But I’m going to help him in every way I can, whatever he needs me to do.“

Behind Trump’s effort to accelerate reopening the US economy during the pandemic is a contingent of allies eager to have his back.

The push to revive the economy is being influenced and amplified by a potent alliance of big money business interests, religious freedom conservatives, and small-government activists, some with direct dial to Trump. They are gaining currency as a counterpoint to the health professionals who warn of potentially deadly consequences from easing coronavirus stay-home restrictions too soon.

“It’s about promoting liberty and freedom,” Moore said. “It’s about stopping spending that will bankrupt the country, and getting the $20 trillion engine that is the American economy started again as soon as possible – as in tomorrow.”

“We’re really trying to get this thing going quicker than a lot of people may expect,” said Senator David Perdue in a radio interview. “What we see right now is the free market, free-enterprise system is under threat. Don’t come in and tell us how to run our lives.”

But Democrat House Speaker Nancy Pelosi issued a stark warning for Americans to “ignore the lies”  and “listen to scientists and other respected professionals” to protect themselves and loved ones.

“All of us want to resume the precious and beautiful lives that America’s unique freedoms provide,” Pelosi wrote in a letter to Democratic colleagues. “But if we are not working from the truth more lives will be lost, economic hardship and suffering will be extended unnecessarily.” 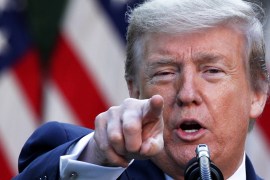 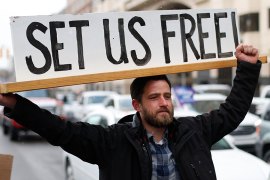 Coronavirus lockdowns turn political with protests in US

Critics lash out at Michigan order barring residents from moving between homes and halting sales of garden supplies.