Tunis, Tunisia – When Hadda Chalbi received a call from the local hospital last week, she did not expect to be told that her only brother had set himself on fire and fallen into a coma.

Unemployed, physically disabled and with a child on the way, Hammadi Chalbi’s desperation had become too much to bear, leading the 32-year-old to self-immolate outside the local government offices in Maktar, some 160 kilometres (99 miles) southwest of Tunis.

The local administration had repeatedly declined to issue Hammadi a vendor’s permit, Hadda told Al Jazeera, which she attributed to favouritism within the local government.

Her younger brother wanted to work his way out of poverty, but instead was forced to rely on his seven sisters for his and his wife’s income.

“When you’re disabled and desperate what can you do?” lamented Hadda. “[Hammadi] cannot work, he has no source of income and is only getting money from his sisters. Is there a bigger desperation than that?”

Exasperation among Tunisia’s low-income families is not new. The country’s economy entered a period of decline following the removal of Zine El Abidine Ben Ali in the 2010-2011 uprising, which had been triggered by the public self-immolation of a young street vendor.

According to World Bank data, Tunisia’s economic growth since 2010 has averaged 1.8 percent a year, significantly lower than annual averages had been in the previous decade. Under Ben Ali, unemployment reached a low of 12 percent in 2007, and at the height of the uprising in 2011, it surged to 18 percent. Last year, the figure was 15 percent.

Yet nothing had prepared families like the Chalbis for the outbreak of the novel coronavirus pandemic and the government’s decision in late March to impose a two-week nationwide lockdown in an attempt to limit the spread of the virus. It has since been extended until April 19.

The lockdown has forced the closure of restaurants, hotels and offices, a ban on international flights and the closure of land borders, bringing an already struggling economy to a standstill. The International Monetary Fund on Friday said it expected Tunisia’s economy to contract by 4.3 percent in 2020, in what would be the deepest contraction since it declared independence in 1956. But for a country with a fragile healthcare system, prevention is being treated as the lesser of two evils. Tunisia has confirmed 699 cases of COVID-19 and 25 associated deaths.

In an attempt to mitigate the effect of the measures on businesses and head off potential social unrest, Prime Minister Elyes Fakhfakh announced in late March that 2.5 billion dinars ($850m) would be allocated to combat the social and economic effects of the crisis.

The package included some 450 million dinars ($155m) in aid to poor families or those who have lost their jobs due to the coronavirus outbreak, in addition to a postponement on taxes on small and medium-sized businesses and delaying repayments for low-income employee loans.

But for Tunisia’s daily wage workers, most of whom have little in the way of savings, even the short-term loss of their livelihoods can be devastating.

“The lockdown is not a good decision,” said Hammadi’s sister, Hadda. “People cannot stand it, [they] are already poor and not being able to work is killing them.” Her brother is one of two known cases of self-immolation to take place in Maktar since the lockdown came into effect.

‘Hunger made them protest’

Last week, desperation gave way to anger as hundreds of people marched in front of their local government offices in different parts of the country, demanding an end to the lockdown and access to the financial aid the prime minister had pledged last month. A number of similar protests against the lockdown also erupted in late March.

“People came out spontaneously – hunger made them go protest,” said Marwan Jelassi from his home in Cite Ettadhamen, a working-class neighbourhood in north Tunis. “They went to the local governor’s office, but it was closed … all of them are people who lost their source of income.”

The 32-year-old plumber ran out of savings soon after the lockdown began and has not worked since. “On TV they say they will take care of you and provide you with a solution, but in reality public offices are closed and there is no one to tell you how or what to do, this is what led to people getting angry and protesting,” he explained.

These days, Jelassi stays at home with his wife and six-year-old son and tends to his plants. When he does leave the house, he is careful to avoid the landlord. “He wants me to pay the rent and I cannot afford it for now.”

Like many other daily-wage workers, he can no longer afford to buy groceries for his family of three and now relies on his mother-in-law sending pasta, flour, milk and coffee.

“In such conditions you cannot work and cannot even borrow money … there will be a catastrophe, people can’t stand it anymore, hunger leads to catastrophes,” said Jelassi.

Not far from Jelassi’s home, in Cite Bassatine, 36-year-old construction worker Mohammed Ghodhbane blames government inaction and the marginalisation of low-income areas like his own.

“[Politicians] only remember us when there are elections,” he said. “They come, they give us support and want us to vote for them but now we don’t mean anything to them … [we] are just numbers to them.”

Despite being asthmatic and therefore at greater risk of complications related to the coronavirus, Ghodhbane says he cannot afford to stay at home and instead continues to take to the streets in search of a daily wage so that he can provide food for his family.

“We need food and solutions, we will die if this continues, at least the virus is curable but what can we do for the hunger?”

On Monday, a video circulated on social media showing President Kais Saied distributing aid packages to families. The president, who was elected in October, based much of his campaign on his austere persona amid a corrupt political elite.

Earlier this month, three heads of mutamadiyah – the Tunisian equivalent of a county – were removed from their posts. Local media speculated that the dismissals were related to the officials’ handling of financial aid

But some protesters said the dismissals made no difference to them.

“Now that they dismissed the local governor … they think that they resolved the problems. But nothing happened, today we are still in the streets and we still need the same requests,” said Mongi Bayar.

‘We are asking to live with dignity’

Like Hammadi, Bayar travelled to his local council in Maktar on April 5 to demonstrate against the state of the economy in the town. Exhausted by years of hardship and indignant at the sight of so many fellow-Tunisians begging for help and being ignored, 35-year-old Bayar knelt to pick up a piece of broken glass he had found on the floor and slashed his arms and stomach in a desperate act of protest.

“I couldn’t stand such an injustice … we were only asking to live with dignity,” said Bayar. “The situation is disturbing, and this made me so desperate that I cut myself.”

“If things continue like this it will be worse than 2011 … now it’s boiling all around Tunisia and since 2011 nothing changed yet we had big expectations, but nothing happened.”

But Peter R Neumann of the International Center for the Study of Radicalization told Al Jazeera that although discontent had surfaced in renewed, often violent protests in January 2018 and then again in December last year in Tunisia, no leading voice has risen above the collective anger as of yet.

“What we’re seeing across the board in North Africa is that grievances are increasing, but only in some countries is there someone who can channel that into anti-government action,” said Neumann.

COVID-19 will inevitably have an effect on Tunisia’s lower-income families, he added. “People who are almost living day by day, small traders … these are not people that have a state income. Grievance is going to increase.” 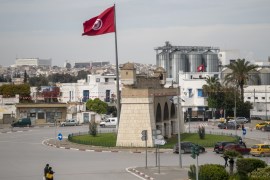 The lockdown extension came hours after a protest by several hundred Tunisians who demanded government support. 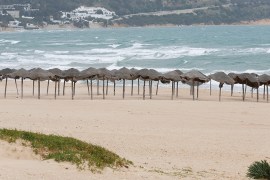 PM Fakhfakh says country needs more than $1bn to battle the coronavirus, will ask firms to help with gov’t efforts.