U.S. employment surged last month with the biggest gain since May 2018, indicating the labor market was on especially solid footing before the spread of the coronavirus intensified.

Payrolls rose 273,000 after the prior month was revised up to also reflect a 273,000 gain, according to Labor Department data Friday that beat all forecasts in Bloomberg’s survey calling for 175,000. The jobless rate fell back to a half-century low of 3.5% as average hourly earnings climbed a steady 3% from a year earlier. 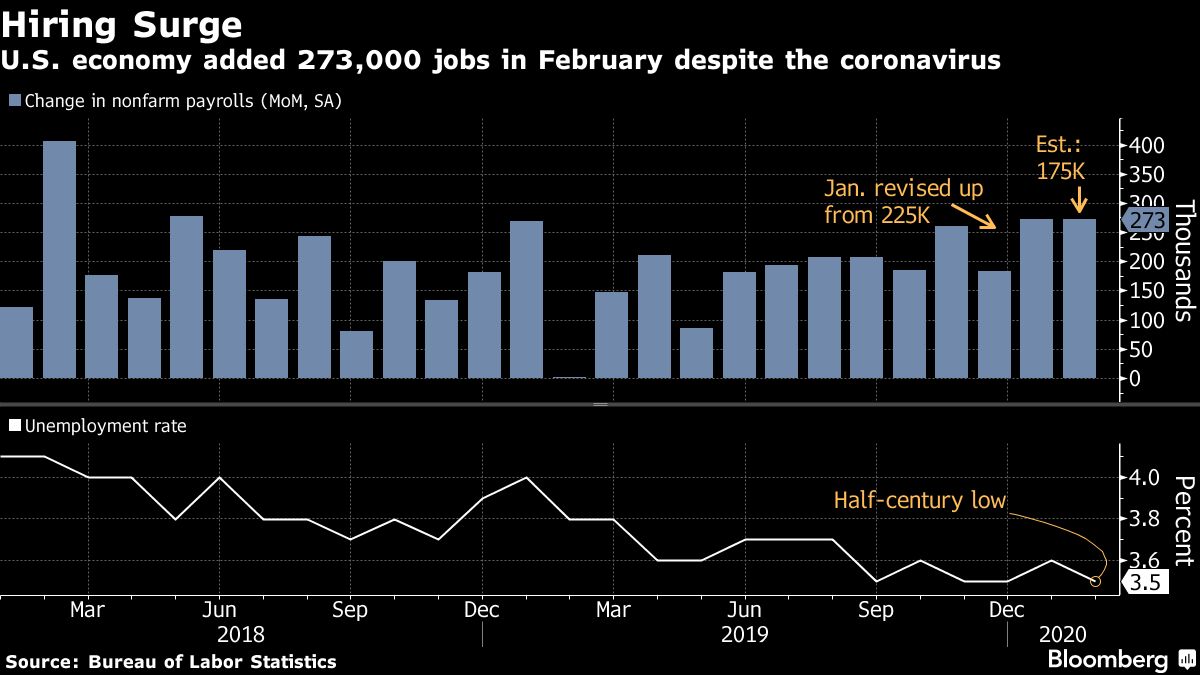 The data did little to alter a flight to safety in financial markets, as investors remained focused on the potential economic fallout from the virus. The yield on the 10-year Treasury was down 17 basis points to 0.74% while the S&P 500 fell 2.6%.

The surprisingly strong hiring signals that employment was holding up as virus concerns grew, though the report reflects conditions through mid-February, before the impact from disruptions abroad as well as the intensification of the U.S. outbreak.

“An important piece of good news here is that while we face these extraordinary uncertainties — and I think that’s going to continue throughout most of 2020 — our economy coming into this was much more resilient than say Germany or Japan,” Lara Rhame, chief U.S. economist for FS Investments, said on Bloomberg TV.

The Federal Reserve has said the labor market remains strong but employment could be poised for broad disruption should the outbreak spread further through the American workplace. Such a risk to economic activity spurred the central bank to cut interest rates Tuesday in the first emergency move since the 2008 financial crisis.

In the days since the rate cut, the economic impact of the virus has become more apparent with airlines and hotels warning of lost revenue amid canceled conferences. Meanwhile, large companies are ordering employees to work from home, depriving restaurants of business.

“The downside risks to the labor market are clear over the next four weeks,” Credit Suisse Chief Economist James Sweeney said, referring to the threat posed by the coronavirus.

White House economic adviser Larry Kudlow also praised the employment data as a “blowout.” Speaking on Bloomberg Television, Kudlow said the virus may have a temporary impact on the economy while saying that the administration is working on potential fiscal measures and could move “very rapidly” with “targeted and timely” initiatives.

February nonfarm payrolls are useful only to the extent that they show robust labor conditions prior to the outbreak of Covid-19 — although not quite as strong as meets the eye.

The report reflected a second-straight month of robust government hiring, which rose by 45,000 after a 51,000 gain in January, owing to employment at state and local governments.

Federal workers climbed by 8,000, which was almost entirely due to the Census Bureau adding 7,000 temporary workers for the 2020 tally. This should pick up throughout the year as hiring ramps up: The bureau plans to hire up to 500,000 temporary, part-time workers for the count.

Construction employment rose by 42,000 after a 49,000 gain in the prior month. But retailers and wholesalers showed declines.

The participation rate, or share of working-age people in the labor force, held at 63.4%. Greater participation reinforces Powell’s desire to sustain the expansion, as it shows more Americans coming in from the sidelines.

Manufacturers unexpectedly added workers, gaining 15,000 despite projections for a second-straight decline. The industry was beginning to strengthen late last year after the signing of the latest trade deal with China.

The U-6, or the underemployment rate, edged up to 7% from 6.9%. This measure includes part-time workers who would prefer a full-time job and those who aren’t looking, offering a more comprehensive view of the health of the labor market.