Harare, Zimbabwe – It was still early on Sunday morning when Stewart Dzivira, his wife and their two-year-old son, jumped on a bus in Glen View, a densely populated suburb of Harare, to head into Zimbabwe’s capital.

For days now, the 33-year-old has been unsuccessfully trying to get maize meal, or mealie meal, a Zimbabwean staple that has been in short supply following a devastating drought two years ago.

“We desperately need to get maize now that there is a lockdown,” Dzivira told Al Jazeera, holding his son while sitting on the concrete pavement outside a miller’s building in central Harare.

He was not alone. Hundreds of others were queueing alongside him on the eve of the start of a three-week lockdown imposed by the government to contain the spread of COVID-19, the highly infectious respiratory disease caused by the new coronavirus.

“All citizens are required to stay at home, with the exception of those seeking health services, buying food, medicine and vital supplies, and those manning our essential services,” President Emmerson Mnangagwa said on Friday as he announced the lockdown.

“I know that these measures may seem drastic, and will upset all of our daily lives, but there is no other way,” added Mnangagwa, two weeks after declaring a “national disaster” and banning gatherings of more than 100 people.

As of Sunday, COVID-19 had infected seven people in Zimbabwe and caused the death of one person, 30-year-old broadcaster Zororo Makamba.

The threat of the new disease could not have come at a worse time for millions of Zimbabweans already struggling with a deepening economic crisis bringing soaring food prices, stagnant salaries, water shortages and daily power blackouts.

Meanwhile, Zimbabwe’s annual inflation soared to more than 500 percent in February. The unemployment rate stands at more than 90 percent, medicines are scarce, and depleted state coffers mean that the government is unable to purchase sufficient supplies for the already weakened state-run medical facilities.

In December last year, the World Food Programme warned that Zimbabwe was facing its worst hunger crisis in 10 years with half of the population – 7.7 million people – food insecure.

“We know there is corona[virus] in the country, but we will die of hunger first if we don’t get mealie meal,” Dzivira said.

Dzivira is one of the millions of unemployed Zimbabweans who depend on informal jobs to put food on the table.

Under the lockdown, he doubts he will be able to go out and find any menial job – his source of income – in and around Harare.

“I don’t know how I will be surviving during the lockdown period,” said Dzivira whose daily diet comprises three meals of sadza, a corn paste, and vegetables. “I hustle for food every day, and it’s going to be a challenge for me and my family.”

Dorothy Mazonde, a 39-year mother of five, echoed his fears.

“I can’t afford to stock groceries because things are very expensive now,” Mazonde, who sells airtime and drinks in the streets of Harare, told Al Jazeera.

“I am living hand to mouth from my vending activities.”

Labelled a pandemic by the World Health Organization, the new coronavirus has wreaked havoc across the world, forcing an increasing number of countries to shut borders and impose sweeping measures in a bid to stop the spread of the disease.

To date, 723,000 infections have been reported in more than 175 countries and territories, according to data compiled by Johns Hopkins University in the US. Some 34,000 people have died, and 152,000 have recovered.

Although a lockdown appears to have helped containment efforts in China, where the coronavirus was first detected late last year, experts questioned the enforcement of similar measures in a country like Zimbabwe.

“It’s not practically possible to lock down in an informal economy without any form of relief to the needy,” Shami Fred, an epidemiologist, told Al Jazeera.

“Yes, the whole world is on lockdown, it’s the right thing to do. But without water, it’s a futile and grave exercise. Electricity, among other must-haves, is scarce.”

Frequent and thorough hand-washing with soap and water is one of the most basic weapons against the coronavirus, but in Harare alone, one million people are without running water.

On Sunday, a crowd of more than 50 people gathered at the community borehole in Kuwadzana 3, a high-density suburb west of Harareto, to fetch water.

“We have not had water for three days,” Nozipho Mpambawashe, a 25-year-old mother of one, told Al Jazeera, adding that the water supply has been erratic for the past two weeks

“We are worried because we don’t have reliable water supply. Even with a lockdown, I will still need water for cleaning, washing, cooking and drinking,” she said. 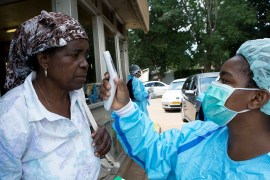 ‘How will we survive?’: Health woes deepen Zimbabwe COVID-19 fear

As government ramps up coronavirus response, residents and health professionals raise alarm over a major outbreak. 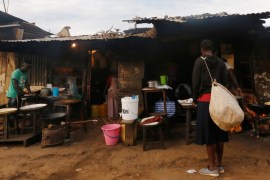