Only the old hands at the Coffeyville oil refinery could remember anything like the prices posted this month. The small Kansas plant in the heart of rural America was offering just $1.75 a barrel for Wyoming sweet crude.

With more than two billion people on virus lockdown from India to California, energy demand has plunged. In corners of the U.S., Canada, Russia and China, oil prices at the well-head are collapsing under the weight of an unprecedented glut.

And with it, the industry is bracing for something that last happened on this scale 35 years ago: producers shutting down their wells as pumping crude makes no economic sense.

The oil market — hit by the double blow of a demand slump and a supply surge as Saudi Arabia and Russia wage a price war — is battling a surplus of as much as 20% of global consumption.

The consequences are brutal: prices are now low enough to force a widespread suspension of production, or a shut-in as it’s known in the industry. For those waging the price war, it counts as a victory — as long as the shut-ins happen elsewhere. 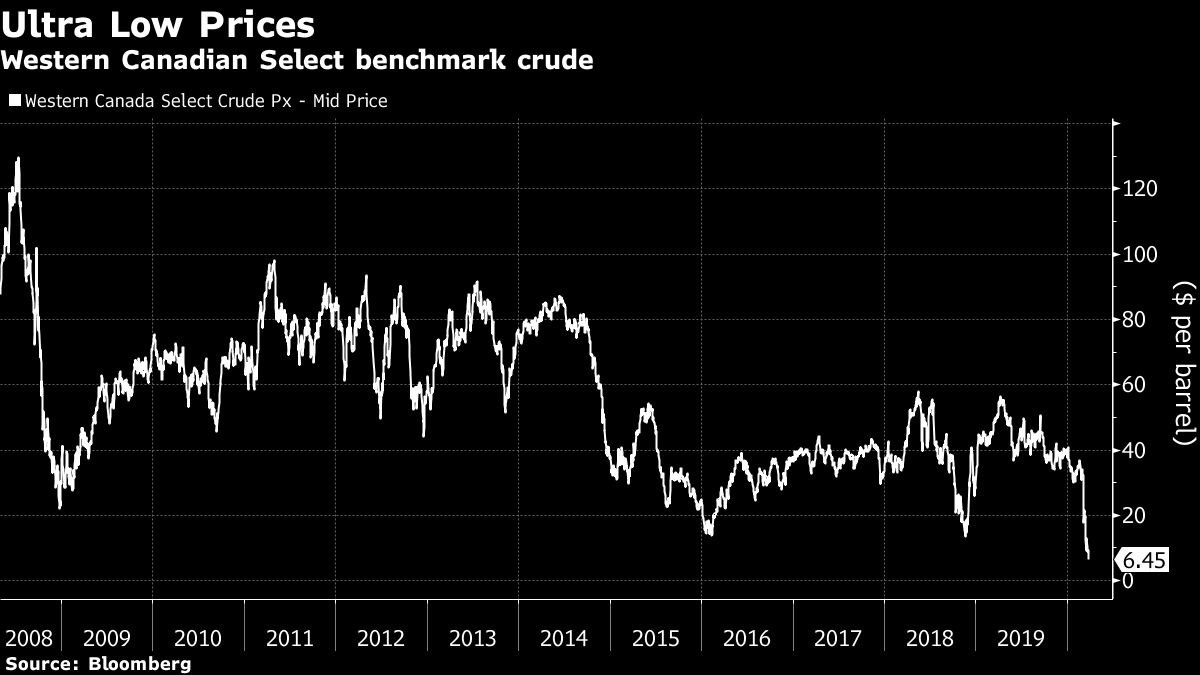 Brent and West Texas Intermediate, the benchmarks closely followed in Wall Street, are hovering around $25 a barrel. But in the world of physical oil — where actual barrels change hands — producers are getting much less.

The industry is navigating what Paul Sankey, a veteran oil analyst at Mizuho Bank Ltd, described as “uncharted waters to unknown lands.”

Wyoming Sweet, a landlocked crude with few outlets other than American refineries like Coffeyville, is paradigmatic of how the dynamics of the oil market are forcing output cuts. There are others: North Dakota Light Sweet has traded at $9.97 a barrel. Across the border, Western Canadian Select has plunged to $6.45. In Siberia, Russian crude has changed hands for less than $10 and Chinese domestic prices have fallen to single digits.

Ultra-low oil prices are starting to work: Petrobras, the Brazilian state-run producer, is cutting output by 100,000 barrels a day from high-cost offshore platforms. Glencore Plc., the commodity giant, is shutting down its oilfields in Chad. In Canada, Suncor Energy Inc. has partially shutdown its Fort Hills oil sands mine.

As the pain spreads, industry executives believe many other companies will stem production in the next few days.

“We need to cut crude supply by 10 million barrels a day pretty quickly,” said Russel Hardy, the head of top independent oil trader Vitol Group. “Oil prices will need to go lower, to bring the prices to a level that triggers a response.”

The last time the oil industry faced widespread shut-ins was in 1986, when Saudi Arabia also ravaged the market in a price war. During the price battles of 1998-99 and 2015-16 the industry also saw cuts, but not on a large scale.

Put simply, the world cannot continue pumping at the current level of about 100 million barrels a day while demand is as much as 20% lower. The surplus would overwhelm storage capacity within weeks.

In some emerging markets, where infrastructure is less developed, it’s already happening. Pakistan has told refiners to stop importing gasoline and diesel as the tanks are already brimming.

Where there’s access to the sea, traders use tankers to store oil — and wait for prices to go up. Crude is now moving onto ships at a record pace, according to one of the industry’s largest shipowners.

But inland, producers are reliant on sending crude to local refineries like Coffeyville and the lack of storage capacity will be decisive.

Some producers will prefer to take the hit of negative prices — paying someone to take the oil off their hands — to the long-term costs of shutting down a well. In the aftermath of the last major downturn, a North Dakota sour crude went to a negative 50 cents.

But as storage fills up, production will have to respond. IHS Markit Ltd., a consultant, estimates the Canadian province of Alberta has inland tanks able to store the equivalent of just 3.2 days of daily production. The central U.S., which includes Wyoming, has room for just 12.8 days’ output.

“Production is going to have to be reduced or even shut in,” said Jim Burkhard, head of oil markets at IHS Markit. “It is now a matter of where and by how much.”