Buenos Aires, Argentina – On a sunny Thursday afternoon last month, Gloria Mongelos sat on a plastic chair beside a small, run-down house she had turned into a soup kitchen in Monte Grande, a low-income neighbourhood on the outskirts of Buenos Aires.

Two friends, who had just finished work, dropped by to join her for a mate – a traditional herbal tea that Argentines share from the same cup, using the same metal straw.

The women talked about products that had become more expensive in a country where inflation reached 53.8 percent last year – one of the highest in the world. But overall, there was a feeling in this low-income neighborhood that life was slowly returning to normal, since centre-left President Alberto Fernandez took office last December.

“Prices are still going up, but not drastically like in the past, when electricity and gas bills went up 2,000 percent,” Mongelos, a 51-year-old mother of four, told Al Jazeera.

But the relief people started feeling from those reforms is being rapidly eclipsed by coronavirus containment measures that are exacerbating the country’s economic crisis, heaping more pain upon its financially embattled citizens.

After two years of economic recession, unemployment in Argentina has almost reached 10 percent, and the country is on the verge of yet another debt default. But people were starting to feel brighter days were ahead, before coronavirus struck.

Mongelos had organised a barter club along with other women who met three times a week in a square, where children could run around while mothers traded used clothes and shoes. 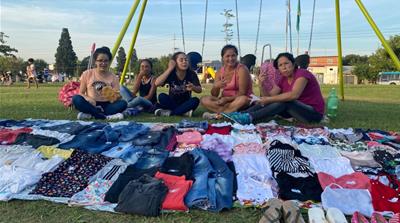 On March 8, when COVID-19 claimed its first victim in Argentina, Mongelos and her neighbours in Monte Grande still saw it as a disease of the elderly and rich who had returned from trips abroad, mainly from Europe. They were more worried about dengue fever – a mosquito-borne viral infection that flourishes in poor urban areas.

Then COVID-19 cases started spreading rapidly, grinding businesses to a halt. The government went from shuttering schools for 15 days and closing borders to non-resident foreigners to ordering mandatory isolation on March 20.

Everyone must stay home now. People are only allowed to venture outside to buy basic goods, such as food and medicine. Pharmacies, grocery stores and supermarkets are still open – but police are out on the streets, stopping those who have no valid reason to be out. Only journalists, healthcare professionals and people working in the food, pharmaceutical and oil industries can go to work.

Many Argentines believe President Fernandez is right to impose drastic containment measures. Every evening, at 9pm, people go out on their balconies for a round of applause for the doctors and nurses on the front lines of the pandemic.

To help cushion the economic blow from the lockdown, the government has introduced a host of measures, including tax breaks for the hardest-hit sectors of Argentina’s struggling economy, and a one-time payment of 10,000 pesos ($155), to the country’s 3.6 million households that depend on one income from a self-employed worker or informal laborer.

The government has also promised to reduce social security contributions by employers, help some industries pay their workers, shore up unemployment insurance, invest an additional $1.58bn in public works and launch a $5.5bn low-cost credit to guarantee the production of food and basic supplies – like cleaning and personal hygiene products and medical equipment.

But experts say it is too little, and that Argentina will unlikely be able to reactivate its economy this year.

Many informal labourers, for example, don’t have bank accounts to receive the newly announced government subsidies.

Sofia Gimenez is a hairdresser in Buenos Aires. The salon she works for is now closed until further notice. And though she will continue to receive a minimum wage, it won’t make her whole.

“Most of our income comes from commissions we get paid, according to the number of clients we have,” she told Al Jazeera.

Argentines are used to ups and downs. The country has a history of defaults – but never in the midst of a pandemic disease.

Before coronavirus hit Argentina, the International Monetary Fund had supported the centre-left government’s claim that it could not pay its creditors until it revived its economy.

“The government was on the right path, distributing money to the needy, who were beginning to consume,” economist and professor at the National University General Sarmiento, Alan Cibils, told Al Jazeera. “With the coronavirus and the lockdown, the whole situation has changed. The priority now is getting over the crisis – only then will we know the extent of the damage and what more has to be done.”

“We are living in a wartime economy, when all efforts are concentrating on fighting an enemy – in this case, an invisible virus,” economist and professor at the University of Buenos Aires, Raul Ochoa, told Al Jazeera.

“This is not the time to negotiate with creditors. World markets are in turmoil, Argentine bonds have plummeted and the country risk has surpassed 4,000, which means the markets do not believe Argentina will be able to pay its debt.”

Experts fear the coronavirus crisis will open the door to “vulture” funds that profit from already struggling economies by buying distressed sovereign debt on secondary markets for pennies of the original issue price – and then taking legal action to press for full repayment or close to it.

Argentina’s debt problems raise pressing, troubling questions about how it will find the resources to invest in healthcare, finance social plans and, at the same time, help private businesses stay afloat and pay their employees, avoiding further layoffs.

“The only choice we have is to issue more money,” Rosendo Fraga, a political analyst and the director of the think-tank Centro de Estudios Nueva Mayoria, told Aljazeera.

In normal circumstances, printing money would be inflationary, but government officials believe these are “measures of exception”, taken during exceptional times.

In Monte Grande, the barter club met one last time before the lockdown.

Policemen now patrol the roads and have detained thousands for breaking the quarantine that will last until at least the end of March.

Mongelos’s soup kitchen is still open, but that sunny afternoon of sharing mate with her friends now feels like a distant memory.

“We’re running out of supplies – not only flour and milk but also alcohol, detergents and masks,” she said, adding that the number of children waiting to be fed has increased. “I see more and more people losing whatever jobs they had.”